ISL 2020-21 Highlights, FC Goa vs Bengaluru FC: Cleiton Augusto scored in the 27th minute and Juanan doubled Bengaluru FC’s lead in the 57th minute as Igor Angulo netted in 66th and 69th minute to draw FC Goa level in match three of the Indian Super League season 7 at the JL Nehru Stadium, Fatorda in Margao. The Gaurs were the most threatening team in attack last season and scored more goals than any other side in the league, while the Blues struggled up front. However, their defence was the best.

Last season’s League Shield winners, FC Goa, who became the first Indian side to secure a direct entry into the group stages of the AFC Champions League, find themselves in an unfamiliar position. With the departure of several key players, many of whom followed former coach Sergio Lobera to Mumbai City FC, the Gaurs, otherwise known for their emphasis on continuity, find themselves in transition. Despite that, they will be hoping to claim their maiden ISL trophy under new head coach Juan Ferrando after acquiring some experienced foreigners alongside promising Indian talent. The onus will be on the long-serving Edu Bedia to help the new arrivals settle fast.

Match Report | Igor Angulo scored a brace to cancel out Cleiton Augusto and Juanan's goals as Bengaluru FC and FC Goa played out a 2-2 draw in the Indian Super League. Read Here. 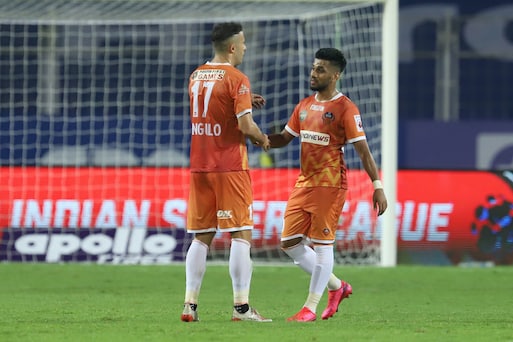 Igor Angulo's brace helps cancel out Cleiton Augusto and Juanan's goals for Bengaluru FC as FC Goa end the night with a draw.

Brandon Fernandes's free kick from a promising area does not yield anything productive as he hits the wall.

Edu Bedia is booked for his rough challnege on Suresh Wangjam. Things are definately heating up in Fatorda.

FC Goa also made two changes as, Lenny Rodrigues and James Donachie came off and in their place came on Aiban and Mougera.

Igor Angulo gets another and FC Goa are level with Bengaluru FC. That makes this interesting.

This time he just needed his chest to guide it into the back of the net.

Igor Angulo gets one back for FCGoa but it is #BengaluruFC still with the lead and the advantage.

Brandon Fernandes gets the pass from Sanson Pereira on the left flank and he in turn passes it onto Alberto Noguera. He finds Igor Angulo with a superb pass and the forward fires it intot the back of the net.

Udanta Singh is replaced by Rahul Bheke for Bengaluru FC.

FC Goa's Seiminlen Doungel and Princeton Arnald Rebello came off and in their place came in Brandon Fernandez and Alexander Romario.

A lovely ball inside the box and Deshorn Brown heads it to Erik Paartalu, who in turn heads it onto Juanan. He volleys it past Mohammad Nawaz.

Igor Angulo goes into the referee's book for his challenge on Francisco Gonzalez.

Meanwhile, Deshon Brown replaced Kristian Fardal Opseth at the start of the second half.

We are back after the break as Bengaluru FC and FC Goa resume their clash.

Here are the stats from the first half -

Cleiton Augusto's goal is the difference between both the teams.

Bengaluru FC will be the happier if the two sides as FC Goa will want to make more forays in their oppositions' half. The Blues's plan to play on the counter has so far been a success.

What a chance for Bengaluru FC!

Cleiton Augusto tries to find Sunil Chhetri with a beautiful back heel but the Indian striker can't make contact as he swings madly to double their lead.

Cleiton Augusto scores to give Bengaluru FC the lead against FC Goa.

Harmanjot Singh Khabra thorws in a deep ball from touch on the left side as Jorge Ortiz tries to head it away but managed to send only to Cleiton, who heads in for his first of the season.

A lot attacks are being snubbed out in mid-field from both teams as the managers have set uo their sides to play on the counter-attack..

Who will beak first?

11' The Blues have a corner after Ashique is dispossessed down the flank. Cleiton heads over to take it. 0-0. #FCGBFC

Ashique Kuruniyan on the charge down the left flanka and after a dodging a takle from a defender cus inside to let go of a shot. His shot is striaght to Mohammad Nawaz in gol for Goa.

Jorge Ortiz attempts get on the ball and go up the left flank but is chopped down by Suresh Wangjam. The first foul of the game.

Heavyweight FC Goa and Bengaluru FC face off in the third match of the season.

A whole lot of changes and debut from both sides but who will be happier of the two teams as they start a brand new challenge on he ISL trophy. Both reached the playoff but failed to qualify for the final and will hope to do better this time around.

Chhetri vs Brandon - Best vs Best!

FC Goa's Brandon Fernandes helped produce 44 chances and seven assists, which were the highest by an Indian player last season.

Bengaluru FC's Sunil Chhetri has the most goals in ISL and scored nine goals last season.

Who will come up on top tonight?

Bengaluru FC have hit the right note outside the field with various initiatives, now it is time for them to do the same on the field. Read Here.

When we said we were taking all of you with us, we meant it. As for some, we will remember them fondly. In our hearts, Harsha. #EverywhereWeGo #FansFirst #WeAreBFC pic.twitter.com/71oOImTLAs

FC Goa have altered their entire foreign contingent barring one but with Juan Ferrando at the helm, their Spanish influence remains. Read Here.

Our game, our turf, our backyard! 🤩

Welcome to the land of Uzzo, the home of the Gaurs, to Goa! 🧡

TEAM NEWS! Debuts for THREE foreign players in Cuadrat's side for tonight's encounter against FC Goa at the Fatorda.

FC Goa have managed to beat Bengaluru FC just once in their seven meetings!

The Gaurs will hope to better their record against The Blues and get another win on that tally.

FC Goa and Bengaluru FC will get their respective Indian Super League campaigns underway when the two sides clash at the Fatorda Stadium. Both sides qualified for the playoffs but fell short of making it to the final last season. They will be eager to go further this season and a win in their opening fixture of the campaign could set them up nicely. 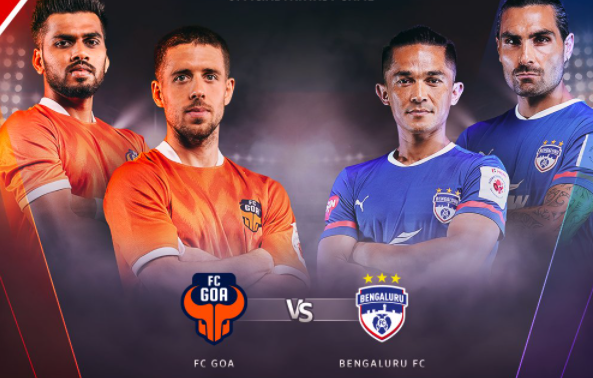 Securing three points on Sunday won’t be an easy task, though. They face a Bengaluru FC side, who have not only retained their core from last season but also further strengthened their squad. Bolstering a foreign contingent that includes the likes of Dimas Delgado and Erik Paartalu are Norwegian striker Kristian Opseth and Brazilian winger Cleiton Silva.

The statistics favour Carles Cuadrat’s side. Since the Blues’ entry into the ISL, Goa have won only once against them in seven meetings. Ferrando, though, is not dwelling on the past. Cuadrat, who is yet to taste defeat against FC Goa as head coach, will be aiming to keep his record intact, with his side unbeaten in their last six games against the hosts, And he knows his side is in for a tough fight.

With Bengaluru conceding just 16 goals last season — the least by any team — and Goa scoring more than anyone, fans are in for an entertaining contest between two heavyweights.