ISL 2020-21 HIGHLIGHTS, Kerala Blasters FC vs ATK Mohun Bagan: Roy Krishna scored the only goal of the match to help ATK Mohun Bagan beat Kerala Blasters 1-0 in the first game of seventh season of the Indian Super League at the GMC Stadium, Bambolim, Goa. It was a tight game for most part punctured by some flashes of brilliance from both sets of players returning after a long break. ATKMB will be a much happier side with all three points in a game in which KBFC would feel hard done by with the kind of chances they got and failed to convert. 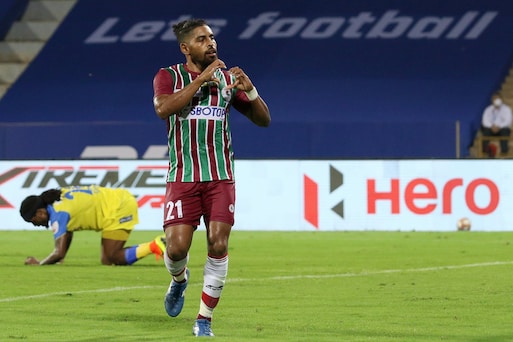 ISL 2020-21: Roy Krishna sored the only goal of the match in the 67th minute as ATK Mohun Bagan defeated Kerala Blasters 1-0 in the Indian Super League.

The 67th-minnute strike gets ATK Mohun Bagan their first win in the ISL and all 3 points.

KBFC's Facundo Pereyra goes in the referee's book for his ill-timed tackle on Javi Hernandez.

Kerala Blaster look desperate to get a goal back and salvage a pint fro mthe game.

86' - Final set of Substitutions for KBFC!

Kerala Blasters make another double change with Sahal Abdul Samad and Bakary Kone comming off as Facundo Pereyra and Lalruatthara come on.

85' | Kibu makes yet another double substitution. 🔁

The celebrations return for Roy and Prabir.

The goal scorer comes off and in his place comes on David Williams!

Costa Nhamoinesu and Edu Garcia are involved in a crash and looks like there was a clash of heads.

Kerala Blasters make two changes as Jordan Murray comes on in place of Sergio Cidoncha and Ritwik Das is replaced by Lalthathanga Khawlhring as both teams take a drinks break.

68' - Roy Krishna gets the opening goal for ATK Mohun Bagan. Who else but the Man from Fiji!

The second change for ATKMB, Manvir Singh is on the ball from the start and makes the right run on the left flank. He dummies past his man and scoops the pass as Roy runs in to strike a thunderous blow at the Kerala Blasters goal.

The fans look on.

They are part of the Fan Wall.

Here is how you can be a part it.

Manvir Singh comes on for ATK Mohun Bagan and in place of Pronay Halder. This might mean a change of formation.

Earlier, Kerala Blasters also made make their first change of the night.

Nongdamba Naorem is off and in his place comes on Seityasen Singh.

Minutes later Sahal has another chance as the ball finds his feet in space inside the box but hi scuffs up the shot and ATKMB sigh relief.

We are back after the break as Kerala Blasters and ATK Mohun Bagan try again to find the first goal of the game!

The game has played out predictably as a game with players returning to competitive football after 'some' time.

Both Kerala Blasters and ATK Mohun Bagan have had some chances but have failed to make it count.

The teams go in level at the break after a closely contested opening 45 minutes.#KBFCATKMB #YennumYellow pic.twitter.com/KhB8bRQc8T

Edu Garcia is late on his challenge on Vicente Gomez and the ATKMB player is shown a yellow card.

Jessel Allan Carneiro takes a shot from afar after some training ground shenanigans. The result is a corner. ATK Mohun Bagan get the free kick.

KBFC's Ritwik with a golden opportunity but he can't break the deadlock.

Pranoy Halder is booked after the restart and shown the first yellow card of the game for his challenge near the halfway line.

Edu Garcia was through on goal but his control fails him in the final moment as Costa Nhamoinesu clears it out the danger.

Roy Krishna takes a short from distance. He was slightly off balance and thus skied his shot in the end. He has in fact not scored against Kerala Blasters. He would want to change that stat!

Time for the coaches to get in a few words in the ears of the Kerala Blasters and ATK Mohun Bagan players.

Bakary Kone climbs high in the air and manages to et his head to ball from corner but directs it in the opposite direction, away from his desired goal. The referee blows his whistle and calls for off-side.

What a chance for defence does it's job!

Roy Krishna is on his bike and gets the slips to let loose a terrific shot. Costa Nhamoinesu though is there at the right place at the right time.

Michael Soosairaj has the perfect chance to play Krishna with ATKMB on the break but he misjudges the weight on the ball and the keeper gathers it again.

Two minutes later, he is at it again on the left flank for ATKMB as he brought down by the KBFC defender.

He looks in pain and can't continue. Subhasish Bose comes on in his place.

Prabir Das has the ball on the right flank and with acres of space in front of him. His ball in the middle is overcooked and Blasters keeper Albino gathers it comfortably.

KBFC pass the ball from the kick-off and after a few nervy passes.

A back pass to the keeper, Albino is slow to react and does well to put in a slide and get the bal back in play.

Sahal get the first challenge on Edu Garcia in the 3rd minute and the from that AKTMB could and get a corner. They could have got ahead early in the opening game. as Roy Krishna ends up scuffing a free shot inside th box.

Kick-off! Here we go! The 7th season of the Indian Super League is underway.

“I am proud to announce that ISL will become the first sporting event of such large scale to be organized in our home country, India. We are overjoyed to bring the League back into your homes once again and broadcast it in over 80 countries outside of India,” says Nita Ambani in a video message to be aired on ISL broadcast Star Sports ahead of the Kerala Blasters FC vs ATK Mohun Bagan game. Read full statement

ATK Mohun Bagan, with the coming together of two champions teams, will be one of the favourites to win 7th season of ISL.

With a new 🟢🔴 armour, @sandeshjhingan is set to face his former side 💪

Kerala Blasters will begin their fresh project with new names and I-League-winning coach in Kibu Vicuna.

Here is the Kerala Blasters Preview for ISL 2020-21: Read Here

With the league becoming the first major sporting event in India to return to stadiums after eight months, this is the third consecutive instance that ATK (this time with Mohun Bagan) will be facing off in the season-opener. Having won the first two instances, can two-time finalists Kerala Blasters get lucky a third time?

Much has changed since these two last met. For Kerala Blasters, there's an element of uncertainty with Kibu Vicuna replacing Eelco Schattorie as head coach. Vicuna, having steered Mohun Bagan to an I-League triumph last season while playing an attacking brand of football, faces his former employers with a point to prove.

Meanwhile, their opponents — as the defending champions of ISL and I-League having joined forces — will start the season as title favourites with Antonio Lopez Habas helming a strengthened squad

With the two Spanish tacticians going head-to-head and with both sides not short of big names, fans can expect a thrilling encounter as football returns amidst the new normal. And with these two rivals always dishing out entertaining fare whenever they've met, there's no better fixture to begin the season with.