Moumita Mishra has been at home for the last couple of months, thinking back to this time last year when she was in Orlando, Florida, representing her country on the world stage. The coronavirus-induced lockdown has meant she has had to stay away from her first and only love - basketball.

The 16-year-old from Bengaluru is biding her time, like many others, and till then she will heed to the advice of 3-time NBA champion Bruce Bowen.

Moumita was one of the many boys and girls from Reliance Foundation Jr. NBA Program, who were part of a session delivered by Bowen on mental health and wellness in the times of coronavirus as part of the virtual Jr. NBA Global Championship. She recalls that Bowen in his session spoke on the importance of working on oneself during this pandemic, as most are unable to train with their teams and coaches.

"He told us that we can focus on our mistakes and work on that. Because once we make sure that we are doing everything that we weren't good at and you make sure that we'll be better players," Moumita tells news18.com.

As for the time lost due to the pandemic, "there's nothing we can do. And that's exactly the negative part that's going to be putting other people down. And the answer is let and gets you worrying about what's going to happen. We should worry about ourselves right now because that's what we can work on," she says.

The session is part of the Jr. NBA Global Championship, which had previously been held at the ESPN Wide World of Sports in Orlando, where the current NBA Season restart is being played, but had to moved virtually due to the coronavirus pandemic.

"To have over 1000 youth from the Reliance Foundation Jr. NBA program participating for the session says a lot about the reach of the program. Additionally, we engaged Jr. NBA Global Championship alumni – i.e. teams and player who competed in the global championship in Orlando last year – to participate in the life skills development session," NBA India’s Lead of Basketball Operations Marc Pulles tells news18.

"We thought it would be a great opportunity to re-engage young athletes who previously participated in the event to lead these meaningful discussions with their peers," adds Pulles. 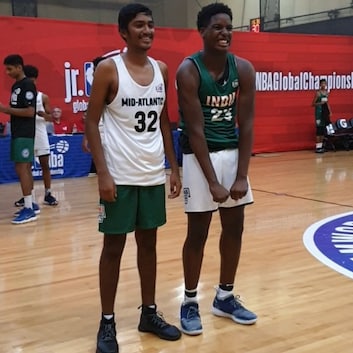 Arnav Gupta, just like Moumita, had been present in the in-person event last year but this year he says the session was equally important and knowledgeable.

"Bruce said that during this pandemic, everything has come to a halt. But still, you should not take this in a negative way. Take this positively and learn to become a better person, better human overall. You can use the pandemic to become stronger and one can be more open and feel better about yourself that you haven't wasted this time period and you have actually worked on yourself," Arnav tells news18.

But Unlike Moutmita, who has not had access to a basketball court yet, 17-year-old Arnav has been training for 2 hour with his parent's help at his society court for around two hours for the last couple of days.

When asked about if the stoppage due to pandemic has made him rethink about basketball, Aranav was quick to reply, "I never thought that because I knew that all bad times come to an end. And this is just another test and the coronavirus will go away."

As for Moumita, she says, "I did think about that a lot. And I realised that if I think about that and not work towards it, because about two months ago, I wasted my time thinking about what I'd be doing, because everything that was happening and I wasn't really working on myself. So I stopped thinking about that and I started working on myself. And I realised that if I just keep doing my work, like on a day to day basis, I will reach where I want to go." Marc Pulles shed more light on the NBA's plans to help their players and students in India to cope during this pandemic.

"Ultimately, the health and safety of our Jr. NBA community – including youth players, parents, coaches and families – is paramount. In the interim, we’re focused on doing all that we can to provide opportunities for young players to stay active and work on their game through ‘Jr. NBA at Home’. We’ve personally seen the power of virtual programming and events in helping youth stay active, engaged and connected to the game," says Pulles.

"With the available flexible online learning solutions technology affords, we continued to do some basic training for our student-athletes of the NBA Academy India and introduced curriculum based online basketball sessions for the NBA Basketball Schools." The head of NBA India added: " At the start of the pandemic we launched Jr. NBA at Home, an interactive content series providing basketball skills and drills featuring NBA and WNBA players that can be completed individually and in limited space. More than 100 current and former NBA and WNBA players and coaches as well as Jr. NBA clinicians and Jr. NBA Flagship Network organization members have supported the cause, sharing drills, workouts and instruction which have garnered more than 116 million views around the world."

"Besides like mentioned earlier, we also got a very good response to our online training sessions of the NBA Basketball Schools. All work and no play makes Jack a dull boy! Children sitting at home are constantly on the lookout for physical activity. Our online sessions serve as a perfect platform giving them a chance to brush up their skills and not lose touch with the game, all from the com fort of their homes. The drills are designed in such a way that it will keep the kids active in a fun way."

As for the Jr. NBA Global Championship, players from around the world will be going up against each other in a series using HomeCourt, a mobile basketball training app that uses advanced artificial intelligence to track key performance metrics such as speed, vertical jump, shot accuracy, release time and ball handling.

The likes of Osheen Singh, Sameeksha Chandak, Shreya Bose and Riccha Ravi represented India while Janmejay Singh was the only boy to take part. ​