The average NBA franchise is now valued at $2.4 billion — a 2% decline year-over-year — but who are the real winners?

For the first time in more than two decades, the average NBA franchise valuation declined year-over-year — now worth USD2.4 billion, a 2% decline. 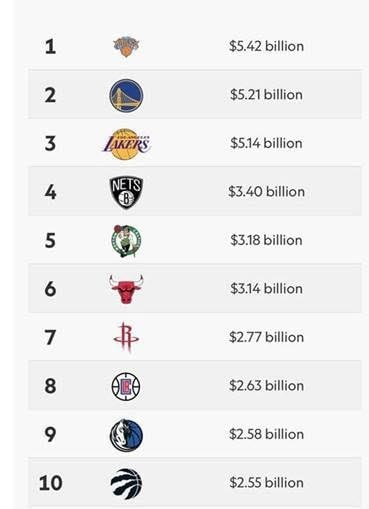 At USD5.42 billion, the New York Knicks are the most valuable franchise in the NBA, despite having the league’s worst record since 2000.

The fair market value of all 30 NBA teams, including ownership’s stakes in real estate, regional sports networks, and additional team-related holdings, is more than USD70 billion. That’s more than the GDP of countries like Bulgaria, Croatia, and Uruguay.

Given below are the top 10 most valuable NBA franchises:

Rather than break down each franchise's valuation individually, let’s focus on — the Golden State Warriors.

After drafting Stephen Curry in 2009, the team started winning — making the playoffs for nine straight years, participating in the NBA Finals five straight times, and winning three world championships in the process.

The Warriors now rank among the top of the league in home-game attendance and saw their revenue skyrocket accordingly. At USD430 million last year, no team in the NBA brought in more revenue than the Warriors.

Here’s how the Warriors revenue has trended over time and their financial success afforded them the expansion. Unlike their in-state rival Los Angeles Lakers, the Warriors own, operate, and even act as landlords to corporate partners like Uber on the property. In total, Sportico values the Warriors’ team-related business and real estate assets at USD1.5 billion, which is 50% more than any other NBA franchise.

Comparing it to other NBA franchises' overall growth rate to see how the Warriors just happened to grow faster.

Here’s an example: The average NBA franchise valuation has grown from USD365 million in 2010 to USD2.4 billion today — an increase of 557%. And Golden State Warriors have seen their valuation increase more than 1,000% in the same time period, from USD450 million to USD5.2 billion.

In the end, the Warriors benefited from a unique combination of timing, overall league growth, winning, and real estate. With the team projecting an annual revenue target of USD800 million in the next decade — slightly less than 2x their current revenue— the Warriors might just be getting started.