Olympics News Live updates: Hello and welcome to our live coverage of the build-up to the 2020 Tokyo Olympics. Three athletes belonging to three different countries were ruled out of the Olympics after testing positive for COVID-19 here on Wednesday, less than two days before the showpiece opens amid mounting health safety concerns. Chilean Taekwondo player Fernanda Aguirre, Dutch skateboarder Candy Jacobs and Czech TT player Pavel Sirucek were on Wednesday forced to withdraw from their respective events and placed in quarantine.

Sweden has once again stunned the United States at the Olympics, this time with a 3-0 victory in the women’s football tournament. The Americans, ranked No. 1 in the world and the favorites to win in Tokyo, were riding a 44-match unbeaten streak.

Wrong entries in the health status application caused a COVID-19 scare in the Indian camp at the Tokyo Olympics on Wednesday. The deputy chef de mission Prem Verma though clarified that no one has shown symptoms for the virus and there was no positive case.

IOA President Narinder Batra asked for a clear picture from deputy chef de mission Verma after Health Report App (OCHA) showed three Indian officials with symptoms but the other app did not have any such detail. Verma replied that "no one showed symptoms and there was inadvertent wrong entries by first time users".

"Wrong entries in health record updating. No positive cases. If you make wrong entries in updation of your health record, then it leads to raising of the alarm by software and the CLO gets a mail to resolve it. "For example if by mistake you record your temperature as 38 celsius, then CLO will be alerted by the infection control software. There is no positive case in Team India," Verma said.

Indian badminton star B Sai Praneeth caught up with Tennis World No. 1 Novak Djokovic in Tokyo!

Six Polish swimmers were sent home from the Olympics after the country’s swimming federation committed an administrative error and sent them to Tokyo even though they had not qualified for the Games.

The sun sets in Tokyo and the host city looks majestic!

We can't get enough of these Tokyo sunsets! 😍⁠⁠
⁠⁠
Just one more sleep until #Tokyo2020...⁠⁠
⁠#StrongerTogether #Olympics⁠⁠
⁠⁠ pic.twitter.com/DvWXXDs6qj

India paddlers were handed tough draws at the Tokyo Olympics with the mixed doubles pairing of Sharath Kamal and Manika Batra pitted against third seeds Lin Yun-ju and Cheng I-Ching of Chinese Taipei on Saturday. Batra, ranked 62, though got an easy women's singles first round where she will face Great Britain's Ho Tin-Tin, ranked 32 places below the Indian.

The Indian, should she win the opening round, will lock horns with Ukraine's Margaryta Pesotska next. Sharath and Manika had sealed the Olympics berth in mixed doubles after beating world number eight Korean Sang-Su Lee and Jihee Jneon in the final of Asian Olympic Qualification Tournament in March. 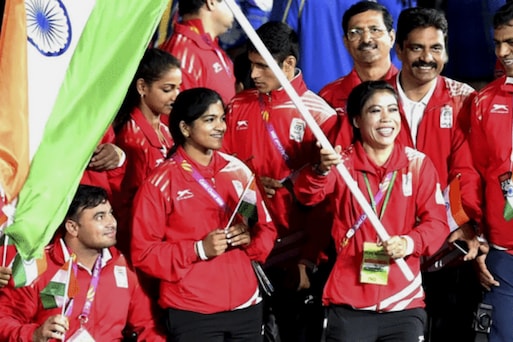 IOA secretary general Rajeev Mehta said not many Indian athletes will be at the Tokyo Olympics opening ceremony keeping in mind the risk of infection. The opening of Tokyo 2020 will be a moment of joy and relief, said the head of the International Olympic Committee on Wednesday. With two days to the official opening of the 32nd Olympic Games, the president of the IOC, Thomas Bach, told reporters that when athletes will enter the stadium on Friday 23rd of July, it will be “a moment of joy in particular for the athletes because I know how much they are longing for this moment and that they can finally be there, they can enjoy this moment under very special circumstances, and a feeling of relief because no need to tell you the road toward this opening ceremony was not the easiest one."

Three athletes belonging to three different countries were ruled out of the Olympics after testing positive for COVID-19 here on Wednesday, less than two days before the showpiece opens amid mounting health safety concerns. Chilean Taekwondo player Fernanda Aguirre, Dutch skateboarder Candy Jacobs and Czech TT player Pavel Sirucek were on Wednesday forced to withdraw from their respective events and placed in quarantine.

.@JemiRodrigues shows her support for our athletes at @Tokyo2020. 👍 👍 The biggest sporting spectacle is back. The Tokyo Olympics mark the 32nd time the Games will beheld since their rebirth as a modern event in 1896. Here's all you need to know about the Games. With Tokyo Olympics just around the corner, high temperatures are likely to be an additional challenge for athletes.

Men's World No. 1 Tennis star Novak Djokovic is in Tokyo!

Djoker in the house🃏

Top-ranked shooter Amber Hill has tested positive for COVID-19 at home in Britain and will miss the Tokyo Olympics.

The world No. 1 in women’s skeet says: “There are no words to describe how I’m feeling right now.”

Hill’s event is scheduled on Sunday and Monday and no shooter will take Britain’s entry as her replacement.

She says: “I don’t have any symptoms, I will now isolate as per the government guidance.”

Hill reached the semifinals in skeet at the 2016 Rio de Janeiro Olympics. Mexican Olympic baseball players Héctor Velázquez and Sammy Solís have tested positive for COVID-19 and been isolated at their rooms in the team hotel in Mexico City. The Mexican Baseball Federation and the Mexican Baseball League issued a joint statement saying that the two had positive PCR tests when reporting on Sunday but are asymptomatic.

India is sending its largest-ever contingent!

The Tokyo Olympics opening ceremony is on 23rd July!

Japanese pilots drew the five Olympic rings over Tokyo in a practice flight ahead of a similar manoeuvre which is scheduled for later this week to mark the official start of the Tokyo Games.

Four-time Olympic champions the United States crashed to a 3-0 defeat by Sweden in their opening match of the women's football tournament in Tokyo on Wednesday, snapping a 44-game unbeaten run going back to January 2019.

Stina Blackstenius scored twice before substitute Lina Hurtig headed in a third for the 2016 silver medallists as the US lost for just the second time over 90 minutes at the Olympics on their seventh appearance.

Britain has opened the Olympic women’s soccer tournament with a 2-0 victory over Chile. Lauren Hemp’s header put the ball in front of Ellen White for a close-in goal in the 18th minute. White’s second goal was a volley to the far post in the 75th. 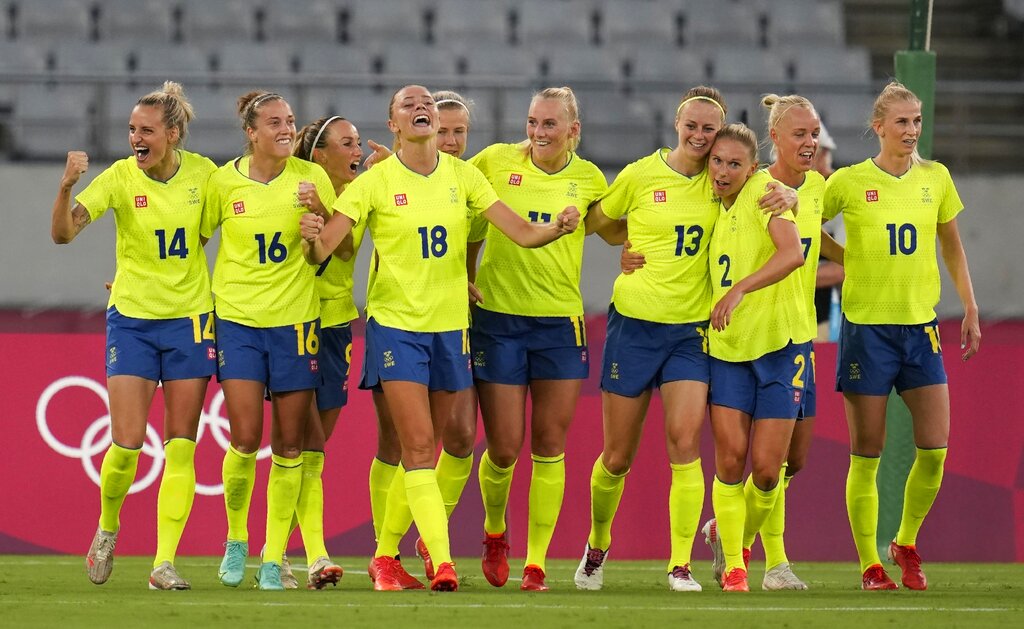 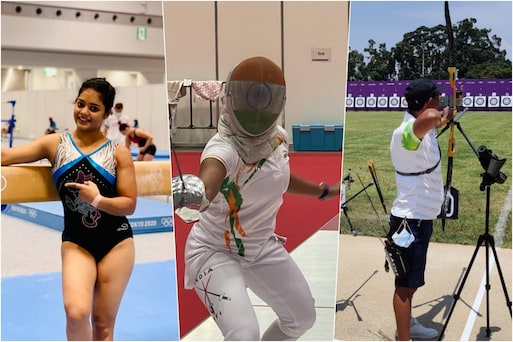 Indian athletes gear up for the Tokyo Olympics Olympic events will be staged across the state of Queensland, including in Gold Coast, which hosted the 2018 Commonwealth Games.

On the eve of the Tokyo Olympics’ opening ceremony, the government’s attempts to curb a coronavirus surge by targeting drinkers is drowning in liquor, frustration and indifference. Japan has asked the city’s restaurants and bars to close by 8 pm, if not entirely, to keep people from socializing in close contact with strangers and spreading the virus, but the state of emergency hasn’t deterred many. Instead, drinkers moved outdoors, and many bars in Tokyo’s famed nightlife districts are bustling with defiant customers.

India’s hockey team will be inspired in their bid for Olympic glory by the heroes of the sport who lost their lives in the coronavirus pandemic, says goalkeeper PR Sreejesh.

13:14 (IST)
France, Argentina and Every Other Men’s Football Teams of Tokyo Olympics Matches will be played across six different venues in Japan – Kashima, Rifu, Saitama, Sapporo, Tokyo, and Yokohama. The final will be at Tokyo's Olympic Stadium.

From being rejected as an emaciated 12-year-old kid, to throwing a challenge to prove herself in three months’ time to India’s top medal prospect at Tokyo Olympics, world no 1 archer Deepika Kumari is a story of grits, guts and gumption. A journey that started from Arjun Munda’s Academy in Kharsawan, a small town surrounded by the idyllic Chandil-Gamharia forest range, rose to prominence at the Tata Archery Academy which later became her ‘second home’.

Four competitors including a shooting world number one saw their Tokyo Olympic dreams dashed on Wednesday after testing positive for the coronavirus.

British shooter Amber Hill, top-ranked in the women’s skeet, was forced to pull out before she departed for Japan after testing positive.

“After five years of training and preparation, I’m absolutely devastated,” she said in a team statement.

Table tennis player Pavel Sirucek became the third member of the Czech delegation to test positive for Covid-19 in the Athletes’ Village, the team said.

The Tokyo Olympics are being staged in biosecure “bubble” conditions, with athletes tested daily and under orders to stay socially distanced and wear masks when not competing, training, eating or sleeping.

But the latest cases show that competitors are treading a fine line.

Chilean taekwondo competitor Fernanda Aguirre was “devastated and very sad”, she said on social media, after testing positive on arrival in Japan from a training camp in Uzbekistan.

“(She) is asymptomatic and in good health, but unfortunately will not be able to compete because the Japanese authorities impose a 10-day quarantine,” a Chilean Olympic committee statement said.

The 21-year-old, who won a bronze medal at the 2019 Pan American Games, has been moved to an isolation facility, as has her coach.

Meanwhile Dutch skateboarder Candy Jacobs described herself as “heartbroken” after she too was forced out.

Jacobs said on Instagram she had “done everything in my power to prevent this scenario and took all the precautions”.

“Unfortunately I was tested positive for Covid-19 this morning, which means my Olympic journey ends here,” the 31-year-old said.

A Czech staff member also failed a test upon landing in Tokyo.

“We are terribly sorry about the situation,” said Czech team head Martin Doktor.

Sirucek’s positive test was announced only minutes before the draw of the table tennis tournament, meaning he is denied a first appearance at an Olympics.

“I was afraid there would be sports tragedies. But no one can really influence the spread of the virus, despite all the measures,” Doktor said.