Olympics News Updates: IOC’s refugee team head Tegla Loroupe has been revealed as the one to test positive for coronavirus due to whom the team delayed its arrival in Tokyo. Three athletes tested positive at the Olympic Village for Covid-19, Tokyo Olympic organisers said on Sunday, a day after an Olympic Village resident had tested positive.

Tokyo Olympics organisers on Sunday reported three new cases of COVID-19 infection among athletes, up from one new case a day earlier, as the population of the athlete’s village swells ahead of the start of the pandemic-hit Games next week.

The Indian women’s doubles combination of multiple-time Grand Slam winner Sania Mirza and Ankita Raina had its final practice for the upcoming Tokyo Olympic Games in Hyderabad. The duo trained at the Sania Mirza Tennis Academy in Hyderabad before they leave for Japan.

Wimbledon finalist Matteo Berrettini of Italy has pulled out of the Tokyo Olympics due to a thigh injury, the 25-year-old said on Sunday. The world number eight had his left thigh bandaged during his defeat by top-ranked Novak Djokovic of Serbia in the final of the grasscourt Grand Slam earlier this month. The Italian National Olympic Committee said they would not be able to get a replacement player for Berrettini as the International Tennis Federation’s deadline to name new athletes had passed on Friday.

Six British track and field athletes and two staff members have been forced to isolate after being identified as close contacts to an individual who tested positive for COVID-19 on their flight to Japan, the BOA confirmed on Sunday. “The British Olympic Association (BOA) can confirm that six athletes and two staff members from the athletics team, who through no fault of their own have been identified as close contacts of an individual — not from the Team GB delegation –who tested positive for COVID-19 on their inbound flight on 15 July 2021," the BOA said in a statement.

The Olympic refugee team will start arriving in Tokyo later on Sunday, the International Olympic Committee said, ending speculation about their participation after one team official had tested positive for COVID-19 in a training camp in Qatar. The 26 of the total 29 refugee athletes that form the team had been in a training camp in Qatar and had to delay their departure for Tokyo earlier this week following the positive case.

As the opening of the Tokyo Olympic Games is approaching, all eyes are on how the Games will be safely and successfully held in the midst of the COVID-19 pandemic. For overseas Olympians, the efforts to keep them safe start at the Narita International Airport, Japan’s major gateway, as they are kept inside a “bubble" from others before they leave for their next destination.

Former distance runner Tegla Loroupe, the chief of mission for the IOC's Refugee Olympic Team, has tested positive for COVID-19, two people with knowledge of her condition have told The Associated Press. Loroupe tested positive before the team was to depart its Doha, Qatar, training base for Tokyo. The team has delayed its arrival in Tokyo where the Olympics open on Friday because of Loroupe's positive test. Team members are expected to start departing in the next few days, but Loroupe is expected to stay behind, according to the sources.

Mary Kom is in Tokyo!

Our Indian Contingent arrives at the #Tokyo2020 Games village.

People march in Tokyo's Shinjuku shopping district to protest against the  Olympics! 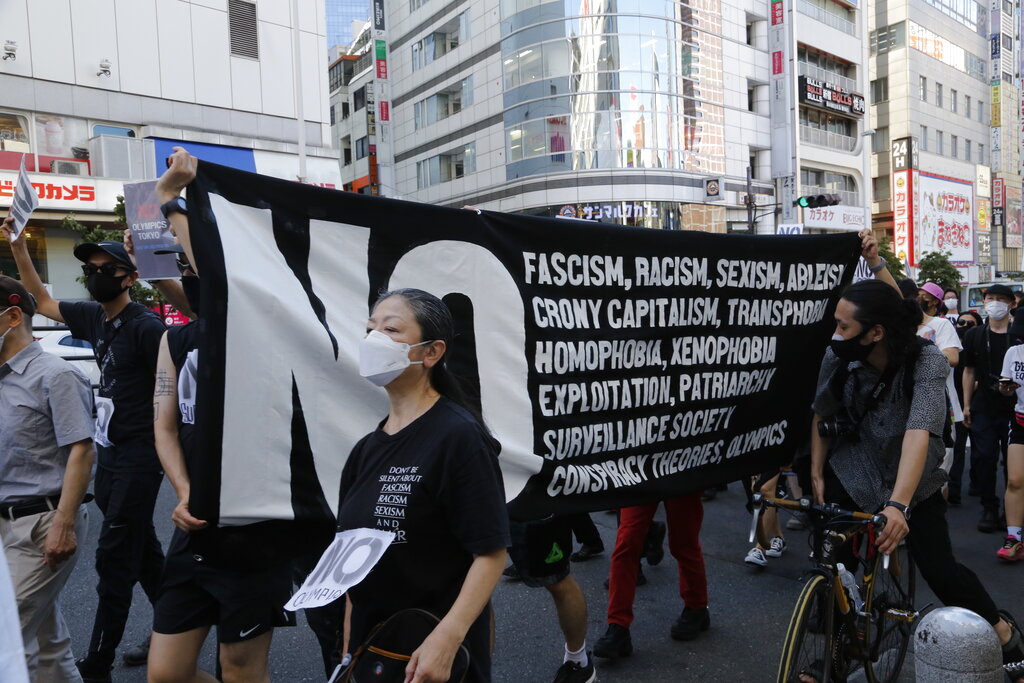 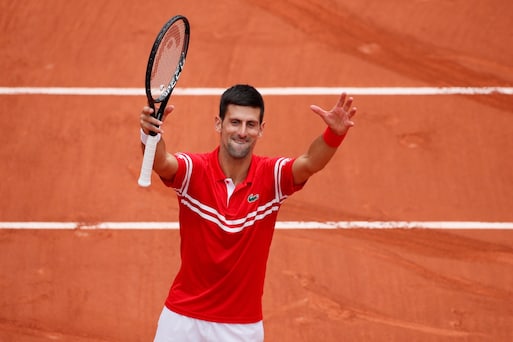 South Africa have confirmed three positive COVID-19 cases in their football squad for the Olympic Games in Tokyo, including players Thabiso Monyane and Kamohelo Mahlatsi.

A 30-year-old Uzbek man was arrested Sunday on suspicion of raping a woman in the Tokyo Olympic Stadium last week just days before the Games begin, according to police and media reports. The man, a university student identified as Davronbek Rakhmatullaev, allegedly raped the victim in her 20s on Friday night, the Tokyo Metropolitan Police Department told AFP without specifying the location. Local media said the suspect got to know the Japanese woman on the day and attacked her near spectators' seats at the stadium after they watched a rehearsal of the Olympic opening ceremony.

A Shikhar Dhawan-led side will take on Sri Lanka in Colombo. Follow Live

#TeamIndia captain @imVkohli is cheering for our athletes at @Tokyo2020 👍 👍

The Indian contingent is on their way to the Olympic Village after their formalities were completed at the Narita international airport in Tokyo.

Our Indian Contingent is off to the #Tokyo2020 Games village! 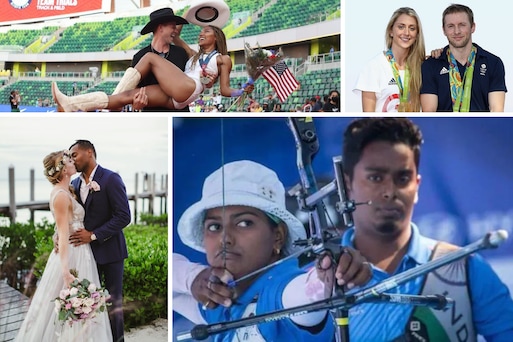 Here we take a look at seven couples, who will be competing at Tokyo Olympics together.

Days before the start of the Tokyo Olympics, there was a panic situation in the Australian Games-bound athletics contingent after an inconclusive test of an official forced the squad be placed under quarantine in their rooms for hours at their training base in Cairns.

MOCCO, a 10-meter giant puppet, is controlled by performers during an event hosted by the Tokyo Organising Committee of the Olympic and Paralympic Games at the Shinjuku Gyoen park in Tokyo.

The puppet created by children in the Tohoku region traveled from the region to bring messages and the culture of Tohoku to Tokyo, its destination, as part of projects under the theme of "the Reconstruction of Tohoku." 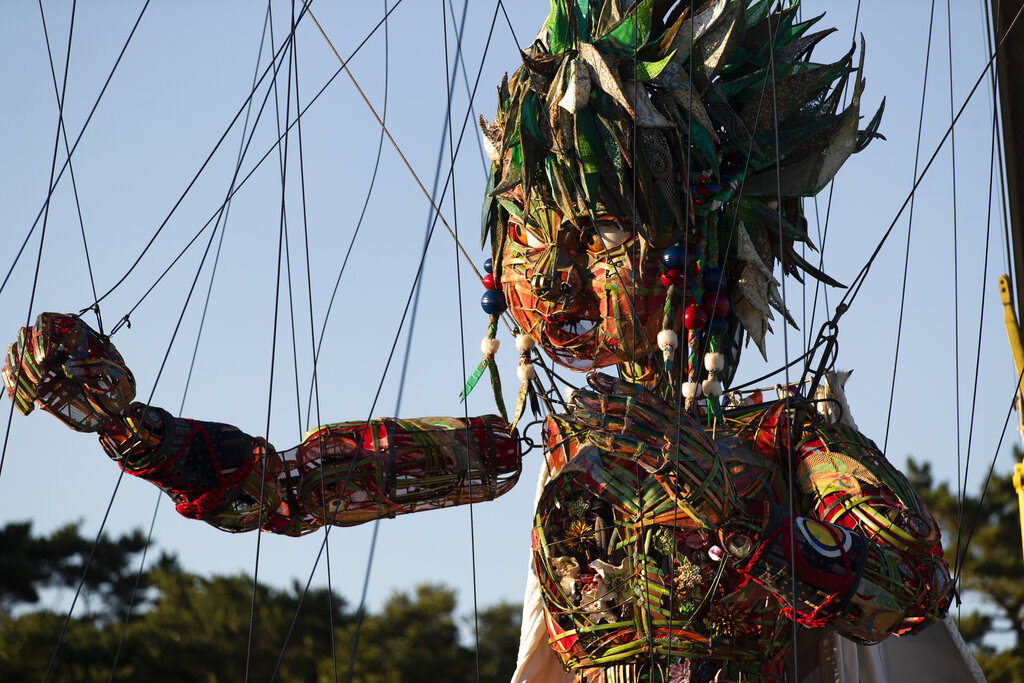 The three infections were revealed as competitors fly in from around the world for the pandemic-delayed Olympics, which are facing significant opposition in Japan due to their Covid risks.

Tokyo 2020 spokesman Masa Takaya said the three cases "were from the same country and sport". They are "isolated in their rooms and Tokyo 2020 is delivering meals to them", he said, adding that the rest of the team have also been tested. The team was not identified. 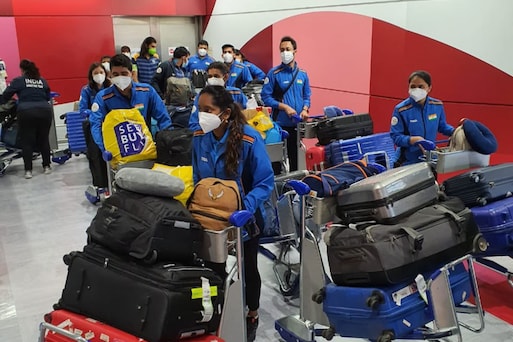 The first batch of India's contingent of 88 members comprised 54 athletes, besides support staff and IOA representatives, reached the Narita international airport in Tokyo.

Organizers say since July 1, 55 people linked to the Olympics have reported positive tests. This accounting does include athletes or others who may have arrived for training camps but are not yet under the “jurisdiction” of the organizing committee.

The Olympic Village on Tokyo Bay will house 11,000 Olympic athletes and thousands of other support staff.

Tokyo recorded 1,410 new COVID-19 cases on Saturday, the highest in six months. It was the 28th straight day that cases were higher than seven days previous.

The first batch of the Indian contingent for the Tokyo Olympic Games, including members of the men's and women's hockey teams, PV Sindhu and the archery team left for Japan late on Saturday.

Sports Minister Anurag Thakur was present at the send off...

• Send off given to the 88 member strong Indian Olympics contingent. #Cheer4India #Tokyo2020 pic.twitter.com/1NtNZNr5In

An International Olympic Committee member from South Korea has tested positive for the novel coronavirus after arriving in Tokyo for the Olympic Games and has been isolated.

Ryu Seung-min, who won the Olympic table tennis gold in men's singles in 2004, was diagnosed with the virus after landing at Narita International Airport on Saturday.

"The IOC has been informed about the positive COVID-19 test result of IOC member Ryu Seung-min upon arrival in Japan," an IOC spokesperson told Reuters.

"He is currently in the isolation facility, where he will stay until the Japanese authorities decide that he is able to leave his room.

"The IOC is relieved to hear that all protocols have been properly followed which led to the detection of the case. We wish him a speedy recovery."

Olympics organisers on Saturday reported the first case of COVID-19 at the athletes' village, along with 14 other new cases connected to the Games that begin next week, raising fresh doubts over promises of a "safe and secure" event.

Ryu, who is part of the IOC's athletes' commission, said he had tested negative twice before travelling to Japan.

"I am completely asymptomatic, which probably has to do with the fact that I am vaccinated," local media in South Korea quoted Ryu as saying in a social media post which was subsequently deleted.

"I apologise to the Organising Committee, our hosts here in Japan, and the IOC for the inconvenience I have caused. My case is just another proof that the system put in place to protect all of us is effective."

The 2020 Games was postponed for a year due to the global pandemic and is being held mostly without spectators and under tight quarantine rules.

A protester is surrounded by police during a rally against the Olympic and Paralympic Games in Tokyo. 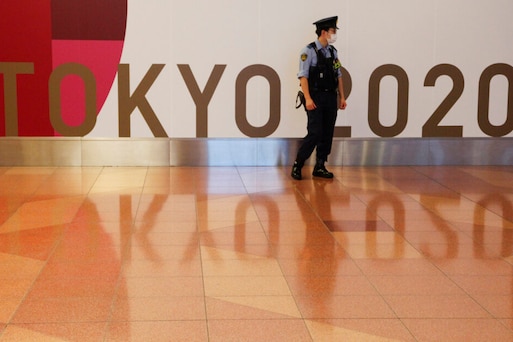 A day after an unidentified person tested positive for Covid-19 in the Olympic Village, Tokyo 2020 officials confirmed two atheles have contracted the virus.

✨ 5 Days To Go! ✨ We're inching ever closer to the start of the #Tokyo2020 @Olympics #StrongerTogether #UnitedByEmotion pic.twitter.com/BFGDiV4ef6

The first cases involving athletes in the Village come a day after a member of their entourage returned the first positive test in the complex, which will house thousands of athletes.

The three infections were revealed as competitors fly in from around the world for the pandemic-delayed Olympics, which are facing significant opposition in Japan due to their Covid risks.

Tokyo 2020 spokesman Masa Takaya said the three cases “were from the same country and sport”. They are “isolated in their rooms and Tokyo 2020 is delivering meals to them”, he said, adding that the rest of the team have also been tested. The team was not identified.

The Olympic Village, a complex of apartments and dining areas in Tokyo, will house 6,700 athletes and officials at its peak when the delayed 2020 Games finally get underway.

The Tokyo Games, which will be held largely behind closed doors to prevent infections, are unpopular in Japan where opinion polls have consistently demonstrated a lack of support.

Olympic officials have been at pains to play down the health risks of the Games, which are taking place in stringent anti-coronavirus conditions with athletes tested daily.

“Mingling and crossing of populations is very limited. We keep the risk to an absolute minimum level,” Olympic Games executive director Christophe Dubi said on Sunday.

“We can ensure that transmission between the various groups is almost impossible.”

Fifty-five cases linked to the Games, which open on Friday, have been discovered this month, including four athletes.

South Korean IOC member Ryu Seung-men tested positive on arrival in Japan and was placed in isolation, a spokesman for the Olympic body said.

Athletes are arriving to find a restrictive environment, with daily testing, social distancing and no movement possible outside the Olympic “bubble”. They are under orders to leave Japan 48 hours after their event.

In another example of the difficulties, Australia’s entire athletics team was quarantined before departure after a member of their entourage returned an inconclusive test. The official later tested negative.

“We expect that there’ll be cases associated with these Games and really what’s going to matter is how we respond to that and to ensure that there’s no complacency,” said David Hughes, medical director of the Australian Olympic team.

Australia has 194 athletes in the Olympic Village backed by support staff including psychologists to help them deal with the “extra strain” of the anti-Covid measures.

Australian basketball star Liz Cambage was one of the athletes to pull out of the Games, citing mental health fears, while tennis player Nick Kyrgios withdrew due to the lack of fans.

Australian chef de mission Ian Chesterman said a “buoyant” mood in the camp was tempered by caution over possible mental health problems in the unusual environment.

“The mood and everything is sort of buoyant and excited to be here, and that we’re conscious of the fact that it’s like no other,” he said.

“We have to make sure that athlete, mental health and wellbeing is at the forefront of all their thinking.”

Japanese and Olympic officials have also been forced onto the defensive over a welcoming reception for Bach attended by 40 people while Tokyo remains under a coronavirus state of emergency.