Reigning champions Bengaluru Bulls will battle UP Yoddha in Eliminator 1 of the Pro Kabaddi Season 7 playoffs. In their two meetings this season, UP Yoddha emerged victorious on both occasions, winning 35-33 the first time before beating the defending champions 45-33 in the final game of the league stage. LIVE STREAM

And we've got our 3rd Semi-Finalist in @BengaluruBulls, after a thriller that went into extra-time!

Bengaluru Bulls are through to the semi-final!

Monu Goyat gets a bonus and a touch on Ankit.

Pawan Sehrawat gets touches on Shrikant Jadhav, Monu Goyat. UP are ALL OUT!!

Rishank Devadiga gets a touch on Amit Sheoran. SUPER 10!

Pawan Sehrawat gets a touch on Nitesh Kumar.

Rishank Devadiga gets a touch on Mahender Singh.

Rohit Kumar is tackled by Sumit.

Sumit Singh gets a touch on Surender Gill

What is a Golden raid?

What is a Golden Raid

What happens if there is a tie in the play-offs? Here are the rules...

Surender Gill gets a touch on Ankit.

Bengaluru's Sumit Singh gets a touch on Nitesh Kumar.

Pawan Sehrawat gets touches on Rishank Devadiga, Surender Gill. SUPER 10! UP are ALL OUT!

Pawan Sehrawat puts in an empty raid and so does Surender Gill.

Sumit Singh in the DO OR DIE raid gets a touch on Sumit.

Shrikant Jadhav in the DO OR DIE raid gets touches on Pawan Sehrawat, Mahender Singh.

Sumit Singh gets a touch on Amit.

Sumit Sigh gets a touch on Ashu Singh.

Shrikant Jadhav gets a touch on Amit Sheoran.

Pawan Sehrawat gets tackled by Amit.

Surender Gill puts in an empty raid and so does Sumit Singh.

Shrikant Jadhav in the DO OR DIE raid gets tackled by Mahender Singh.

Sumit Singh gets a touch on Sumit.

Surender Gill puts in an empty raid and so does Sumit Singh.

Surender Gill gets a bonus point but is tackled by Rohit Kumar.

Pawan Sehrawat gets a touch on Amit.

Monu Goyat gets a bonus point.

Rishank Devadiga gets a touch on Rohit Kumar.

Rohit Kumar puts in an empty raid and so does Shrikant Jadhav.

Rohit Kumar in the DO OR DIE raid gets tackled by Sumit. 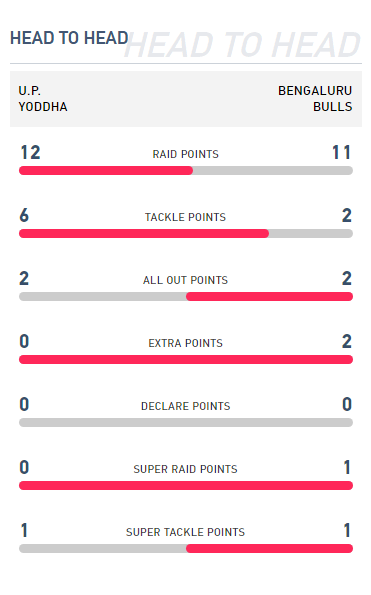 UP's Shrikant Jadhav gets a touch on Saurabh Nandal.

Bengaluru's Rohit Kumar gets a touch on Ashu Singh.

Rohit Kumar too comes back empty-handed.

Surender Gill in the DO OR DIE raid doesn't get a point.

Pawan Sehrawat gets touches on Nitesh Kumar, Narender. UP are ALL OUT!

Shrikant Jadhav gets a bonus point.

Pawan Sehrawat gets a touch on Sachin Kumar.

UP have started well and pulled ahead of Bengaluru, as the trio of Rishank Devadiga, Shrikant Jadhav and Surender Gill combined well to raid the opposition's half with better success than the lone exploits of Pawan Sehrawat.

Without Pawan, Bengaluru was also ALL OUT once!

The contest between Pawan Sehrawat and Nitesh Kumar will the one to watch out for as UP Yoddha face Bengaluru Bulls. After struggling to find form early in the campaign, raider Shrikant Jadhav came into his own in the second half of the season and emerged as U.P. Yoddha's best raider with 139 raid points to his name. His best performance of the season came against Puneri Paltan in Match 61, where he scored 15 points and led his team to victory.

While Shrikant has been the team's lead raider, the likes of rookie Surender Gill and the experienced Rishank Devadiga have provided good support throughout the season, having scored 66 and 64 raid points respectively.

For the third season running, Left Cover Mahender Singh has been the team's most successful defender. He has scored 55 tackle points in 19 appearances this season, with his best performance coming against Telugu Titans in Match 31, where he finished with 7 tackle points.

Corner duo Amit Sheoran and Saurabh Nandal have combined to score 100 tackle points this season and are one of the most potent Corner combinations in the league. Bengaluru Bulls' defence is especially good in Super Tackle situations and has managed 26, which is the fourth-most this season.

Reigning Most Valuable Player Pawan Sehrawat delivered another incredible campaign which saw him set a new league stage record of 308 raid points, as he led Bengaluru Bulls to the playoffs. He is currently on a run of 10 straight matches with a Super 10, which includes his 39-point performance against Haryana Steelers.

The rest of the raiding unit has failed to impress this season. Skipper Rohit Kumar finished the league stage with just 88 raid points, while Sumit Singh has scored 48 in his limited opportunities. Bengaluru Bulls will hope that Rohit and Sumit can up their game in the playoffs and provide some support to their talisman Sehrawat.

UP Yoddha's strength this season has been their defence and Left Corner Sumit has been the star of that unit. The rookie defender has the third-most tackle points this season and has been in brilliant form throughout the campaign.

His partner on the other side, Right Corner Nitesh Kumar has also had a tremendous campaign and is trailing his teammate by just two tackle points on the leaderboard. Given the duo's performances, it is no surprise that U.P. Yoddha are the league's second-best defensive unit with 246 tackle points to their name, and they will be a key competent in determining how far the team goes in the playoffs.

UP Yoddha take on Bengaluru Bulls in the first eliminator of the PKL playoffs at the EKA Arena by TransStadia in Ahmedabad.

The Winner of PKL 2019 First Eliminator will meet Dabang Delhi on October 16, Wednesday in the semi-finals clash.

Passion, drama, thrill, excitement, intensity... we're running out of adjectives to use for the #VIVOProKabaddiPlayoffs!

After starting the season with just three wins in their opening 10 matches, UP Yoddha found themselves in a spot of bother in the league stages. However, they rallied back to win 10 of their remaining 12 matches and picked up 52 points out of a possible 60 to finish third in the vivo Pro Kabaddi Season 7 standings and qualify for the playoffs for the third season running.

The defending champions started the season brightly with four wins in five matches but followed that up with two wins in the next seven. They managed four wins and a tie in their subsequent seven matches to qualify for the playoffs but finished the campaign with two straight losses to Jaipur Pink Panthers and UP Yoddha.