PKL 2021-22 Final Live Score and Updates: When and where to watch, Live Streaming, match timings, venue for the PKL Final, Patna Pirates vs Dabang Delhi. Stay tuned for all the latest updates.

PKL’s most successful franchise, the Patna Pirates, are looking to claim the throne for the fourth time in franchise history, while Dabang Delhi will be eyeing that elusive title a season after Read More

Monu gets a point as Manjeet Chillar messed up his tackle. Naveen puts in an empty raid. Mohammadreza Shadloui, in pursuit, gets a bonus. Vijay, in the do-or-die, gets a touch on Sunil.

Naveen comes back without a point. Monu gets a bonus as Vijay gets two touch points as well as a bonus. Super 10 with a Super Raid! Monu gets another bonus. Delhi challenge and it is unsuccessful. Naveen puts in an empty raid, taking up a lot of time.

Monu gets a touch point and also a bonus, after some deliberation. Delhi review and it successful.

PKL Final Live - Patna All Out

Neeraj Kumar gets tackled and Patna are ALL OUT! Delhi ruling the mat… Vijay gets another 2 points.

PKL Final Live - We are Level

Vijay is not giving up easily as he gets a bonus and two touches! Guman Singh puts in an empty raid. Naveen gets a touch point.

Naveen Kumar gets slammed down by a huge tackle by Mohammadreza Shadloui. Sachin puts in an empty raid. Sachin gets a touch point. Guman comes back empty handed and so does Vijay. Sachin, in the do-or-die raid, gets a touch on Sandeep Narwal.

Ashu Malik and Monu put in empty raids. As Ashu looked helpless as Patna defender fell backwards and stepped out. Monu comes back empty handed. A technical foul due to wrong sequence of revival. Naveen Kumar puts in an empty raid. Guman Singh, in the do-or-die raid, gets two touch points.

Naveen Kumar, in the do or die raid, gets tackled but it is one point each as the Patna defender was off the mat. Sachin, in his own do or die, goes in and gets a quick touch point. Vijay gets tackled as Sachin makes up the difference again. Naveen Kumar also gets a point.

PKL Final Live - Naveen in Do or Die

Patna’s Guman Singh gets a bonus as Ashu Malik put in an empty raid. Naveen Kumar gets a touch point in the do or die as Prashanth Kumar is tackled to the ground.

Naveen Kumar gets a touch Mohammadreza Shadloui, which the latte vehemently protests. A point is given to Delhi but Patna review. It is unsuccessful!

PKL Final Live - Delhi All Out

Sandeep Narwal gets a bonus points but steps out of bounds and Delhi are ALL OUT! Patan are starting to get a good lead.

Naveen Kumar is tackled and Sachin puts in another empty raid. Vijay too. Guman Singh and Vijay get bonus points, Joginder gets tackled in the do-or-die raid to get the lead.

Naveen Kumar gets a touch point on Mohammadreza Shadloui! Sachin too is not going down easily and gets a running hand touch.

Naveen Kumar gets successful raids with bonus points. Sachin gets a hand touch as Naveen Kumar and Guman Singh put in empty raids.

Sachin puts in empty raids as Naveen Kumar gets a bonus. Prashanth Rai gets a point as Vijay gets a touch point.

PKL Live - Who will be the Victors on the Night?

Who will walk away as the winners? 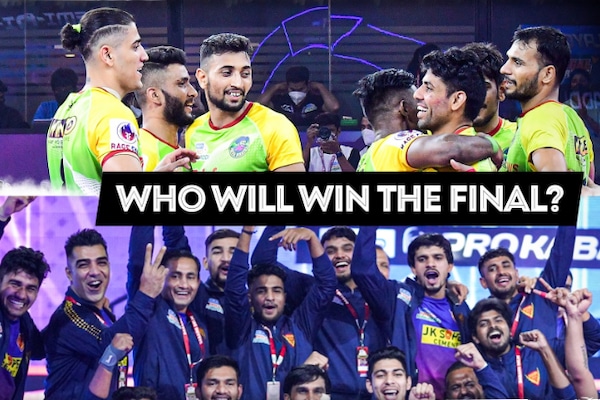 missing out in a heartbreaking fashion.

The Patna Pirates have put together a historic campaign. They finished the league stage with 86 points, 11 more than second-placed Dabang Delhi, a new PKL record. Their score difference of +120 is the third highest in the league’s history and their tally of 16 wins during the league stage has been bettered by only one team in PKL (Gujarat Giants with 17 in Season 6).

The key to their incredible success this season has been their defence. The Pirates’ defensive unit need just five tackle points to surpass U Mumba’s tally of 289 from Season 6 and break the record for most tackle points in a single season. The onus of leading Patna’s incredible defence will be on Left Corner Mohammadreza Chiyaneh. The rookie set a new PKL record with his 10th High 5 in the Pirates’ semi-final win over U.P. Yoddha, surpassing the previous mark set by Surender Nada and Surjeet Singh in Season 5. An 11th will likely lead the Pirates to an unprecedented fourth PKL title.

Standing in Patna’s way are the only team to do the double over them this season.

Dabang Delhi beat the Pirates twice in Season 8 and held them to under 30 points in both matches. While they were stellar in both games against the Pirates, they had an up-and-down campaign overall. The defence and Naveen Kumar’s injury hindered them this season, but they managed to overcome both issues and booked their berth in the playoffs with two games to spare.

In the semi-final against the Bulls, Delhi’s defence had one of their best outings of the season, as they picked up 11 tackle points. Naveen, after underwhelming outings in his final three league stage appearances, scored 14 points to guide his team to victory. Delhi has the psychological edge over Patna, but they will have to bring their A-game to usurp them in the final. Delhi are 40 minutes away from their maiden PKL title, but they will have their task cut out to go one better than they did in Season 7.

Where will the PKL final between Patna Pirates and Dabang Delhi be played?

The PKL 2022 final between Patna Pirates and Dabang Delhi will be played at Sheraton Grand Bengaluru Whitefield on February 25.

What time will the PKL final between Patna Pirates and Dabang Delhi start?

The final match of the Pro Kabaddi League between Patna Pirates vs Dabang Delhi begins at 08:30 PM IST.