Right now, Koo has numerous personalities that include ministers, singers, athletes and actors, as well as public information handles of central government ministries.

Athens Olympics silver medalist and former union minister Rajyavardhan Singh Rathore on Wednesday became the latest celebrity to join the made-in-India ‘Koo’ app. Rathore joined Koo, India’s purported answer to Twitter after he was urged to ‘shoot’ his opinions on the platform.

Responding to the app, the Commonwealth Games gold medalist asked his followers if he should switch to Koo, the winner of Atmanirbhar Bharat award. He later posted a screenshot of his first post. His first Koo post showed him holding the national flag with the caption reading, “My 1st post on a ‘Made In India’ app would be incomplete without the Indian flag.”

Sending across a message of ‘nation first’, he tweeted that if India comes first in our hearts, then why not the apps made in India. The former Union information and broadcasting minister also asked his followers to follow him on Koo and shared his profile link. 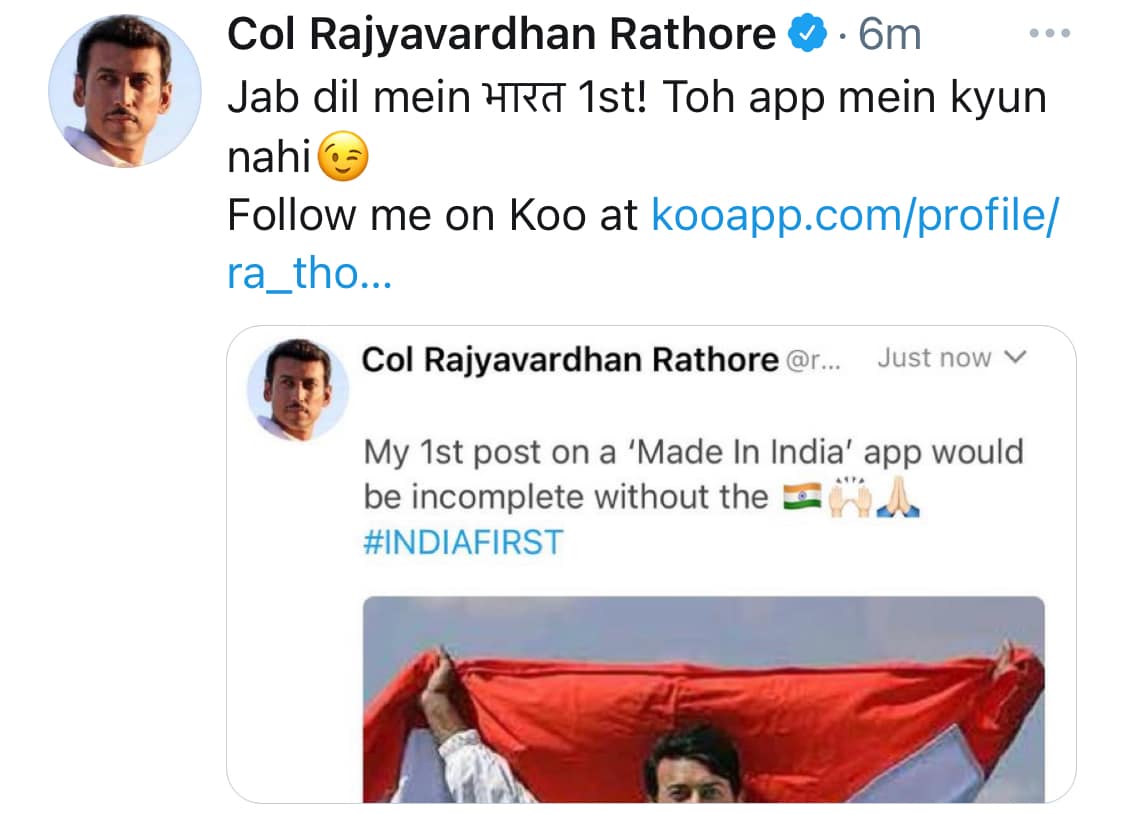 Koo co-founder Mayank Bidawatka told News18 in an interview that the app has crossed over 3 million downloads, growing 4x in the past six months, and expects the growth to be considerably more exponential from now onward.

Alongside these personalities, Koo now has official, verified accounts of the likes of the Ministry of Electronics and Information Technology (MeitY), MyGov, India Post, National Informatics Centre and so on. With an increasing list of verified profiles, who are noted in their fields and hence being influential, it will be interesting to see if Koo does manage to gain footing in a nation where Twitter has so far been among the biggest social networks in use.

THING TO KNOW ABOUT KOO

Koo was co-founded by Aprameya Radhakrishna and Mayank Bidwatka in 2020. It is owned by the parent company Bombinate Technologies Pvt Ltd which also operated Vokal, the desi version of the QnA app Quora. Radhakrishna, an Indian Institute of Management, Ahmedabad, graduate, is also the CEO. The company has several investors including former Infosys CFO TV Mohandas Pai’s 3one4 Capital which joined the list of investors earlier this month, The Indian Express reported.