Home» News» Sports» So Many Injuries at Wimbledon? Centre Court's Been Slippery When Wet, Even with Roof Closed
3-MIN READ

So Many Injuries at Wimbledon? Centre Court's Been Slippery When Wet, Even with Roof Closed

Novak Djokovic, Adrian Mannarino and Serena Williams have slipped so far in the Centre Court at Wimbledon even though the matches were played with the arena's retractable roof shut because of rain.

Novak Djokovic landed on his backside twice early in the first match played on Centre Court at Wimbledon this week. He was no worse for the wear.

Roger Federer’s opponent on Day 2, Adrian Mannarino, lost his footing in the main stadium, too, but he was not so lucky: The Frenchman’s 33rd birthday ended with a twisted knee and a loss, because he was too hurt to keep playing.

That also happened to Serena Williams in the very next match Tuesday, and her latest bid for a record-tying 24th Grand Slam title ended with her “heartbroken” and in tears after just 30 minutes and less than a set. She injured her right leg when her left shoe lost traction behind the baseline in almost the exact same spot Mannarino went down.

All of those contests were played with the arena’s retractable roof shut because of rain. And that — rather any sort of change to the grass itself as the oldest Grand Slam tournament returns after being canceled a year ago, early in the pandemic — is what the All England Club blames for how slippery the surface has been during what it says were the wettest two opening days of Wimbledon “in almost a decade.”

Keeping the roof closed for a long period leads to “additional moisture” on the grass, the club said in a statement released after Williams and Mannarino got hurt and exited the singles brackets. “It feels a tad more slippery, maybe, under the roof. I don’t know if it’s just a gut feeling. You do have to move very, very carefully out there. If you push too hard in the wrong moments, you do go down,” said Federer, an eight-time Wimbledon champion. “I do feel it’s drier during the day. With the wind and all that stuff, it takes the (moisture) out of the grass. But this is obviously terrible.”

In what sounded like an attempt to dispel the notion that anything might be different about the grass this time, particularly given that it’s been two years since the tournament was held, the club’s statement said: “The preparation of the grass courts has been to exactly the same meticulous standard as in previous years.”

Here is a key element in the equation: Wimbledon’s courts are removed annually and new grass is installed.

So the fact that there wasn’t a tournament in 2020 shouldn’t be affecting things.

“Even though we didn’t have The Championships, our renovation program was the same,” Neil Stubley, the club’s head of courts and horticulture, said before competition began Monday. “So we literally just ripped the courts up and sort of re-leveled, re-seeded and then just grew them back in for this year. Which we would have done exactly the same, whether we’d had The Championships or not.” 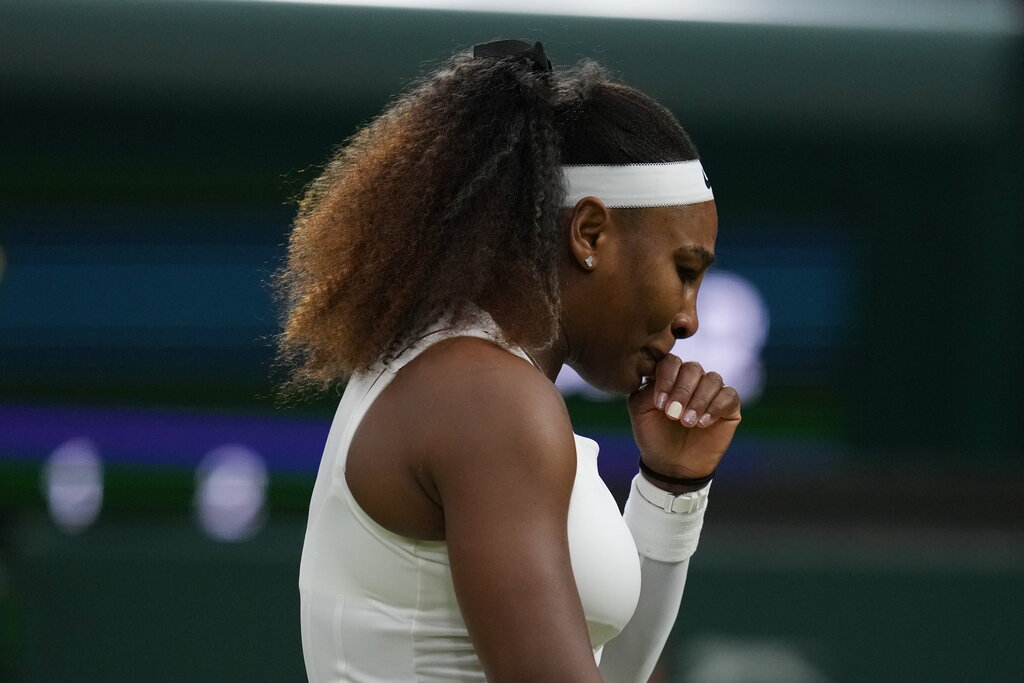 The outset of the two-week tournament is “a time when the grass plant is at its most lush and green, which does result in additional moisture on what is a natural surface,” the club said in its statement, adding: “With each match that is played, the courts will continue to firm up.”

He’s rather familiar with the place, having first entered Wimbledon in 1999 and first won it in 2003.

“I feel, for a lot of players, it’s super key to get through those first two rounds, because the grass is more slippery. It is more soft,” he said. “As the tournament progresses, usually it gets harder and easier to move on.”