News18» News»Sports»Table Tennis Under Lockdown: Have to Learn to Adapt and Live With Covid-19, Says Soumyajit Ghosh
5-MIN READ

Table Tennis Under Lockdown: Have to Learn to Adapt and Live With Covid-19, Says Soumyajit Ghosh

Soumyajit Ghosh said the table tennis industry could not be under lockdown indefinitely and they will all have to get used to the new way of living and playing.

Olympian and Arjuna awardee table tennis player Soumyajit Ghosh said he has been through "extremely bad times" in the last couple of years and hence, to stay positive in the grim times of coronavirus was not very difficult for him.

Ghosh preached that it's all about using the lockdown in a positive manner, staying mentally fit and learning how to live with the virus since it is not going anywhere.

Ghosh has been on and off the court since March 2018, when a woman filed a rape FIR against him. He was suspended by the Table Tennis Federation of India (TTFI) then but in August 2018, he married that woman. His suspension was revoked in December 2019 and he was back to practice in January, 2019. In the same month, his wife Tulika Dutta filed another case against him and his family members and they have been living separately since. Ghosh, however, said he had been practicing regularly since the start of last year till the lockdown put a stop to it.

"It is always tough since I have to start over due to the long break coronavirus has forced us all into but we have to adjust. Currently I feel if there is no emergency, one shouldn't travel and practice in his/her own safe place.

"However, everything will open up and then, nobody can stop anything. If you say you won't get back to work, you won't get anything to eat. You have to continue to run the show," Ghosh said in a conversation with News18.com.

Ghosh elaborated that the face of the sporting world is going to change with social distancing becoming a prominent feature. He admitted that it was going to feel weird but enunciated his point with the phrase "idhar khai udhar kuan (it's a ditch this side and a well on the other)."

The 27-year-old said he was still not comfortable with the idea of returning to practice and had conveyed the same to TTFI after lockdown 4.0 gave way to the opening of stadiums and complexes.

"I'm waiting for the ITTF (International Table Tennis Federation) schedule. They have a meeting in June so we have to wait and see. International travel is also still an issue, at least till August so let's see how everything is going to work out," he said.

He stressed that the scary part about coronavirus is the number of deaths it has caused. "If there is a guarantee that no one will die even after catching coronavirus, no one will be scared. It will be like fever or cough and cold. But currently, you never know what will happen if you get it and even the vaccine is going to take time." 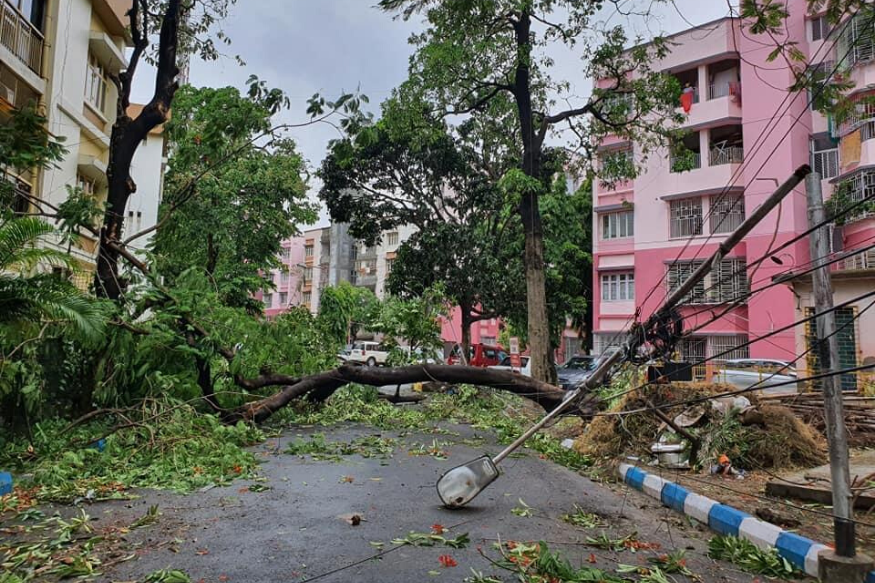 Ghosh lives in Kolkata near the Jadavpur area in Kolkata and had to deal with the devastation that Cyclone Amphan unleashed on the city and other parts of the state on May 21. It had reportedly killed 98 people till Friday.

Meteorological Department describe the cyclone as an "extremely intense" one with wind speeds of up to 195km/h to 121mph.

Ghosh said that only one tree near him fell due to the cyclone but his house remained largely unaffected. The one major issue he had to face was staying without electricity.

"For six days, we had no electricity and water," Ghosh described. He said he first borrowed water from his neighbourhood before his apartment hired a generator to enable a decent supply of water.

"We had to deal with both the temperature and mosquitoes. Whenever we opened the windows, a whole of mosquitoes would come in and if not, then the house will be extremely hot.

"My mother and I slept in the tent on our terrace after applying mosquito repellants."

Last week, News18.com had interviewed Sanil Shetty who had stated that players' performance would suffer due to a no-fan show in the coming months. Ghosh had a completely opposite view.

Ghosh said even if there are no fans, it would hardly matter as players are focussed on the game when they are standing across the table.

"If there are people, it's good but when you're playing, you're focussed on the game and you don't see anybody else. At the end of the day, people are still going to watch on television or online, so it hardly matters," Ghosh opined.

He further said that of course a full stadium is an enjoyable feeling and without fans, it will be different but not difficult. "It is for our own benefit since there is nowhere to escape from this coronavirus."

Ghosh said he had only begun playing again last year and had been unable to play a lot of international tournament to improve his ranking. He said he must be on the sixth or seventh spot within India and with only two qualifying for men's singles for Tokyo Olympics, he had no high hopes for Olympics anyway.

However, he said he was getting into a rhythm playing tournaments nationally last year and had played almost all of the Top 20 in the country and had even defeated most.

He mentioned that for people preparing for doubles in Olympics, things might look different.

Sanil told News18.com that ITTF had said there would be no doubles this year but Ghosh said he didn't know of any such development as he hadn't followed much.

He opined that if players are allowed to play singles, it hardly mattered if doubles was being played as well.

"It won't matter if you play doubles because you're tested anyway. If you aren't well, you can't play obviously so I don't see how rules will be different for doubles.

"However, doubles is still not as important in table tennis as badminton and tennis even though they are a part of Olympics. Even in India, nobody trains for doubles specifically. If you are good in singles, you play doubles as well."

Ghosh said he has been communicating with his family and friends as the country fights the coronavirus crisis. He shared that he stays in regular touch with Harmeet Desai, Anthony Amalraj and Sanil while Achanta Sharath Kamal and Sathiyan Gnanasekaran called him to wish on his birthday, which was on May 10.