Wimbledon Tennis 2021 live score and Updates: Andy Murray wins on Wimbledon return as he beats Nikoloz Basilashvili 6-4, 6-3, 5-7, 6-3 to advance to the second round. Iga Swiatek beat Hsieh Su-wei to win her first match at Wimbledon. Stefanos Tsitsipas was knocked out of the tournament in the first round with a straight sets loss to American Frances Tiafoe. Novak Djokovic began his bid for a sixth Wimbledon title and 20th Grand Slam losing the first set 4-6 but regained composure and slipped several times on the grass but hit 25 aces and rallied to win 4-6, 6-1, 6-2, 6-2 against wild card Jack Draper. The grass court showpiece returns following its cancellation in 2020 due to the Covid-19 pandemic.

Day 1 saw Andy Murray, Novak Djokovic, Stefanos Tsitsipas and Andrey Rublev the big names in action. While Murray, Djokovic and Rublev won their Round 1 matches, Tsitsipas lost to Frances Tiafoe causing a huge upset on the first day itself.

Among the women, Swiatek, Kenin, Muguruza and Sabalenka all won their matches. Sloane Stephens knocked out 10th seed Petra Kvitova.

Andy Murray wins on Wimbledon return as he beats Nikoloz Basilashvili 6-4, 6-3, 5-7, 6-3 to advance to the second round.

Andy Murray fought back hard in that third set but lost it 5-7 to Nikoloz Basilashvili. Does he have the legs to win this one now?

Andy Murray was 5-0 down in the third set after winning the first two. He got back to 5-5 and is now serving 5-6 down.

Andy Murray is just a set away from the second round. He takes the second set 6-3 against Nikoloz Basilashvili.

As Murray returns to the Centre Court at Wimbledon, he goes about his business like ever by taking the first set 6-4 over Nikloloz Basilashvili.

Here is how the play is lined up at Centre Court and Court 1 on Day 2 of Wimbledon 2021.

Here is one of Frances Tiafoe's many great shots during his win over Tsitsipas.

One of the many magnificent shots produced by @FTiafoe 👏#Wimbledon pic.twitter.com/OjNWXJ96Sh

Iga Swiatek faced no real trouble as she beats Hsieh Su-wei 6-4, 6-4 to advance to the second round of Wimbledon 2021.

Rublev is two sets up against Delbonis.

Khachanov is serving for a two-set lead.

Andy Murray has taken the centre court of Wimbledon and is up against 24th seed Nikoloz Basilashvili.

Sofia Kenin eases past Wang Xinyu 6-4, 6-2 into the second round of Wimbledon.

Former US Open champion Sloane Stephens beats 10th seed and two-time Wimbledon champion Petra Kvitova 6-3, 6-4 to advance to the second round of Wimbledon 2021.

First upset of Wimbledon 2021 comes on the first day of the tournament! Third seed Stefanos Tsitsipas was knocked out of the tournament with a 4-6, 4-6, 3-6 loss to American Frances Tiafoe. Tsitsipas wasn't in his elements at all as Tiafoe easily broke him in all the three sets to win the match.

The biggest win of his career 🙌

11th seed Garbine Muguruza crushes Fiona Ferro 6-0, 6-1 to storm into the second round of the tournament.

In another match, Lauren Davis smokes out Jodie Anna Burrage 6-2, 6-1.

Through in 49 minutes 💨@GarbiMuguruza eases through to the second round with a 6-0, 6-1 victory against Fiona Ferro#Wimbledon pic.twitter.com/hY7zOo2EpS

Big upset on the cards on Day 1 of Wimbledon? Third seed Stefanos Tsitsipas is two sets down against American Frances Tiafoe after losing the second set 6-4.

Two sets up against the No.3 seed 👏

Here are the matches that are going on right now: (Updated)

Start as you mean to go on…@DjokerNole’s pursuit of a third consecutive Wimbledon title is off to a winning start, beating Jack Draper 4-6, 6-1, 6-2, 6-2#Wimbledon pic.twitter.com/soTVGWBze4

Sixteen of the scheduled 64 first round matches at Wimbledon were cancelled on Monday as the tournament's return after two years suffered a soggy start.

Play on the All England Club's outside courts had been due to get under way at 11:00 am local time.

However, that start time was constantly revised with 3:30 pm the latest start time set by organisers. 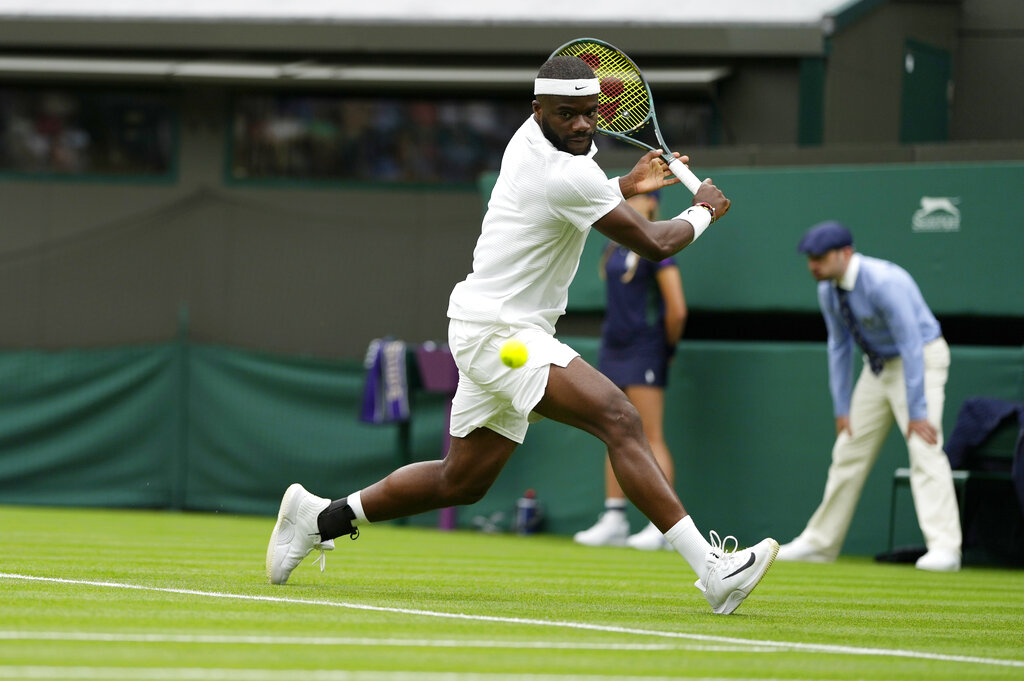 He is in the zone now! Novak Djokovic wraps up the third set 6-2, with a 46-second last point that too with 4 aces! 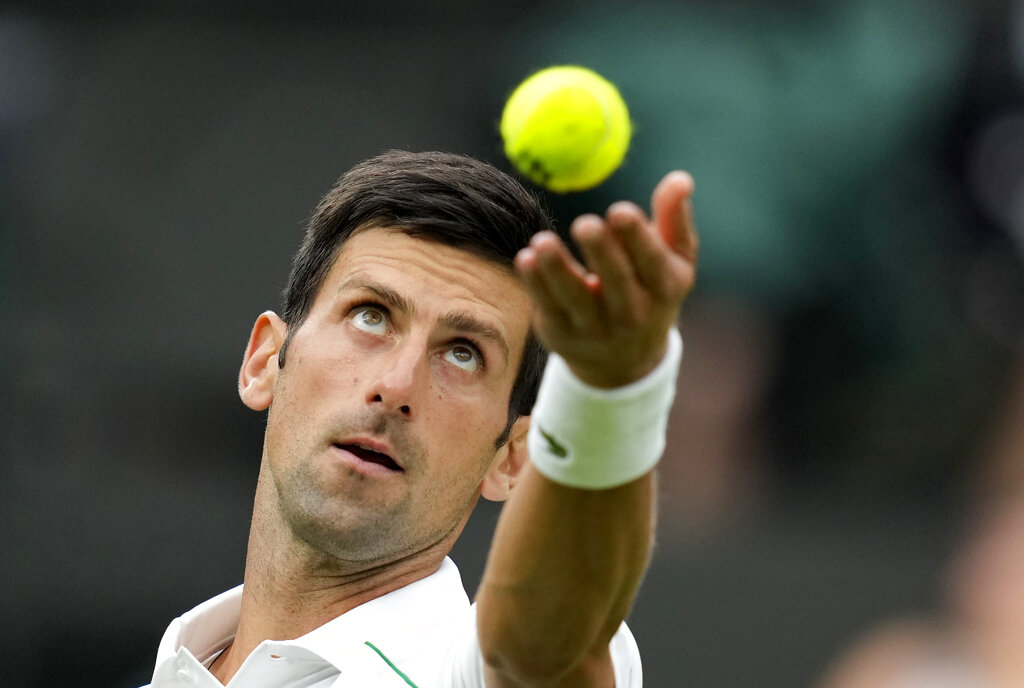 Novak Djokovic bags the second set comfortably against Jack Draper 6-1... looks like the defending champions is back to his best after a blip in the opening set! 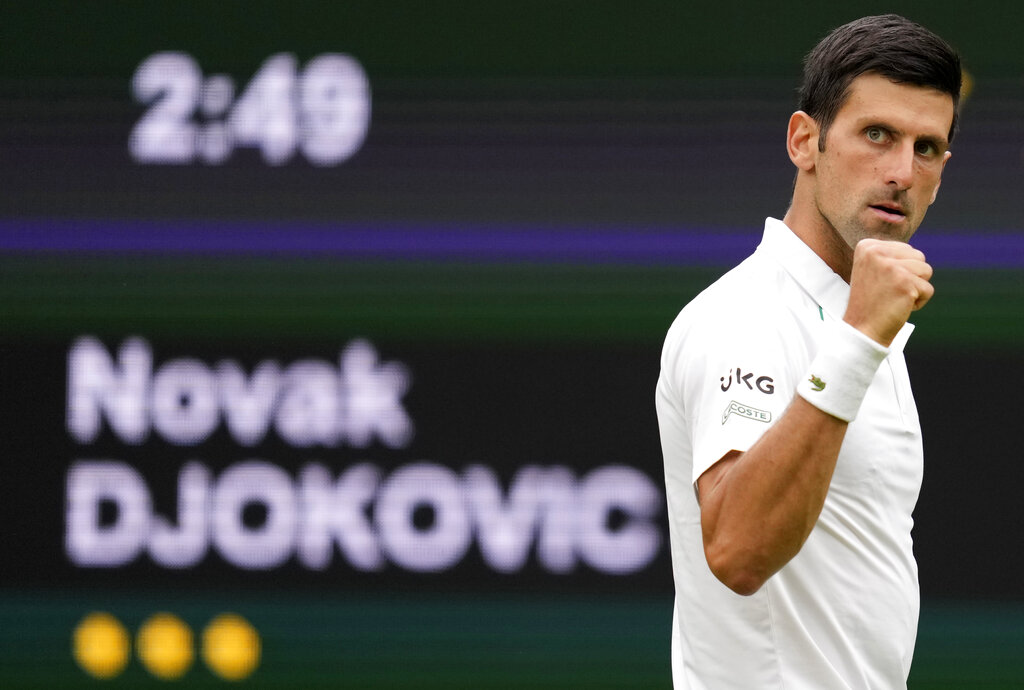 First win of The Championships 2021 belongs to @SabalenkaA ✅

Is an upset on the cards? 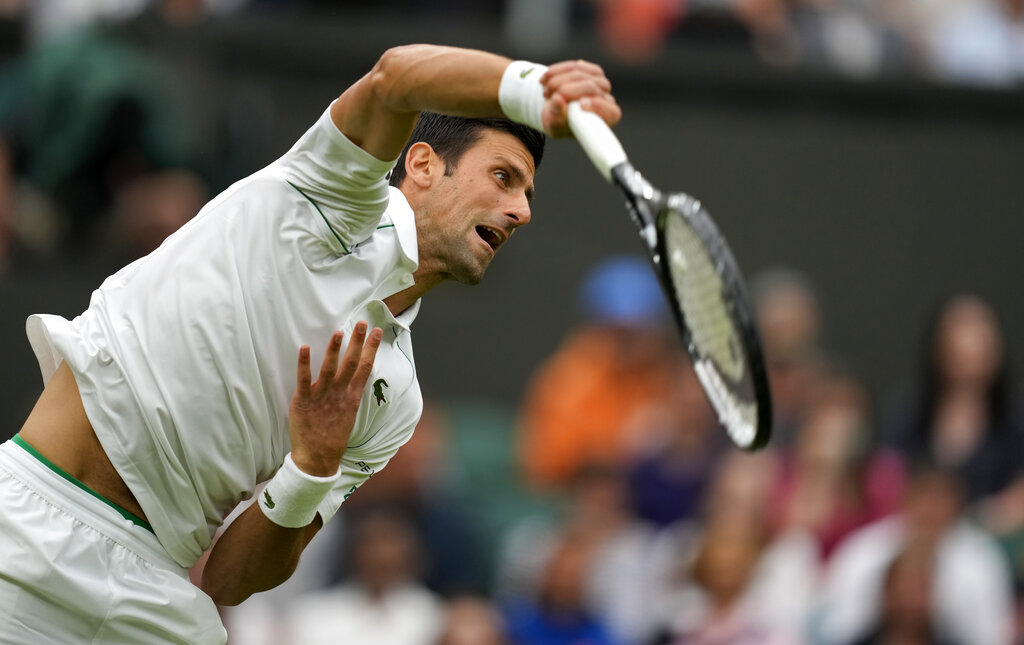 Representatives of those who have worked on developing vaccines are in the royal box, as well as NHS workers, received a standing ovation from the fans in the stands.

An opening day on Centre Court with a difference...

A special moment as we say thank you to those who have played such an important role in the response to COVID-19#Wimbledon pic.twitter.com/16dW1kQ2nr

Armed with a Smile and On a Mission!

Novak Djokovic was greeted on his return to Wimbledon by a standing ovation with the Centre Court crowd limited to 50% capacity because of the coronavirus pandemic.

Djokovic won the tournament the last time it was held, in 2019, beating Roger Federer in an epic final. He is halfway to a Grand Slam in 2021, having won the Australian Open and the French Open.

The No. 1-ranked Djokovic smiled as he entered the stadium. The retractable roof was closed because of rain that delayed the start of play on outer courts. Djokovic’s opponent is British wild card Jack Draper.

Djokovic has won seven of the past 12 major tournaments. We've waited a while for this...@SabalenkaA and Monica Niculescu are out on No.1 Court to begin today's action 🙌#Wimbledon pic.twitter.com/uY1btV2NLL

17:35 (IST)
It's Back! Just Like Old Times as Rain Delays Start of Wimbledon Murky skies and rain welcomed back Wimbledon, which was cancelled last year for the first time since World War II because of the coronavirus pandemic.

When does WIMBLEDON 2021 start and what is the schedule?

The qualifiers of Wimbledon started on 22 June with the tournament proper beginning 28 June. The women’s singles final is scheduled to be played on July 10, with the men’s singles final to take place the following day on July 11 at the All England Lawn Tennis and Croquet Club.

Where to watch WIMBLEDON 2021 on TV and LIVE STREAMING Online in India?

There is cool, wet weather expected for much of Week 1, with plenty of rain in the forecast and daily high temperatures in the low 60s to low 70s Fahrenheit (teens to low 20s Celsius).

Crowds can be at about 50% of full capacity at the start of the tournament because of the pandemic, but will be allowed to rise to 100% at Centre Court about 15,000 people for the two singles finals.

Djokovic became the first man in 71 years to win Wimbledon after erasing championship points, edging Roger Federer 7-6 (5), 1-6, 7-6 (4), 4-6, 13-12 (3). It was the first fifth-set tiebreaker in a final at the All England Club. Federer twice was one point from winning while ahead 8-7 in that set. Djokovic collected his fifth Wimbledon title and second in a row, raising his Grand Slam haul to 16 trophies. He currently stands at 19, just one away from tying the men’s record shared by Federer and Rafael Nadal. Halep played what she has described as a perfect match to upset Serena Williams 6-2, 6-2 in less than an hour in the women’s final. Halep made only three unforced errors, 23 fewer than Williams. That victory gave Halep her second Grand Slam title. She will not be back to defend that championship, though, because a torn calf muscle forced her to withdraw from this year’s tournament.

7 Wimbledon singles championships won by Serena Williams, part of her Grand Slam total of 23, the most in the Open era, which began in 1968. The only player with more is Margaret Court, who won 24 across the sports amateur and professional eras.

Djokovic will get his bid for a third major title of 2021 started at Centre Court on Monday by facing wild-card entry Jack Draper, a 19-year-old left-hander from England who is making his Grand Slam debut. That will be followed in the main stadium by a showdown between a pair of major champions: two-time Wimbledon winner Petra Kvitova vs. 2017 U.S. Open champ Sloane Stephens. When she heard about who she’d be playing, Kvitova said, I was like, OK, its not easy, but thats how it is. The third Centre Court match on Day 1 features the return of Andy Murray, whose 2013 title at the All England Club was the first in singles for a British man in 77 years. Murray hasn’t competed in singles at Wimbledon since 2017, because of two hip operations. Among the other owners of Grand Slam trophies on Monday’s schedule: Venus Williams, Garbie Muguruza, Iga Swiatek, Sofia Kenin and major runners-up Stefanos Tsitsipas and Kevin Anderson.