The top-seeded Barty adds this championship to the one she won at the French Open in 2019.

She is the first Australian woman to win the singles trophy at the All England Club since Evonne Goolagong in 1980. Barty says she has been inspired by Goolagong and wore an outfit at Wimbledon that was a tribute to the dress Goolagong played in when she won the tournament for the first time in 1971.

What a shot! Pliskova is not giving up the chase as hits a backhand volley to go 15-0 up.  Barty replies with a smash and it is 15-15. Pliskova hits another backhand volley and is 30-15 up. She then double faults and Barty has a chance to win it now... but Pliskova makes it 40-30with a beautiful backhand volley. She holds serve with an ace!

What a final this has been!

Barty messes up on a backhand and Pliskova is 0-15 up. The World No. 1 makes it up with a smash and it is 15-15. After a long rally, Barty takes a 30-15 lead as Pliskova hits long on her forehand. She makes up with a perfectly executed forehand winner. Barty surges ahead as Pliskova makes another unforced error and she holds serve in a similar fashion again.

Pliskova is 0-15 up with a forehand volley and hits another forehand winner to be 30-0 up. Barty hits an backhand unfirced error. Barty gets a poit with aforehand volley of her own but Pliskova holds serve with  smash.

Pliskova is not giving in that easily and aided by some unforced errors from Barty takes the point at love.

Barty races to a 3-0 lead as Pliskova is losing the plot again and looks nervy. She is making more unforced errors.

Pliskova looked more settled in the second set although she gifted Barty a break for 6-5 after leading 40-0 in that game. But Barty then faltered when trying to serve out the match, missing three forehands.

Pliskova took a 6-2 lead in the tiebreaker and clinched it when Barty double-faulted. Not that easily! Pliskova takes the second set to a tie-breaker!

Pliskova gets on a service run and is up 40-0. Fifth ace of the set from the Czech! Barty gets an incredible point as Pliskova is a bit relaxed at the net. Barty hits back with a forerhand winner, foxing Pliskova as she then hits long and it is deuce. Pliskova growing flustrated as she hits a cross court forehand wide. Barty tkaes the point from being 40-0 down!

Pliskova hits long after a nice rally. Barty double faults as Pliskova hits the net and she does it again as Barty is 40-15 up. She wraps up with an ace.

Pliskova holds serve even though hecklers disturbed the players through out the point...

Mission Impossible for Pliskov no more!

A set down, it isn't mission impossible from here to win for Karolina Pliskova#Wimbledon | @TomCruise pic.twitter.com/0HoYtt3kud

Barty gets a challenge right on a shot called long and leads 15-0. On the next point, a similar shot and it is called in as Pliskova challenges and it is still in. 30-0. Some beautiful slices from Barty and then Pliskova hits the net. All square again.

Pliskova is pumped up now! She is aided by some unforced errors from Barty as she is 30-0 up. She makes it 40-0 with an ace. Some heckling from the crowd and Barty gets back to make it 40-15. Pliskova though wraps it up and takes the point.

Barty starts with a double fault and goes behind 0-30 as she hits a return long. Pliskova gets three break-back points as Barty suddenly seems to have lost her rhythm.

Pliskova starys well with Barty hitting her return long. Again and Pliskova is 30-0 up. Barty makes it 30-15 with a thundering cross-court forehand. Pliskova tried to be cute but ended up hitting it long. She makes up with an ace and got the point with another ace.

Barty has her game face on and she races to a 30-15 lead only for her to hit a double fault. She makes up with an ace and wraps up with another.

Pliskova is down 0-30 as she messes up her serves. Uncalled double faults there. She was serving so well and suddenly she isn't?! Barty races to a 30-0 lead and breaks as Pliskova hits the net.

Anyhthing you can do... Barty starts with an ace! Pliskova hits one long Barty is 30-0 up. Another unforced error and Barty is 40- up. She also holds serve with an ace. 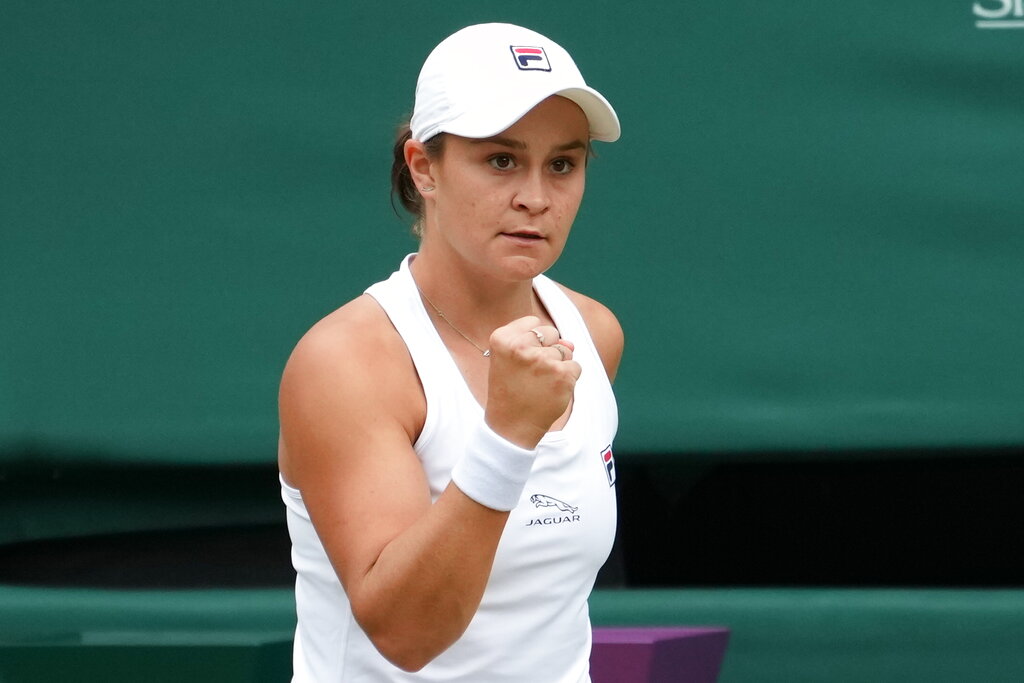 Pliskova hits the net but Barty gets to it and hitsa superb return. Pliskova smashes an ace and is level. Barty hits the net and Pliskova is serving up fireballs now. She finally holds serve.

Barty is hitting some delicious slices as Pliskova is trying to power her way back but the World No.1 is in her element. After going behind, she fights back only to hit a service double fault and go 15-30 down. Some pinpoint winners from Pliskova and then a beautiful first-time return... she breaks again.

A shot from Barty hits the net and stands up but Pliskova can't make the return correctly and is 0-15 down. Barty miss-hits and it is 15-15. A powerful serve and it is 30-15. Barty smashes a lift from Pliskova and makes it 30-30. Pliskova is getting late on her serves and hits a rather simple-looking backhand into the net. Barty gets another break.

Pliskova gets a lucky break as Barty makes a few unforced errors and is 0-30. Another backhand hit long means she is 0-40 down. Pliskova breaks back and sigh relief.

Barty looks comfortable as she races to a 30-0 lead with some precise serves. Pliskova is not helping herself with some poor unforced errors. Barty wraps ups the game with another ace.

Barty, who is 25, was the junior champion at Wimbledon a decade ago, then left the tennis tour for nearly two years in 2014 because of burnout. She played professional cricket back home, then eventually decided to return to her other sport.

She was at her best at the beginning of each set against the eighth-seeded Pliskova, a 29-year-old from the Czech Republic with a big serve.

Barty’s most significant wobble came late in the second set. She served for the victory ahead 6-5 but sailed consecutive forehands long to get broken, then was shaky in the ensuing tiebreaker, which she ceded with a double-fault.

In the third, though, Barty went up an early break, led 3-0 and stayed the course in the first Wimbledon women’s final to go three sets since 2012. It also was the first since 1977 between two participants who never had been that far at the All England Club.

Neither Barty nor Pliskova made it past the fourth round at the grass-court major until this fortnight.