Home » News » Sports » WWE INTERVIEW: From not Knocking on the Door Enough to Breaking it Down – The Engrossing Drake Maverick Story
8-MIN READ

WWE INTERVIEW: From not Knocking on the Door Enough to Breaking it Down – The Engrossing Drake Maverick Story

In a one-on-one conversation with News18 Sports, James Michael Curtin aka Drake Maverick looks back at his WWE career so far, talks about his favourite role, his credentials as pro-wrestler, and how he still has a lot to show and prove to the WWE Universe.

Vineet Ramakrishnan
Drake Maverick has had a roller-coaster ride in the WWE so far. From coming into the company as the face of 205 Live in non-wrestling capacity to elevating the popularity of 24/7 Champion; From being released in the middle of the pandemic to being one of the leading contenders for the WWE NXT Cruiserweight Championship. When life gives you lemons, make lemonade and Maverick did exactly that to turn around his WWE career path. Making full use of the power of social media, Maverick first gave the audience amazingly entertaining segments with 24/7 title and then an emotionally stirring narrative to reclaim his WWE contract. In a one-on-one conversation with News18 Sports, James Michael Curtin aka Drake Maverick looks back at his WWE career so far, talks about his favourite role, his credentials as pro-wrestler, and how he still has a lot to show and prove to the WWE Universe.

You have been doing this for nearly four months now without fans due to the pandemic. How difficult has it been for you as a performer personally and for others? How are you coming to terms with the new scenario?

For somebody who grew up in the independents and worked for small crowds in the United Kingdom, if you told me I’d be in front of the same amount of people or absolutely no people for WWE – I would say you would be kidding.

But, I think your journey prepares for any situation, especially in our industry because you never know what is going to happen next. So this situation was very easily adaptable for a lot of us, who have experienced wrestling in front of minimal people - in fairgrounds, church halls and whatnot.

I understand it can look difficult, but it really does draw you in. It got a point where I was actually really preferring to wrestle in front of no people because of the physicality. You can hear all the physicality that goes on and a lot of people when they see live on arenas actually don’t hear the impact of our bodies hitting each other, so it is a very interesting time. 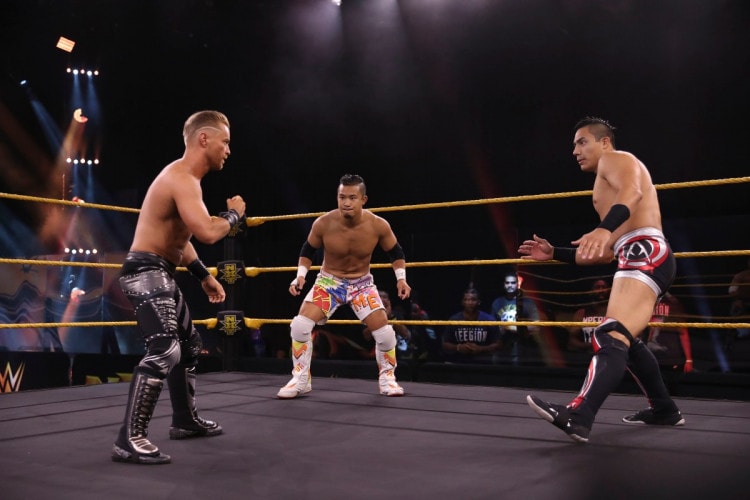 I have looked at other sports, like basketball, UFC, soccer - and it’s been very interesting to see how not only WWE but other sports have adapted as well – it shows the power of the human race, we all adapt. So, it has been very different, you don’t know what’s going to happen one day to the next, but we just adapt and move forward.

With WWE, you started out as General Manager for 205 Live and not as an in-ring competitor and managed the AOP for a while as well. What was the thought process on giving you that role and how did you look at it, considering you were not wrestling much?

I really enjoyed being the GM. And I learned so much from a professional aspect with the team I was dealing with – the head writer of 205 at the time is now one of the head writers on Monday Night RAW - so things I learned from him, prepared me for things going forward. Like what the company expects – how they expect your delivery, what they want your delivery to be, what the cadence of a GM is. This was something I had not done before and I learned so much. I would put in a position where I’d have to watch every match and I’d be biting to get in there because I am not retired, but no one here in WWE had seen me in the ring; so a lot of time it was - from a backstage point - who is this guy?

I know what I am doing, and I practice each week and it was just having that inkling that I wanted to get back into the ring, but that role was one of the most favorite roles that I have ever done, it really was.

The 24/7 Championship gained a lot of traction mainly driven by you and R-Truth and gave the audience one of the most memorable and enjoyable segments this year. You think the storyline ran its course or should have had a much longer run?

We (R-Truth and I) never actually discussed that we were the focal point for it. Truth was given the title at the end of one Monday Night RAW and I just saw this as, ‘listen I have never had any opportunity’ and I am a go-getter, and if I see something I latch on to it and try and create and attach myself to it – without going into business with it, just trying to add to it.

With the title, it was a Hardcore title but in today’s modern social media era which means we all have videos, we all have phones and this can be big. So what I did was, I think that in a car journey on my way home, I pulled over to a McDonalds and started interviewing a man like I was David Attenborough shooting a nature show looking for R-Truth. Then I pulled up to my hotel and I happen to see a woman there and interviewed her and next day, I made some posters searching for Truth and less than 24 hours I already made the 24/7 title a bigger thing.

Not only was it big in the WWE universe, if you look on the phone minutes later, something is happening in the real world, in our world and this could be happening anywhere - I used to go out and hand flyers to fans – I wanted it to be the most interactive experience that people ever had in wrestling and it just grew and grew and grew.

I think we could have done so much more, but one day it creatively stopped – maybe that’s my fault I didn’t not knock on the door. Like, ‘hang on boss, I did a lot of help here’; But these things happen, maybe that was my mistake – I should have just knocked on the door. There is no Road Runner without a Wily Coyote. And with the title, once you take the Coyote out, it was just Road Runner running around and it was not entertaining.

Things took a turn for the worse when you are released, but the subsequent video that you shot changed things around. While it was something happening to you in real life, it was in a way used for storyline and opinions are still divided on this. It definitely made for a compelling viewing. What was your reaction when all of this was playing out and your take on the varied reactions?

When everyone goes on about it is a storyline; oh they have turned it into the storyline well - Guys, it’s my life, it’s not a storyline. And I never questioned creative, I was as I would every week - I get my text on what I am doing and I would show up do my job and go home. It was never any more than that and I did my job as a professional.

Now, I could have handled this very differently and been very upset with being let go or turn up and show my professionalism in spite of what was going on and continue to do a very good job and work hard and show them that, ‘Look at the hard work I was doing and you have made a mistake.’

Also, no one was in a situation I was in. Nobody has three appearances in primetime real estate on NXT, nobody had that but me. So I had to do something and my mindset was that I was going to show them they have made a mistake and the world what I can do; because if WWE was not interested in doing business with me still, someone else would.

That really propelled you as a serious in-ring competitor in WWE in the cruiserweight division and have now worked with likes of best in business around the world like Kushida, Santos Escobar. Does it feel you can hang in there with the best or there more that you have to do competing with them?

Yes Kushida is world-renowned for his work in Japan, Santos Escobar is world-renowned for his work in Mexico and Lucha Underground. But, here’s the thing that everybody forgets – I like to remind everybody that yes they are some of the best cruiserweights in the world; so am I and I always have been. I may have not have been in an in-ring role in WWE much, but I am a former two-time X-Division champion, with another company, that has a lot of linage, such as Samoa Joe, AJ Styles had held the title. 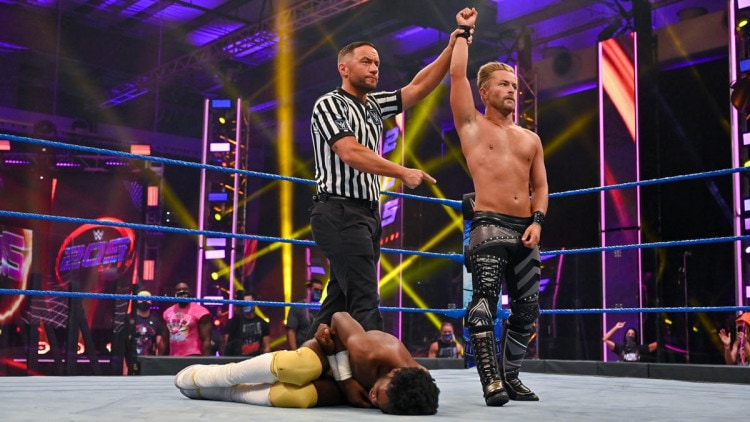 But, you know being in the ring with fantastic talents like that – you create an arc, it is very easy to create with them as well. Everyone is very much undermining me by what they have seen just from an in-ring capacity – but I am a very good professional wrestler and I always have been – now you get the chance to see that.

The cruiserweight Division has had such a great history, but you think – despite having 205 Live – a dedicated cruiserweight show that the division has not been able to assert itself, like let say a women’s division is gaining traction and momentum the way it has. Your thoughts?

(Chuckles) ‘Give cruiserweights a chance’. I think everybody does not remember stars like Cedric Alexander, Mustafa Ali, and countless others have passed through 205 and have gone on to be amazing stars on RAW and Smackdown. I would say 205 is a great place to horn your craft, a great place to learn the ins and outs of wrestling TV and also you get to be seen a lot quicker with the higher-ups in WWE.

When we were on the road we used to be on RAW and then after Smackdown. The people that did Smackdown show were still around to watch 205 Live and the very important eyes be like, ‘hmm, I remember the Premier Athlete Tony Nese, hmm. I remember Ali, I remember Cedric, and maybe something can be done with them here’. You know that connection they develop with the audience, it does rub on the people watching. I would say 205 live has been a success and helped propel many of the guys careers in WWE.

WWE NXT will be telecast live and exclusive in India every Thursday only on SONY TEN 1 and SONY TEN 3 (Hindi) channels from 5.30 am.
Vineet Ramakrishnan