More than half of the respondents from India have a negative attitude towards Made-in-China products or Chinese smartphone brands, the survey said.

The growing anti-China sentiment in India may hurt Chinese smartphone makers hard as a survey on Friday revealed that four in ten respondents said that they will not buy Made-in-China products or smartphones from Chinese brands. Overall, more than half of the respondents from India have a negative attitude towards Made-in-China products or Chinese smartphone brands, according to the Global Consumer Lens study by Counterpoint Research.

In a similar survey conducted by News18.com, about 70.13 percent respondents are of the opinion that they are ready to boycott Chinese goods even if that proves to be extra cost to them. The research called the 'Public Sentimeter on China' also showed that in India, 22.49 percent consumers also want to boycott Chinese goods as much as possible while 6.38 percent consumers have said that ongoing border conflict should not be brought into considering while buying or boycotting Chinese goods or products. 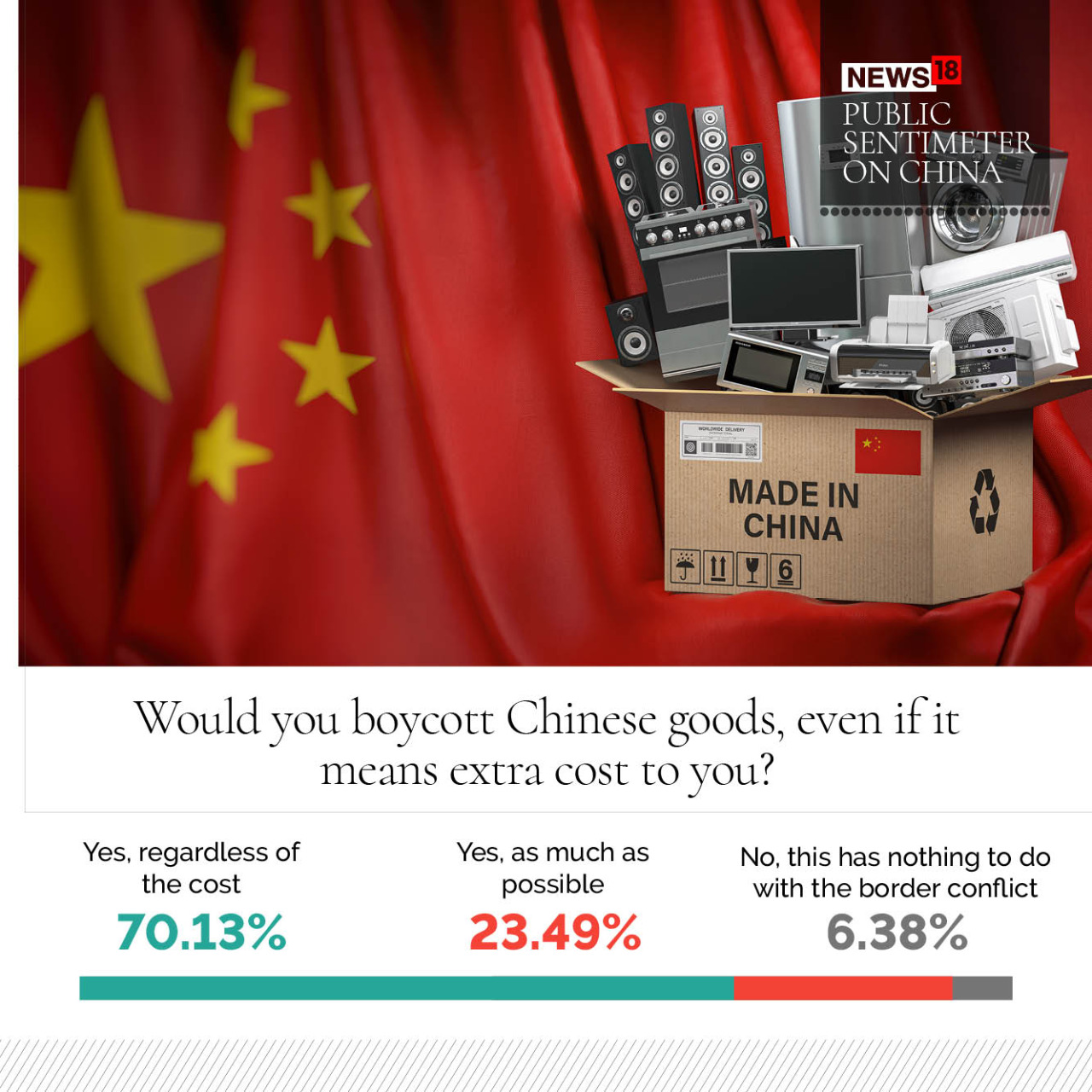 This survey was conducted before the India-China faceoff at Line of Actual Control in the Galwan valley of Ladakh The researchers explored consumer sentiment about smartphones manufactured in China as the Wuhan region was the starting point of the Covid-19 pandemic.

The study was conducted across seven major smartphone markets – the UK, India, France, Germany, Spain, Italy and the US. The anti-China sentiment is highest among Indian consumers, said the study.

The research also revealed that about one-fifth of respondents from the US preferred not to buy Made-in-China products even though in the era of globalisation, it is difficult to label a product as "Chinese" as its components are sourced across different regions. The research showed that in India, 16 per cent Indian consumers want to cut spending by 20 per cent when making their next smartphone purchase. Respondents planning to wait before buying are the highest in India -- 61 per cent.

Similarly, the research by News18.com also showed that 90.72% of smartphone users are also mulling to stop using Chinese apps and social platforms and will be asking their friends and family members to do the same. Interestingly, about 2.35 percent of mobile users have said that they can still use Chinese apps but on the condition that their personal data should not go outside the country while 5.94% of people have said they will continue to use Chinese apps as there are no good alternatives in India yet. However, only 0.99 percent of Indian smartphone users have said that they are not ready to delete popular Chinese video-sharing app, TikTok. The research found similar intentions in Spain and Italy where 58 per cent and 56 per cent of respondents, respectively, planned to wait longer before replacing their smartphones. In the US, the number intending to delay buying was 41 per cent. Germany had the fewest respondents planning to delay purchasing – 34 per cent. Consumers intending to cut their future smartphone purchase budget by 20 per cent or more are highest in Spain (27 per cent) and Italy (25 per cent), followed by the US (24 per cent).

In India, half the respondents are intending to spend between Rs 10,000-Rs 20,000, said the study. The survey which involved over 1,000 respondents from India was conducted across different countries from mid of May to the first week of June.