To get the smartphone, users simply have to make a down payment for the selected smartphone and pay a certain EMI for 12 months.

The Airtel Online Store has started offering various smartphones with down payment and EMI payment option for prepaid users, as well as bundling a lot of data and unlimited calls with one-year validity. This scheme is currently available only on the purchase of an Oppo F9 Pro, Nokia 7 Plus and Nokia 6.1 Android phones. To get the smartphone, users simply have to make a down payment for the selected smartphone and pay a certain EMI for 12 months. The prepaid users who make use of this facility will get 1.4GB of data per day, 100 SMS per day and unlimited voice calling benefits. This means that you get unlimited local, STD and roaming calls for 365 days, as well as a whopping 511GB of 4G/3G data for one year. There are 100 SMS free per day as well, as a part of the package.

We take a look at how the arithmetic works, and how much you need to pay for each phone.

Under the Airtel offer, the Oppo F9 Pro is available on the online store at a down payment of Rs. 3,915 and 12 monthly installments of Rs. 2,099 - put together, this adds up to Rs. 29,103, including a postpaid plan. The company offering 50GB 4G data per month including free roaming, unlimited calls, and a free Airtel TV subscription as benefits for buyers. 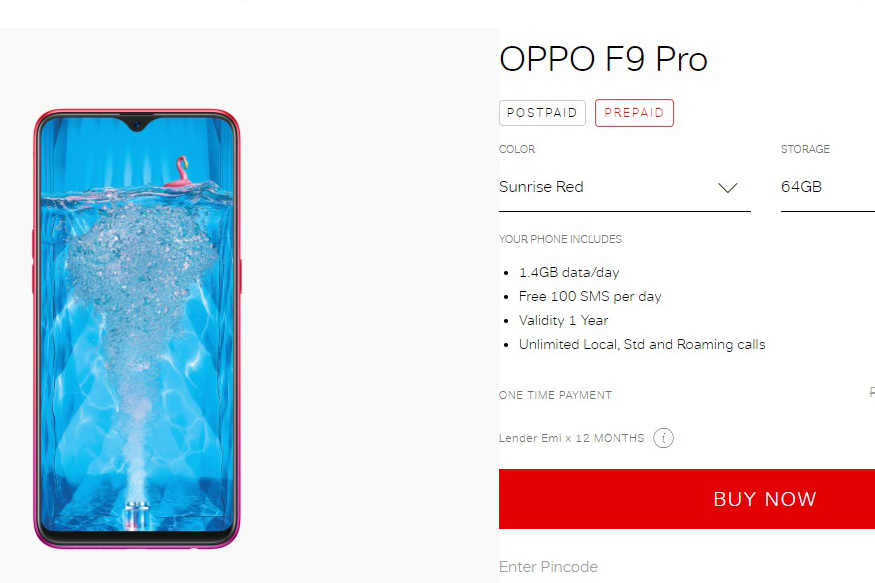 Oppo F9 Pro features a 6.3-inch FHD+ LTPS IPS LCD display panel with 1080×2340 pixels, and 19.5:9 aspect ratio. It is powered by MediaTek Helio P60 SoC with an octa-core CPU and Mali-G72 MP3 GPU. Oppo F9 Pro comes with 6GB RAM and 64GB internal storage where users can also expand the storage with the help of a dedicated microSD card slot.

To buy the Nokia 7 Plus from Airtel Online Store, then a need to pay one-time payment of Rs 7,699. And for the next 12 months, users will have to make a payment of Rs 1,734, which also includes data, voice calling and SMS benefits for a year. Airtel states that the monthly amount should be paid directly to the lender. The Nokia 7 Plus is priced at Rs 25,999 in India and if a user purchases the device from Airtel Online Store, then the final amount of the phone after 12 months becomes Rs 28,507. Airtel will provide 1.4GB data per day, unlimited voice calls without any FUP limit and 100 SMS per day during the monthly EMI period. The Nokia 7 Plus sports a 6-inch 18:9 Full HD+ display and will be available in two colour options: Black/Copper and White/Copper. The smartphone is powered by a Qualcomm Snapdragon 660 SoC and is backed by a 3800 mAh battery. On the optics front, the Nokia 7 plus will come with Zeiss optics in its 12-megapixel wide-angle primary camera and a 13-megapixel secondary camera that delivers 2x optical zoom.

Airtel is offering the 4GB RAM version of Nokia 6.1 for prepaid plans. For the Nokia 6.1, users have to make an upfront payment of Rs 4,599, followed by a monthly EMI of Rs 1,275 every month for 12 months. Here too Airtel will provide 1.4GB data per day, unlimited voice calls without any FUP limit and 100 SMS per day during the monthly EMI period. Earlier, Airtel prepaid users had to migrate to postpaid and get the device under EMI scheme on Airtel Online Store.