Home » News » Tech » Alcatel TKEE Max Review: When Screen Time Is Unavoidable, Why Not Give Your Kid The Right Apps?
7-MIN READ

Alcatel TKEE Max Review: When Screen Time Is Unavoidable, Why Not Give Your Kid The Right Apps?

The Alcatel TKEE Max is a basic Android tablet, but there is that solid added layer of content meant for kids which makes this one of the rare and genuine kids’ tablets.

It is not just a generational change that gives kids these days the factory-loaded ability to navigate an Apple iPad or an iPhone or an Android phone or an Android tablet better than their parents. If you think you can hide their favorite app’s icon in a folder, they’ll find it before you can say bazinga. That’s most certainly how my now 3-year-old daughter has grown up to be, particularly over the past 12 months. Virtual classroom aside, her swipe gestures on an iPad Mini or an iPhone are flawless and precise. She doesn’t go wrong with the destination in mind. Neither do millions of kids of this latest generation. It is a surprise that tablets designed specifically for kids, aren’t as popular as they should be. For virtual classrooms and then educational apps as well as games. Alcatel’s TKEE Max tablet is bucking that trend for parents who need a tablet for home.

I’m still scratching my head. A quick glance through the ecosystem suggests there are a lot of unknown brands making tablets that they say are designed for kids, but none are from known brands. I’d suspect most of these tablets emerge out of containers shipped from China. Wonder why that is, though. Particularly at a time when computing devices are even more relevant for kids of almost every age, with virtual classrooms being the norm., I would have expected more brands to morph this new niche into a strong product line. As a parent, your choices do get limited. Then you’re pretty much scouring for affordable Android tablets, to reduce the possible risk factors too. Perhaps a Lenovo Tab M10 running the Qualcomm Snapdragon 450 processor and a 10.1-inch display for around Rs 13,499 or a Samsung Galaxy Tab A7 with a 10.4-inch display for around Rs 17,999. You’ll find some 8-inch screen options just under the Rs 10,000 price point but that’s where the Alcatel TKEE Max has the advantage. The Alcatel TKEE Max Android tablet is priced around Rs 8,900 depending on deals and cashbacks across shopping websites, and gets you a 10.1-inch screen. 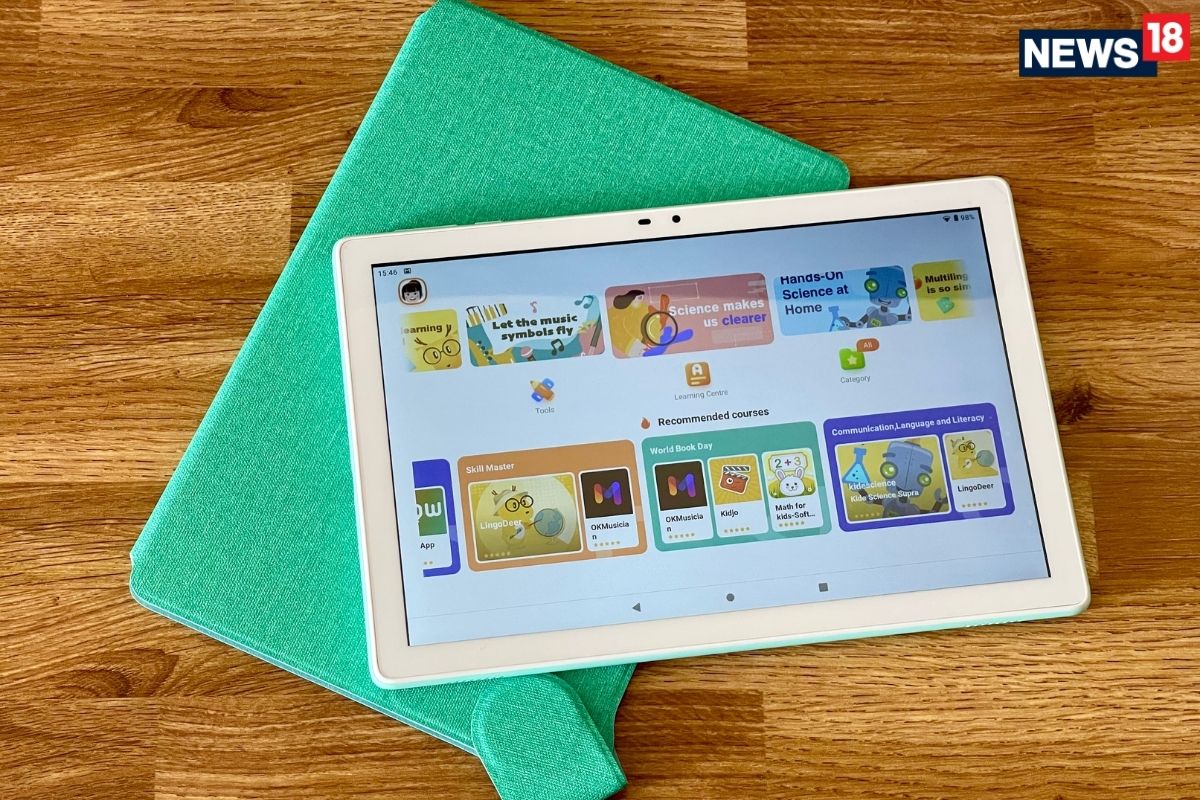 Be absolutely certain that this isn’t a tablet that you should expect to get top notch performance out of, and neither will this really be a gaming tablet. For you, the parents, stay away! Everything is done to be just about right for a child’s tablet usage scenario. This is powered by the MediaTek MTK8167B chip and you’ll get a fair idea of the performance positioning with the 2GB RAM and 32GB internal storage stats on the spec sheet—though there is very much a microSD card slot for up to 128GB more storage. This isn’t the latest Android too, mind you, and Android 10 looks a tad dated now that we’re about to evolve from Android 11 to Android 12, at least in the smartphone world. But if I’m to stop nitpicking here, you can be rest assured that the entire world of Android apps via the Google Play Store is available for you on this tablet. And that’s perhaps what you need for a tablet for kids, to get their educational apps and games ticked off. Performance isn’t the fastest, and you’ll notice some lag when switching between apps. But if your child isn’t already spoilt with the performance of the iPad Mini or a faster Galaxy Tab, this will absolutely not be a problem.

The 10.1-inch display gives the sort of real estate that should allow a fine balance between a compact footprint and comfort while using Microsoft Teams for virtual classrooms. This screen has the 1200 x 800 resolution which is nigh adequate for what the Alcatel TKEE Max tablet has set out to achieve. Its bright, though one could always say that contrast isn’t the best and the blacks aren’t exactly as deep as most tablet users would expect. But then again, the TKEE Max tablet isn’t exactly meant for heavy media consumption or photo editing, and this shortcoming can be ignored. The good brightness levels are a positive. The rather interesting feature of the TKEE Max is the built-in eye care tech, which is multi-pronged in its approach. First is the eye protection mode that cuts down the blue light which should be helpful in case your child is using this at night before it is bedtime. The display colour tones also change a tad according to the ambient lighting. Also, I noticed quite often that the tablet warns in case the user is looking at the screen from too close—and wouldn’t let your child proceed until the bad habit is corrected and the distance between the eyes and the screen is increased. “Too close, stay away from the screen, please!” says the on-screen message. And then the TKEE Max also reminds the kid about taking breaks and getting some off-screen time.

On the face of it, you may feel that this is just any Android tablet. But for the actual magic to begin for your child, you need to set up the Kids Mode that unlocks a whole world of educational apps and games. These are curated categories and genres, including Math, Reading, Science, Art and also recommended courses on themes. At the time of writing this review, one of the recommendations was around the World Book Day. A lot of this content needs to be downloaded, which I feel is a good way to go about things and not preload apps which would have also used up the internal storage space quite a bit. The utility will vary for children, also depending on what other educational tools they may have at their disposal, including school prescribed books and software. But the TKEE’s kids mode content curation along with the plethora of apps available on the Google Play Store, does add a lot of value overall. That being said, I did encounter some bugs which tend to get in the way when using this tablet. There were times when I couldn’t exit the Kids Mode, even though after some effort, I did manage to swipe it to close the app in the task manager. Secondly, after setting up the app, it kept insisting I set up the Kids Mode parent’s email and wouldn’t allow me to proceed. There are times when the tablet stutters more than what the kid or I had bargained for, though those stutters clear up soon enough.

The design of the Alcatel TKEE Max tablet does stand out, and it is not just because of the colour. The colour that we have photographed here is called Cream Mint, and there are nicely rounded edges and a rubberized finish to the plastic. The tablet itself is quite light and quite grippy to hold. The fact that a similar Mint colour cover which doubles up as a stand too adds to the convenience. This cover sticks on the tablet using adhesive, which means you don’t exactly have the luxury of taking this off again and again, and once you do decide to stick this on, make your peace with it. The fabric cover looks and feels really good too, so it shouldn’t really be a regret later. The tablet itself has nicely rounded spines, and the speaker grille is neatly chiseled into. The TKEE Max has a USB-C charging port for the 4080 mAh battery, which does have pretty good stamina from my experience. The Last Word: Does Enough To Get Designated As A Tablet For Kids

The Alcatel TKEE Max is pretty much a basic Android tablet in many ways, but there is that solid added layer of content meant for kids which makes this one of the rare and genuine kids’ tablets. There is absolutely no denying the attractive price tag, which would more than make up for the limited performance. The age group that this content will work for is a pretty wide demographic, between 3 years to 10 years. The reality is that screens and screen time for children cannot be avoided in these times. As parents, we can augment that with the right educational content for the most part, rather than have the little ones whiling away time on YouTube and social media. The fact that the TKEE Max tablet gets you the Play Store wide range of educational apps and games as well as its own content curation, makes it a rather interesting proposition as a first tablet for many kids. Not the fastest tablet at all. In fact, it is not very fast at all and will take its own sweet time loading apps and switching between apps. It is basic and simple, and that is perhaps its charm.