Home » News » Tech » Amazon Echo Plus Review: This is Proof That Refinement is All That is Needed, at Times
6-MIN READ

Amazon Echo Plus Review: This is Proof That Refinement is All That is Needed, at Times

Amazon has used Dolby’s expertise well to tune the sound of the new Echo Plus, and this is a certain upgrade over the model that it succeeds

You enter home after a tiring day at work, and just want to relax for a bit. Not move a muscle. Just flop on the couch and stay there. “Alexa, play Chill Mix playlist from my library,” is all you need to say. The Amazon Echo speaker sitting on your bedside table, will do the rest. That is the power of Alexa, which is Amazon’s artificially intelligent virtual assistant. Much like Siri in Apple iOS devices and the HomePod, the rather bluntly named Assistant in Google’s Android phones and Home speakers as well as Micorsoft’s Cortana. It is not just music that the Echo does. You can get it to set alarms and wake you, answer just about any query you may have, tell you the news and weather, keep you updated on sports scores and more. You can even book an Uber via voice, for instance, without picking up your phone or opening the Uber app. If ever one needed a perfect example of hardware and software working together in perfect synchronicity, this is it.

Amazon’s Echo speakers are generating quite a bit of interest among potential consumers. Be it on the shop floor at electronics’ stores, where people shoe genuine excitement at how artificially intelligent speakers work or be it online where these fly off the virtual shelves. In Amazon’s rather wide line-up of Echo devices in India, the Echo Plus is the torchbearer as far as the top-of-the-line audio hardware is concerned. That was true with the first-generation Echo Plus and is even more so with the second-generation update. The new Echo Plus is priced at Rs14,999—it is certainly more than the Rs10,999 price tag that the predecessor had. But is it worth that much? We got one, and we surely think it is.

A lot has changed with the Echo Plus, in terms of the design. The previous Echo Plus got your attention with the fact that it was quite tall, had plain design and metallic grille design to top it off. Now however, the Echo Plus looks a lot more premium. It is shorter in height, had a fabric cover (you can choose between black, grey and white) and just looks a lot better—not to say that the previous Echo Plus looked bad in any way. There is a change at the top too. Gone is the dial control for volume, and instead like the mid-range Echo, there are buttons. In many ways, the new design language is setting a family resemblance trend, with the Echo and the new Echo Dot looking similar too.

It is fairly simple to set-up an Echo Plus speaker, much as the other Echo speakers. Open the Alexa app on your phone (free for Android and iOS), and once it detects the Echo speaker, follow the on-screen steps to connect with the Wi-Fi network at your home. The app is not needed again, until you want to enable new third-party skills or tweak the speaker settings. 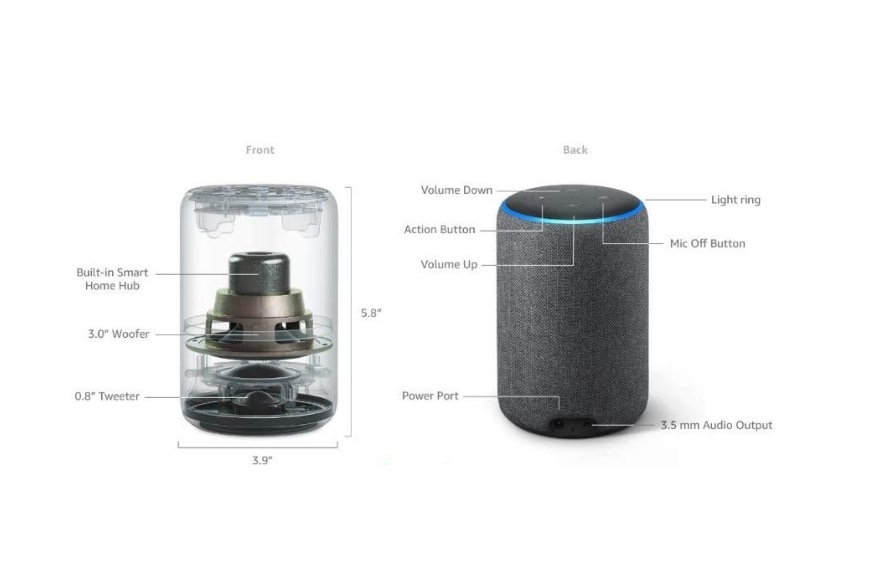 On the inside is an 0.8-inch tweeter and a 3.0-inch neodymium subwoofer. This is compared with the 0.8-inch tweeter and the 2.5-inch subwoofer in the previous generation Echo Plus. Immediately, you know that as a stand-alone speaker, the new Echo Plus will be better straight off the bat. There is certainly more bass, which is a nice touch to the music that may otherwise sound incomplete. It is not to say that this bass is window shattering by any stretch of the imagination but sounds more wholesome than before. As a standalone speaker, this is still a notch behind the Apple HomePod, but is certainly better than before. The fact that Amazon now also has equalizer options within the Alexa app for each speaker, helps tune the sound better. Not just bass, but the overall sound signature is richer. No surprise that Dolby has worked with Amazon for these speakers. The clarity of vocals is very good, and that holds well even as you push the volume higher.

If you happen to prefer a stereo setup, you could pair two of these Echo Plus speakers for much wider and room filling sound. Though we did notice that the response to any voice command you give, generates a response action half a second later than it otherwise does with a single Echo Plus speaker. But for the sake of music, what could just be a rather interesting experiment to get two Echo Plus speakers working in multi-room mode too. You will be able to seamlessly transfer music from one room to the next as you move around the home—from the bedroom to the dining room to the study room, for instance. It is fairly simple to set up, though the Alexa app in your phone dishes up the stereo mode and the multi-room mode setup options at the same place, something that can potentially confuse quite a few users.

The new Echo Plus has the 3.5mm physical connection option too, and it can worth both ways. You can use it to connect and play audio from a much larger speaker system (but then again, you’d get a smaller Echo Dot for that) or plug in an music playback source (such as a phone or an iPad). You can set the functionality of the 3.5mm connection via the Alexa app.

The Echo Plus has a built-in hub that can be used to control smart lighting (Philips Hue and TP-Link), smart plugs (Oakter and D-Link) and more—but as long as they are on the Zigbee standard. For instance, you can install a Philips Hue smart bulb into a lighting fixture at home and simply say, “Alexa, detect my devices”—and it will detect the bulb. Most smart gadgets come with their own hubs or apps that enable the smart features (such as the hub with the Philips Hue bulbs), but you wouldn’t need to set up those hubs because the Echo Plus can do all this on its own. As the ecosystem grows, you have a lot of smart lighting, smart plugs, cameras and more that can hook up with the Echo Plus—and all you need to do is to simply call out to them with whatever you need them to do.

Skills, as always, remain a very critical fixture in the Amazon Echo offering. This is basically where third-party apps (such as the Uber example mentioned above) plug into your Amazon account, and you can simply use voice commands via the Echo Plus speaker to get stuff done. Book a cab, order food, get the latest sports scores, control the TV volume and more.

There is absolutely no doubt that the newest Amazon Echo Plus is certainly an upgrade over the previous generation Echo Plus. The new audio hardware that it packs in does the job well—this is the best sounding Echo speaker till date. The new design works well too, and certainly looks the part in your living room. Yes, it costs more than the predecessor, but then again, the extra stuff that it brings to the table makes this a smart speaker worth considering. Also, because you don’t have too many high-quality smart speaker options, and the Google Home just doesn’t cut it in comparison.