Home » News » Tech » Amazon Echo Review: This Is The Sphere Of Musical Brilliance And A Smarter Alexa, All In One
7-MIN READ

Amazon Echo Review: This Is The Sphere Of Musical Brilliance And A Smarter Alexa, All In One

The new Amazon Echo is priced at Rs 7,999 and that is pretty much the same price range of the last known prices of the 3rd generation Echo and the Echo Plus before they were replaced. It is competing with this year’s new arrivals—the Google Nest Audio and the Apple HomePod Mini.

There hasn’t been a better time if you wanted to buy a smart speaker, than it is now. This year has seen Amazon, Apple and Google all make pretty important moves in the smart speaker space, which is great for choice. And great for competition. Which means more choice for you. And choice that is better than before. Amazon’s big bet is the latest Echo smart speaker, which actually effectively succeeds not just the previous edition Echo but also the Echo Plus. Because it is just that versatile. The new Amazon Echo speaker, now in its fourth generation, is competing with this year’s new arrivals—the Google Nest Audio and the Apple HomePod Mini, the latter seriously impressing with the sound that it is able to put out and yet have such a compact form factor. By not dwelling on things and making a quick rebuttal with the latest Amazon Echo, the company has made its intentions pretty clear. It wants to very well keep the crown among the smart speaker ecosystem. If you are to take a glance at the spec sheet of the new Amazon Echo, it sure means business. The new Echo is priced at Rs 7,999 and that is pretty much the same price range of the last known prices of the 3rd generation Echo and the Echo Plus before they were replaced.

On the inside, the Amazon Echo (2020) immediately brings to your table, mantlepiece or entertainment hub, a serious audio hardware upgrade. While the Echo and the Echo Plus had a 3-inch woofer and a 0.8-inch tweeter, the new Echo gets a 3-inch woofer and two 0.8-inch tweeters. The Google Nest Audio incidentally also has one tweeter. More audio hardware simply means what you get from the 4th generation Echo is much wider sound than before. And factor in the new design, and bass also seems to come across more powerfully than before. It isn’t to say that the Echo has suddenly become bass heavy, but there is that subtle dial up of the lower frequencies which simply adds to the joy of listening to music on this. It isn’t exactly the Apple HomePod Mini in terms of the design and the attempts at 360-degree sound, but the new Echo does use the new design to round off better spread of audio across a large room—most certainly better than the Google Nest Audio, which comparatively still has a direction feel to it. You kind of know where the speaker is sitting and where the sound is emerging from. The upgrade from two drivers to three has made a difference for sure. The new Echo is better poised for larger rooms than before, which means it may just be a bit too much for a smaller room such as a bedroom. The soundstage is wider, everything is more detailed and if you don’t place the Echo in a bookshelf or a shelf with enclosure on the sides, there is very good separation of audio that is clear if you are sitting some distance away from the speaker. Vocals and spoken words are clear, though the mid-range frequencies don’t always shine though as much as it does on the HomePod Mini. The Echo gets Dolby Audio tuning, but it isn’t Dolby Atmos that the more expensive Amazon Echo Studio has—but that really isn’t a deal breaker at all. Coming back to the soundstage bit for a second, the new Echo is much better at handling complex musical renditions, with the instruments now getting even better reproduction and attention than before. With the previous generation Echo speakers, they tended to sound a bit limited with certain tracks and the diversity didn’t always come across as it should have.

Amazon supports Apple Music, Spotify, Amazon Prime Music, JioSaavn, Gaana and Hungama Music. For my testing, I tried Apple Music and Spotify for the most part, and the former just sounds a bit more dynamic and vibrant in comparison to all other streaming platforms. If you really want to up your music game, you can pair two of these Echo speakers in the stereo mode.

The design most certainly brings along more than just a new visual experience. The positioning of the audio drivers as well as the fact that it necessitated the need for an additional driver makes the audio experience that much better. The cylindrical shape has been replaced by what is now a ball, except that it is flattened out at the base so that it can sit upright on its own. You’ll see a dual tone finish, with the fabric and the plastic taking turns. The front is fabric, and your choice is between blue, black and white. My recommendation would be blue, simply because it stands out and yet doesn’t seem out of place no matter what the décor or the underlying colour theme in your home.

The control buttons, for volume, action and mic are at the top while the well-recognized LED ring is now around the base of the Echo speaker. It does light up nicely and initially, that’s the last place you’d expect it to be. If you keep the Echo on a reflective table, this shines off it nicely too.

Smart home controls have always been the party piece of any Amazon Echo speaker or smart display, and the new Amazon Echo is no different. This has the complete smart home hub inside. You can control smart lights, smart plugs, smart appliances and more, either via voice command on demand or even set time-based routines in the Alexa app. For instance, I continue to use the Amazon Smart Plug with a set time-based routine to switch on the floor lamp at a certain time in the evening and switch it off just before bedtime. With the new Echo, I can additionally call out to the smart plug, or indeed any smart light, smart air purifier or more to switch them on or off at any time. 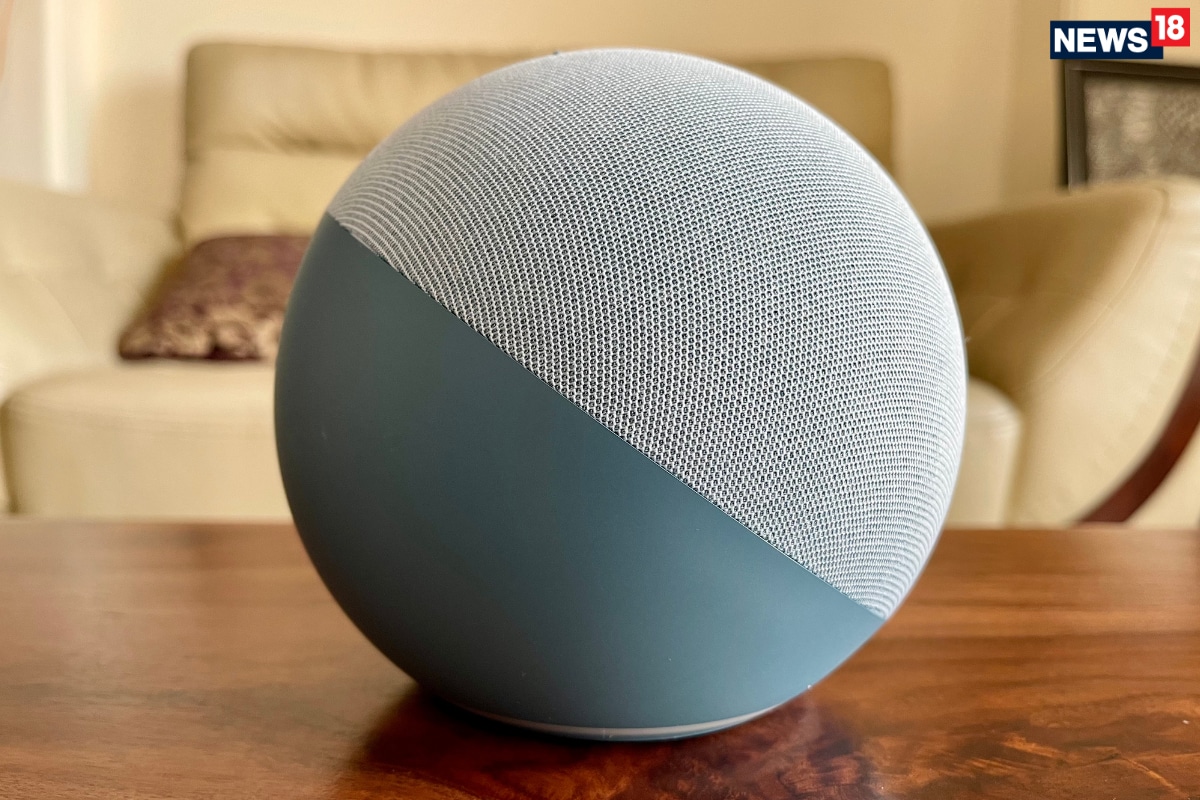 Skills, as always, remain a very critical fixture in the Amazon Echo smart speaker environment. This is basically where third-party apps can plug into your Amazon account, and you can simply use voice commands via the Echo speaker to get stuff done. Book a cab, order food, get the latest sports scores, catch up on the news and weather, check out a new recipe, listen to a podcast and more.

The new Echo will also be able to do an automatic sound adjustment according to the acoustics and the layout of the room you place it in—this is something we have already seen in the Echo Studio smart speaker. There really isn’t a way to know how much change it does because you cannot turn this on or off on the fly. The processing is handled by the first-generation Amazon AZ1 Neural Edge processor. Amazon says this all-new silicon module is purpose-built for accelerating machine learning applications, which means the powerful inference engines can run quickly. These include the all-neural speech recognition model that will be able to process requests much faster, allowing Alexa to be responsive sooner. That is the big Alexa update for the year—conversational responses.

Amazon’s focus is on trying to make Alexa converse more like a human—we may not always take each other’s name and will always ask if there is something that we don’t understand. You can now talk to Alexa like that, as if it is a conversation rather than an order being given out every time. Over time as you use Alexa more and more on a daily basis, it will start to understand context better too.

The Last Word: This Amazon Echo Is A Generational Change

I never expected to say this, but here is what it is—the new Amazon Echo is a big upgrade over pretty much every generation of the Echo before it, and also the Echo Plus. And also, the Google Nest Audio. The new design, the updated hardware, the audio processing with Dolby Audio and the more conversational Alexa just come together to make this the biggest update to an Amazon Echo speaker, ever. Whether you already have an Echo or you intend to buy a new smart speaker this year, the new Amazon Echo, the 4th generation, should very much be on your radar. Along with the Apple HomePod Mini. It is just too close to call between the two when it comes to audio, though Alexa has a significant advantage over Siri at this time. And yes, the Echo is just that much better if most of your music playlists are loaded with bass heavy music.