Apple HomePod Gets The Newest iOS 12 Update, Its Biggest Software Release Yet

The Apple HomePod smart speaker gets music search based on lyrics, the ability to make and receive phone calls, identify callers and now supports even more languages

This is the big iOS roll-out day for Apple, and millions of iPhone, iPad and iPod Touch users will be getting the latest software as an over-the-air update on their devices. iOS 12 for the iPhone and iPad is in most ways an improvement over iOS 11, with a focus on improving performance particularly on older devices, improving battery life and an even greater focus on artificial intelligence. However, iOS 12 for the HomePod is also releasing now, and it is completely the opposite in many ways—it is the biggest ever software release for Apple’s smart speaker, adding a whole lot of new features to an already robust product.

This is a 1.5GB update, which will be downloaded and installed on your HomePod smart speaker. This will automatically install, if you have that option enabled, if your HomePod already runs the iOS 11.4 software version. The new iOS 12 for HomePod now adds features that make it even better to interact with the artificially intelligent virtual assistant, Siri. 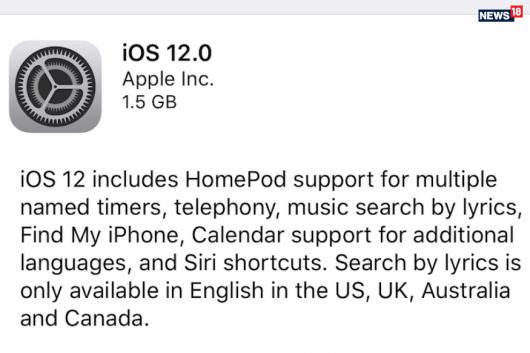 For starters, music aficionados will appreciate the ability to now search for a music track they wish to listen to, but don’t exactly remember the name or the artist but do have a faint recollection of the lyrics. Now, simply say, “Hey Siri, find song with lyrics - I don't know if I would be alive today, With or without you like night and day” and it’ll instantly tell you this is the track called Don’t Leave Me Alone by David Guetta and play that back for you.

Then there is the whole productivity aspect that comes into play, particularly useful if you need to rely on HomePod occasionally for work or actually have placed it in a home office, for instance. iOS 12 for HomePod now allows you to make and receive phone calls via the HomePod, without having to pick up your iPhone. If you are getting a call on your iPhone, you can simply ask Siri to identify and spell out who is calling—without having to get up or pull out your iPhone from under a pile of papers. The calendar support for HomePod extends to add even more languages, since HomePod is now also launching in more countries.

If you tend to get separated from your iPhone often, and can’t seem to locate it, simply now call out to the HomePod (assuming it is a smart speaker placed in a static location and you have not managed to misplace that) and ask it to locate your iPhone for you with an audible ping notification.

One limitation on the HomePod thus far was that it would only connect with the Wi-Fi network that the iPhone being used to set it up was connected with. Now, you can change the network on the HomePod directly—great news if you wish to get it hooked up to a network with better signals at the HomePod’s location, for instance.

From what we have experienced thus far, the HomePod is the undisputed winner when it comes to music playback. It has the most capable audio playback hardware, amongst the competition that includes the Amazon Alexa powered Echo speakers and the Google Assistant based Google Home speakers. It has a 360-degree design that has a feature known as Spatial Awareness, which detects the physical layout if the room it is placed in and equalizes the sound accordingly—no user input needed. This has an upward facing high excursion woofer which reproduces deep bass, seven beamforming tweeters each with their own amplifier and advanced signal processing from the Apple A8 chip. It has significantly better audio hardware than any of its rivals, in a size that isn’t much bigger—the bass that we get from this is unmatched by the Amazon Echo Plus or the Google Home, both of which are fairly capable smart speakers in their own right. The HomePod is heavier though—but then again, heavier speakers are generally considered better for sound quality.

The Siri integration is better than ever before with iOS 12, and will answer queries, navigate, get you the news and weather and even set calendar entries, among other things. It can also be used to control HomeKit-compatible IoT (Internet of Things) devices such as smart lights and smart thermostat too. HomePod will continue to be controlled through the Home app on iOS devices such as the iPhone and the iPad, and there is no separate app for the HomePod.