Apple iPad Air (2020) Review: This Evolution Is Closer To The iPad Pro Than You May Imagine

As an iPad line that starts at Rs 54,900 the Apple iPad Air is plugging the gap between the iPad and the iPad Pro lines. This is powered by the same A14 Bionic chip from the Apple iPhone 12 series and is the first 5-nanometer chip. The iPad Air also ushers in a new Touch ID avatar.

If you were looking to buy an Apple iPad all this while, you had the iPad, last year's iPad Air and the iPad Pro lines to choose from. But all said and done, there was still a big gap between where the top spec iPad variants finished (around Rs 49,900 for the 128GB Wi-Fi + Cellular) version and where the iPad Pro line-up started, with the 11-inch iPad Pro 128GB with Wi-Fi priced at Rs 71,900. The gap was even bigger when you consider a relative like-for-like in terms of storage and variants. That is exactly the gap the new Apple iPad Air wants to plug, and it does so in ultimate style. There is the undeniable inspiration from the iPad Pro devices, which is great in the long run too. In fact, while the previous generation iPad Air was perhaps closer to the entry-spec iPad in overall personality and experience, the Apple iPad Air (2020) leans the other way, towards the iPad Pro.

The Apple iPad Air line-up is basically two storage variants the option of Wi-Fi and Wi-Fi + Cellular as well as five colours. You can have the Apple iPad Air in 64GB and 256GB storage options. If you are happy with the Wi-Fi only option, the 64GB costs you Rs 54,900 and the 256GB option is priced at Rs 68,900. If, however you want the Wi-Fi + Cellular option, the 64GB variant is priced at Rs 66,900 while the 256GB storage option costs Rs 80,900. The Apple iPad Air is available in Space Grey, Silver, Rose Gold, Green and Sky Blue colours. We are seeing the largest ever colour choice line-up on the iPad Air, in fact on any iPad series ever. And if you order this on the Apple India online store, you also get the free Engraving option in case you want to get your name, a special date or initials engraved on the iPad Air, for instance.

The Apple iPad Air 2020 switched to a very iPad Pro-esque design. That means flat sides, rounded off corners and the display has rounded edges as well. There is no home button below the display. This is, in a way, very similar to the 11-inch Apple iPad Pro. Great then, because this change does mean more screen in a smaller footprint, shaving off the thicker bezels and the space for the home button below the screen, that we had in the Apple iPad Air 2019. So much so, the design refresh also brings the USB-C port to the iPad Air for the first time, something that was exclusive to the iPad Pro line-up till now. The Apple iPad Air tips the scales at 458 grams for the Wi-Fi model and 460 grams for the Wi-Fi + Cellular model. These are both 13 grams lighter than the iPad Pro 11, and for that we must factor in the different display tech, the different processors and the camera modules that the iPad Pro carries. Nevertheless, it is the same mix of anodized aluminum at the back, the aluminum frame and the scratch resistant glass at the front with oleophobic coating. Important to note that the Apple iPad Air has a 10.9-inch display and not 11-inches as the iPad Pro, but the rest of the dimensions remain pretty much as is. Including the Magic Keyboard accessory, which is the same for the Apple iPad Air 2020 and the 11-inch Apple iPad Pro.

There is genuine excitement with the addition of the green and blue colour options, both of which looks really good. What we have photographed here is the green colour. These are nice add-ons to the Silver and Rose Gold as well as the updated Graphite colour options. The one trick that Apple perhaps missed is with the positioning of the front facing FaceTime camera. It is still above the display when you hold the iPad Air in portrait mode, which means when you do turn it around into the landscape mode for FaceTime video calls, Zoom calls, hours on Google Meet and more, the camera is sitting at one side of the display. Samsung had solved this by repositioning the front facing camera on the Galaxy Tab S7+ to sit directly above the display in the landscape orientation, which mean you could naturally look at the screen and not have your eyes looking elsewhere. The Touch ID remains a fixture on the new Apple iPad Air as well. Now that the home button below the screen is gone, Apple has integrated this in the power button. That is why the power button is larger than those in other iPads, including the closest reference points which are the iPad Pro devices. This evolution of Touch ID also just works smoothly and is very responsive. Convenient, secure and just as expected. If you do lift your finger too soon, the iPad will remind you to rest your finger on the sensor for a bit longer before it unlocks.

That being said, and mind you this is totally subjective, it may be a bit of a learning curve for an iPad user who is upgrading from the Touch ID on the home button generation. As a force of habit, the finger will still try to touch what is now the lower reaches of the display.

Doing duties under the hood is the new Apple A14 Bionic chip, that is also powering the new Apple iPhone 12 Mini, iPhone 12, iPhone 12 Pro and the iPhone 12 Pro Max. In fact, this processor would have in normal circumstances been introduced with the new iPhone 12 line-up and subsequently made it to the iPad Air, but due to the reverse launch cycle this year owing to various production and logistical challenges due to the virus doing rounds, the iPad Air got that privilege. This has 11.8 billion transistors, sour high efficiency cores with two high performance cores and is as much as 40% faster in terms of performance than the predecessor the A12 Bionic, and up to 30% faster when it comes to graphics. Machine learning is twice as fast with 11 trillion operations per second and that’s 10x jump in computational power.

The A14 Bionic is the first 5-nanometer chip and the immediate performance and battery gains are very much on the menu. I’m not someone who would get all caught up in synthetic benchmarks and all that, because it is the real-world performance that matters. On that aspect, the A14 Bionic in the Apple iPad Air delivers pretty much all the performance that you would expect. If I may say so, and even though the processor lines and generations are very different, the Apple iPad Air (2020) is right up there with the latest generation iPad Pro as far as most usage scenarios are concerned. Be it multitasking, be it gaming, be it editing photos on the Pixelmator Photo app, it is all very evenly matched.

The Apple iPad Air doesn’t heat up when you really multitask on it, it doesn’t show any signs of stutter or sluggishness, even momentarily and pretty much delivers the high-performance experience that you would expect from an iPad this powerful. That’s the effect of Apple allowing the iPadOS to free itself from the iOS for iPhone but still not becoming any more complex over time. It is, and many may argue on this but it’ll be futile, a neater and a more reliable computing experience than Windows 10. At least in my opinion—Windows 10 is prone to slowdowns, crashes and all sorts of weird eccentricities, partly introduced by Microsoft themselves with the well documented monthly update mess, and partly by third party software such as device drivers. If you need a computing device that doesn’t complicate things for you, an iPad is a better bet. Battery life also gets the frugality boost with the new A14 Bionic. Apple claims 10 hours of web browsing or video playback—and I believe that is a very conservative estimate. With multiple tabs open in Safari and Google Docs used all through with Apple Music streaming to my trusty Marshall Kilburn (the previous generation, not rich enough to upgrade at this time), this started the day at 100% charge and ended the day with 46% battery still remaining. This at 5pm. All through, the brightness was around 40%. That is a fantastic return for a convertible computing device that you will very well consider taking to work every day or for meetings, when the world reopens again.

Apple Pencil and Keyboard Are The Optional Yet Important Ingredients

The layout is very similar to a MacBook, in the sense that these are now properly defined keys, with good spacing between each and 1mm of travel as well. This is backlit too, great when the lights are off and the deadlines have to be met. The trackpad smaller than the larger Magic Keyboard for the iPad Pro 12.9 but once you get the hang of the real estate, you will find this slick for the the iPadOS multi-finger swipe gestures. The way the hinge works is just fantastic—the iPad, once docked on, can be positioned in any angle you want. The keyboard dock also has a USB-C port which means you can plug in the Apple iPad Air on charging the way you would a laptop, and not have a cable spoiling the view to attach to the USB-C port on the iPad itself. 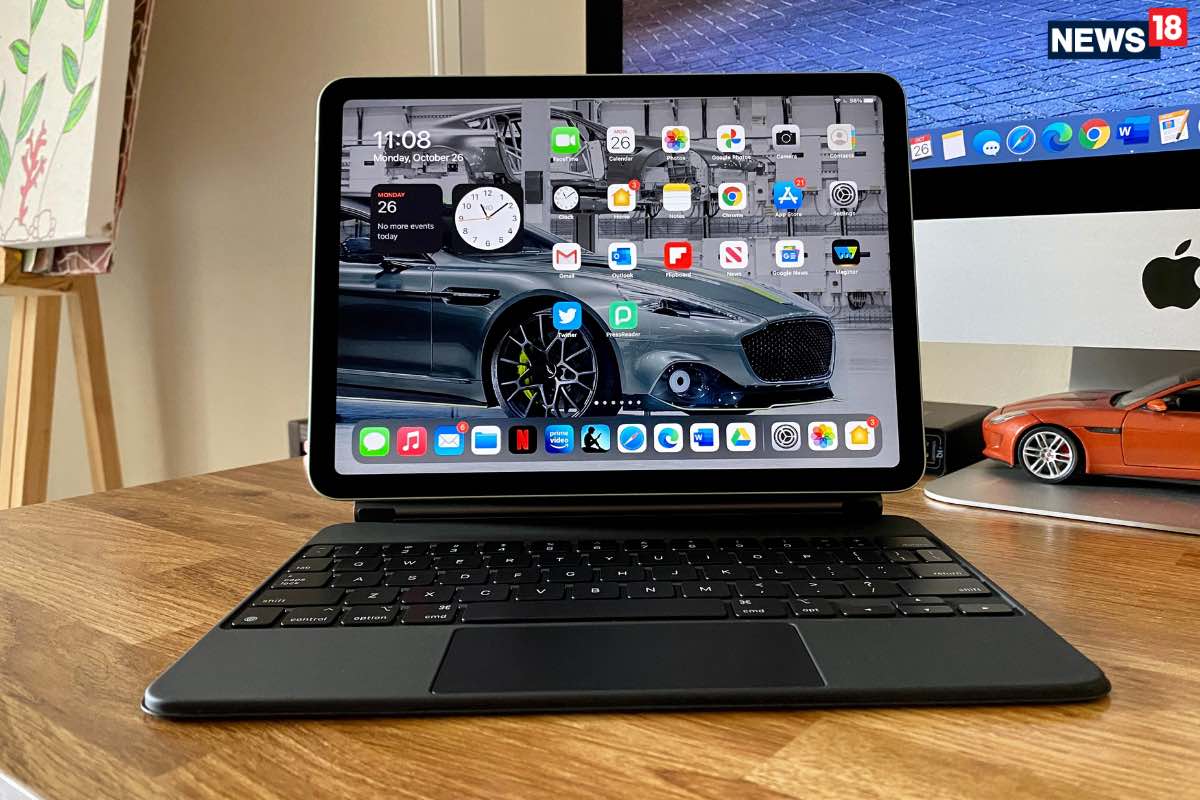 Display Is All About Delivering A Versatile Canvas

This is a 10.9-inch Liquid Retina display, complete with True Tone, wide colour gamut and similar pixel density as the iPad Pro. This is a bright display, though rated just below the iPad Pro 11 as far as the peak brightness goes. That really wouldn’t matter for most users. The Apple iPad Air’s display is adequately crisp, with natural and well separated colours as well as fairly deep black as well. You can be rest assured that this screen ticks off pretty much everything you will need for web browsing, working on documents, getting some Netflix binge watching on the weekend and for photo editing.

That being said, the Apple iPad Air does not have the 120Hz refresh rate that the Apple iPad Pro line-up has. Well, you got to save something for the Pro range!

The Apple iPad Air looks a lot like the 11-inch iPad Pro, and that is a great thing. Mind you, there are some under the hood differences though. It’s a different processor line, for starters. The Apple iPad Air does not get Face ID facial recognition, it doesn’t get the ProMotion high-refresh rate display, it doesn’t have the multi-camera setup and the LiDAR that the iPad Pro has and also doesn’t have quad speakers. That is how the two lines, the iPad Air and the iPad Pro remain well distinguished on the spec sheet. None of the omissions on the Apple iPad Air are a big deal, mind you.

As an iPad line that starts at Rs 54,900 the Apple iPad Air is pretty much plugging the gap between the iPad and the iPad Pro lines—and it was a significant gap in terms of the experience, specs and even the design language. It was a wide gap that needed filling, and this gets you much closer to the iPad Pro experience for a significantly lesser outlay up front. At the same time, it is also going a bit further away from the standard iPad line. This, in a way, is getting you very close to the iPad Pro experience. And for most users who need to balance entertainment and productivity, this is all the tablet they will need.