The Apple Event 2021 announced a bunch of new hardware that includes the M1 SoC and XDR display coming to the new iPad Pro, and finally, the much awaited AirTag trackers!

The Apple Spring Loaded event 2021 has concluded, giving us a whole bunch of new hardware to go gaga over. The centrepiece was undeniably the all-new 2021 iPad Pro. The latter may have retained a similar design language as before, but the biggest change comes in the form of the iPad Pro getting the M1 SoC as well. This opens up even closer integration between Apple operating systems, which impacts a wide range of things. The most impressive other new feature on the 12.9-inch iPad Pro is its Liquid Retina XDR display, which Apple claims offers the same level of professional display accuracy as its Pro Display XDR – baked straight into the new iPad. The tablet is also available in an 11-inch variant, alongside the other launches that include a 24-inch M1 iMac, the AirTag tracker (finally) and Apple TV 4K with high frame rate HDR playback.

The 24-inch iMac gets a display and body that’s incredibly thin at 11.5mm, and comes in a set of seven different colours – even colour coordinated power cables, keyboards and mice. It too features the M1 SoC, and is available in two shades of performance. It gets the new macOS Big Sur with Universal Apps benefits, and other features such as a full HD FaceTime camera, a three-mic array with beamforming, and six-speaker audio output. The new iMac also replaces the large thermal plate on the back of older iMacs with a new cooling design that Apple claims needs only two fans and operates as silently as 10dB. For more details about the exact features that Apple announced, read our live blog of the event here. 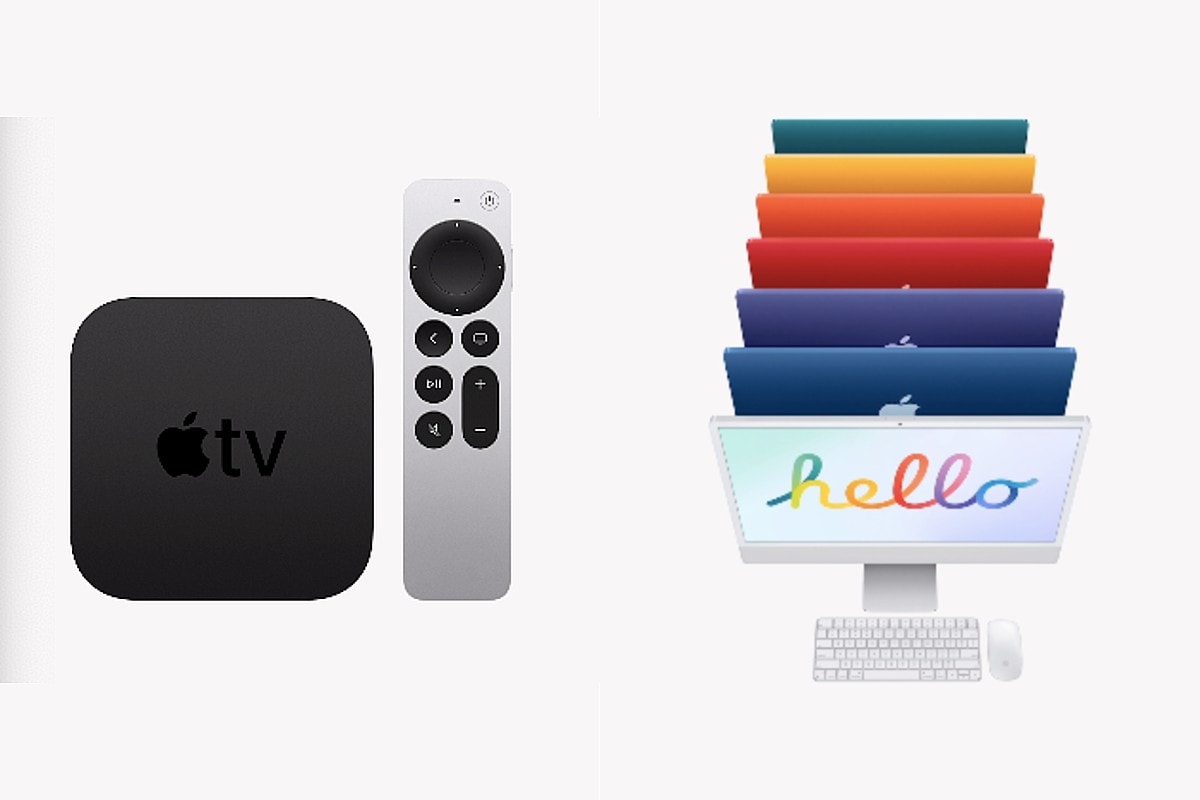 The iMac also gets four USB-C ports with two Thunderbolt 4, support for up to 6K external displays, and an Ethernet port that actually sits on the power brick. The desktop is powerful enough to take on 8K video workflows while also multitasking, which is similar to what Apple claims with its iPad Pro as well – the latter can apparently produce super realistic and real-time AR and VR visuals with its new camera setup, for professionals who need such things.

The AirTag syncs with the Find My app on iOS, confirming rumours that are now years old. The trackers also get privacy features such as randomised identifiers, and offer users audio, visual and haptic feedback to locate their keys and wallets. Apple TV 4K, meanwhile, gets a new Siri remote with a click wheel that’s reminiscent of the good old iPods, and more importantly, high frame rate HDR playback. It also gets a TV colour calibration mode that uses the iPhone to calibrate TVs to professional standards. Other updates announced today include a new purple shade that’ll be available with the iPhone and iPhone 12 Mini, an Apple Card update in terms of credit-worthiness of co-cardholders, and an update to the interface and subscription of the Podcasts app – in line with podcasts growing in popularity over the months of the pandemic.

The new Apple TV 4K with the new Siri Remote bundled costs Rs 18,900 in India, while just the remote (which is compatible with older Apple TVs) will cost Rs 8,500. Pre-orders for it begin April 30, sales from mid-May.

The iMac, which comes in two performance variants, is priced in India from Rs 1,19,900 for the base variant and is available in four colours. The higher configuration is available in two storage sizes – 256GB and 512GB, and are available at Rs 1,39,900 and Rs 1,59,900 respectively in seven colour trims.