If you are considering the rather cool looks of the Asics Runners Face Cover as something you would want to be seen wearing, make sure you are buying this for outdoor and indoor exercise routines—running, jogging, cycling etc. But it isn't recommended you wear this to a crowded market or a mall.

Desperate times call for desperate measures. With the Coronavirus pandemic still dictating how things are done globally, there is extensive focus on face masks and face covers that can filter out as much of the airborne particles as possible. And that is exactly why fitness and sports apparel, footwear and equipment companies are getting into the masks business. None have probably done it as elaborately as Asics though, which has the new Asics Runners Face Cover that is meant for runners who will need protection from airborne particles and droplets as they are out and about, often in close proximity of other runners. The Asics Runners Face Cover does things a bit differently compared with the conventional takes on masks—it is designed more to protect others as well from what you may be breathing out, exactly solving the fear that many have with N95 masks as well which don’t protect the people around you by spreading what you breathe out, back into the surroundings.

The Asics Runners Face Cover does cost a fair bit more than most masks and is priced at Rs 3,499. This is not a mask that claims to filter out viruses or bacteria the way a surgical mask or even an N95 mask would, but it will block larger droplets and act as a barrier for spittle particles. The material is anti-bacterial though, to keep the person wearing this mask safe. The design is quite interesting. This has a fairly sturdy build which means the mask will retains its shape even after a few uses. That being said, remember, the Asics Runners Face Cover is meant for your fitness runs when you may be out crunching the miles in an open space with perhaps just a handful of people around. 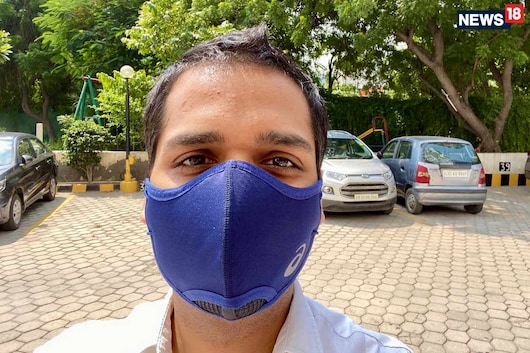 The design, the materials and the construction are done in a way to enhance the airflow, something that runners would need as they draw in deeper breaths—and most masks that have the N95 or the N99 ratings do not allow that. This still allows air to pass through a tad too freely to be rated as a virus capturing mask. Honestly, I would not recommend that you also wear this if you take the risk of heading out to potentially crowded places such as a marketplace or a mall.

There is a mesh on the lower side of the mask, near your chin. That is to push what you breathe out downwards, rather than directly in front of you. This in a way also protects people around you who will also be breathing at roughly the same height as you are.

All said and done, the fit of the Asics Runners Face Cover is something that I wish other masks also adopted. These don’t hook behind your ears and instead, you have two pairs of drawstrings which run either side of your ears all the way back where the cord lock with the pull tab allow you to lock this in exactly as how you want the fit to be. You also have loops that can be rightened behind your ear for an even more secure fit, but in my experience, you can optionally choose to not bother with these and yet the Asics Runners Face Cover remains securely fit.

The clever design element is around where the mask touches your nose. Unlike most masks that have a piece of metal or thick plastic, the Asics Runners Face Cover has a stiffened finish here that allows the mask to hug the nose along the slope. It is much easier to find a comfortable fit with this and there is nothing pinching into your nose.

I quite like the peacoat colour which looks quite sophisticated. There is very subtle branding as well with the Asics logo on the side. This mask does get glances from people who are passing you by.

I did not find any sweat build-up in the mask even after wearing this for about 2 hours outdoors on a warm late summer afternoon, which is good news if you live in the warmer climes. I don’t wear glasses but my sunglasses didn’t face any issue of fogging up when I was wearing the Asics Runners Face Cover—a lot of that has to do with how you position this around your nose and how you lock in the cords behind your head. That being said, the sunglasses need to be adjusted factoring in the thicker material around the nose which means you will have to place the sunglasses slightly away from your nose and rest them on the face cover itself. I know, not the slickest implementation, but something to counter the bright summer sun.

Asics says the Runners Face Cover is reusable. You can wash this under a tap with running water and leave it out to dry immediately. I haven’t felt any sweat build-up yet, which hasn’t warranted any washing requirements, but I do make it a point to sterilize this in a UV-C sterilizer device after every use.

If you are considering the rather cool looks of the Asics Runners Face Cover as something you would want to be seen wearing, make sure you are buying this for outdoor and indoor exercise routines—running, jogging, cycling etc. Basically, either open spaces or areas where there isn’t a lot of population around you, in close proximity. This is a very good exercise mask, since it allows you to breathe better at a time when your body values oxygen the most. That isn’t something other masks allow, which can do more harm than good to the human body when you exercise. All this, assuming you aren't in the midst of a crowd of fitness enthusiasts or in a crowded gym. But like I said, I wouldn’t want to recommend you wear this to a market or a mall. This isn't N95 rated, and Asics never claimed that either.