ASUS 'Republic of Gamers' Series Gets Desktop, Laptop And Other Additions at Zennovation: CES 2017

ASUS has revealed a range of products for its 'Republic of Gamers' series at CES 2017. (Image: ASUS)

The latest gaming products come as an addition to the widely renowned gaming series of ASUS named Republic of Gamers (ROG).

The latest gaming products come as an addition to the widely renowned gaming series of ASUS named Republic of Gamers (ROG). Gamers across the world have been anxious for the products to be launched at CES this year and here is what ASUS has to offer in this segment: ASUS has revealed a range of products for its 'Republic of Gamers' series at CES 2017.
(Image: ASUS)

It also has the MechTAG mechanical-switch keyboard, which features anti-ghosting with 30-key rollover, and customizable ROG Aura RGB LED effects for each key. ROG G752 is driven by an unlocked Intel Core i7 processor and a VR-ready NVIDIA GeForce GTX 1070 GPU.

It also offers HyperDrive RAID 0 and the latest NVM Express (NVMe) and PCI Express technologies, ROG-exclusive 3D Vapor Chamber and a 120Hz panel with NVIDIA G-SYNC technology for 120Hz of refresh rates on its wide-view panel.

The backlit anti-ghosting keyboard with 30-key rollover is another highlight of G752. 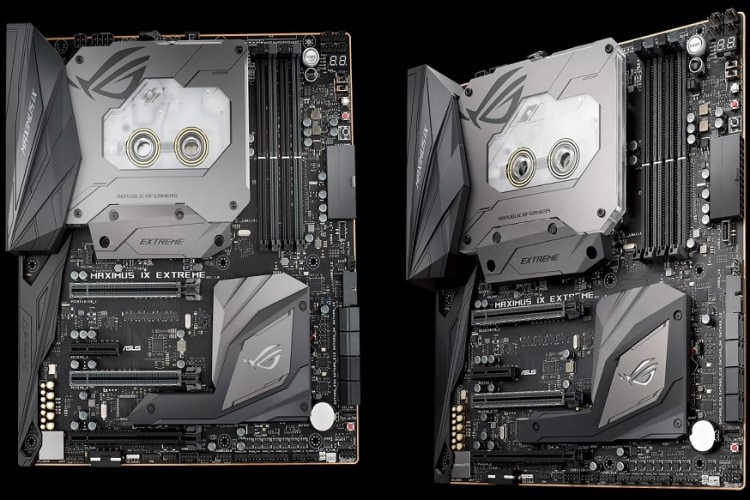 Maximus IX Extreme is the world's first motherboard with an integrated monoblock as claimed by ASUS and is manufactured by Bitspower.

The monoblock detects the flow rate of the water coolant and has dedicated circuitry to detect both the inlet and outlet temperatures as well as leakage.

This case highlights the motherboard’s Aura Sync RGB lighting, performance, and water-cooling features with a design featuring touchscreen controls and white-pastel coolant that glows in the same colours as the RGB lights. 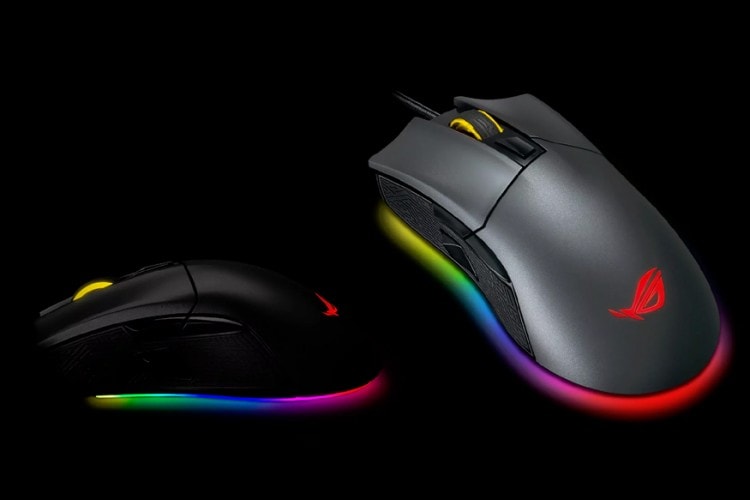 Gladius II also has a DPI button to toggle sensitivity and a DPI target thumb button for short bursts of instant precision. 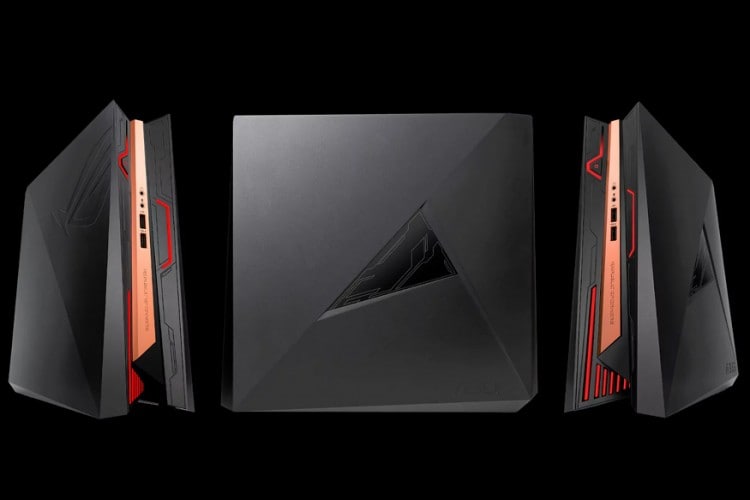 The PC is housed in a tiny 4-liter chassis and includes Aura Sync for RGB light shows that can be synchronised with a variety of ROG peripherals, and with 10 different effects.

GR8 II can be specified with M.2 PCIe SSDs and a 2.5-inch SSD/HDD storage for both increasing game boot-up speeds and hosting a large game library.

Two VR-friendly HDMI ports enable simultaneous connection of both a VR headset and a gaming display.

ROG GR8 II has a specially-tuned cooling system with copper heat pipes and dual fans to purge heat from the system.

Vents and dedicated chambers for the processor and graphics card ensure the right amount of airflow to each component. 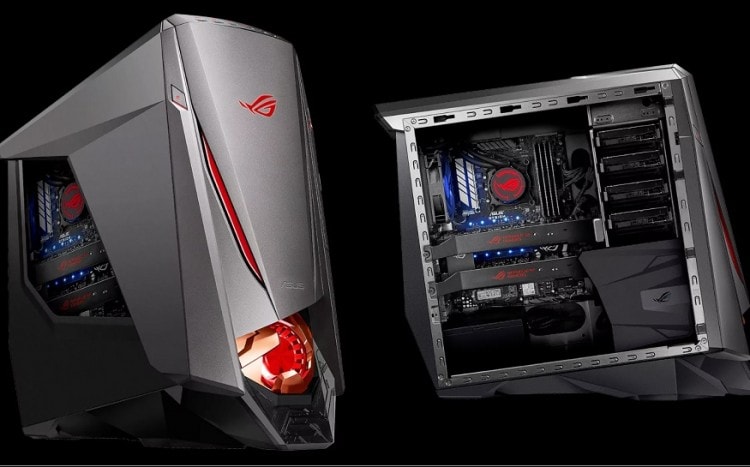 Gamers can customise Aura with different lighting colours and effects to reflect the feel of the game that is currently being played, or to show their own unique style. 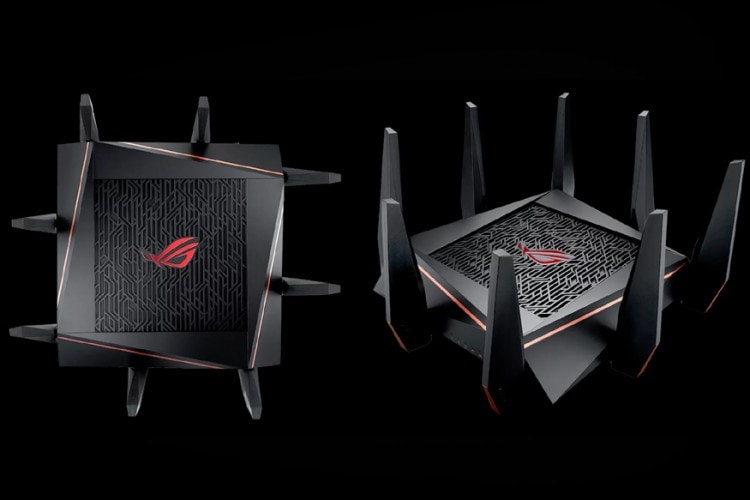 It has the Gaming Center for an instant overview of the gaming network, Game Boost to prioritise gaming traffic and Game Intrusion Prevention System (Game IPS) to offer integrated security based on Trend Micro technology. 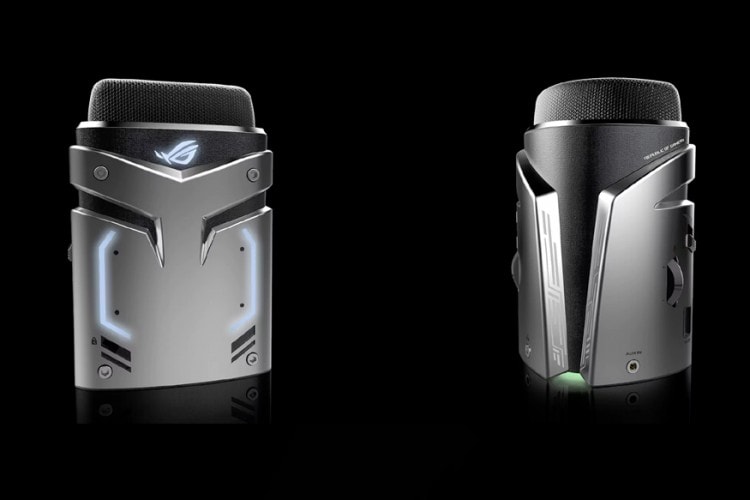 ROG Strix Magnus is a gaming microphone with three condenser capsules and is the very first mic from ROG.

Designed for live-streamers and avid gamers, the company claims that the Strix Magnus is the industry’s first gaming microphone to offer both environmental noise cancellation (ENC) and customizable Aura RGB lighting effects.

The new gaming mic has an auxiliary port for recording audio from a musical instrument or smartphone and comes with an external USB hub for connecting additional devices.