What goes in favour of the new Apple iPhone SE are the up to date specs and a design that simply works. But we cannot discount the likes of the OnePlus 8, OnePlus 7T and the Samsung Galaxy S10 Lite which are very much in the mix.

The much-awaited newest addition to the Apple iPhone line-up is here. It is called the Apple iPhone SE, the second generation. It follows through on the first-generation iPhone SE, which was launched in 2016. This is also not the iPhone 9 as many had predicted, and those predictions were as wide off the mark as one should have expected. There was great hope with which everyone looked towards Cupertino, because it was meant to be the affordable iPhone which many were craving for. In a way, it is, with the price tag of $399 for the entry-spec 64GB variant. Or Rs 42,500 onwards if you are in India. The second-generation iPhone SE retains what has worked well for Apple in the past. The iPhone 8 inspiration is very much apparent, though what is inside is newer and in-line with the more expensive iPhone 11 line-up.

Let us get you through the headline specs first. This runs the Apple A13 Bionic chip, which is the latest processor also powering the Apple iPhone 11 line-up. The A13 Bionic also has a dedicated 8-core Neural Engine capable of 5 trillion operations per second, two Machine Learning Accelerators on the CPU and a new Machine Learning Controller. It has a 4.7-inch Retina HD display. This display also takes advantage of features such as True Tone which adjusts the display according to the ambient lighting, as well as Dolby Vision and HDR10 compatibility. The iPhone SE second-generation battery also gets the fast charging capabilities, which a fully discharged battery charging as much as 50% in 30 minutes. And yes, iOS 13 is the party piece.

Let us talk about the screen real estate

Read this again—4.7-inches. Yes, the iPhone SE second-generation gets a 4.7-inch display, an IPS LCD while at it. That’s the same as the Apple iPhone 8 from a few years ago. In a way, the design and the shell are very reminiscent of that phone from the days gone by. Nothing wrong in that, because the iPhone 8 was an excellent phone to hold and use. At 4.7-inches, this is one of the rare compact smartphones in this day and age—when smartphones are becoming larger and those who prefer compact phones are left with very few options. And I know a lot of people who still would prefer compact smartphones and aren’t entirely comfortable using the large screen blocks that smartphones have become. There could be the argument that the iPhone 8 Plus size, with its 5.5-inch display would have been ideal. But well, that is a call which Apple had to take. If you look at it from the perspective of variation, that would have perhaps gotten too close to the 6.1-inch display that the iPhone 11 and the still-very-much-on-sale iPhone XR offer. Surely, Apple has the data to prove that people still want a compact smartphone option.

What about the power?

Just because you are buying the most affordable iPhone in the line-up doesn’t mean you compromise on specs or performance. The A13 Bionic chip is the one that does duty in the iPhone 11 line-up as well. Pretty mighty when it comes to all the artificial intelligence smarts and computational photography bits—something we will come to in a moment.

There is often the unnecessary debate about facial detection not working on smartphones when the person is wearing a mask. Of course, they don’t unlock. That is how face recognition is supposed to work, isn’t it? The iPhone SE second-generation has Touch ID, a fingerprint sensor that doesn’t care if you are wearing a face mask. In the post-COVID world, this may be very relevant, when face masks become a requirement.

Storage isn’t a deal breaker, but isn’t up with the times

Then there is the small matter of the storage. It is 64GB, 128GB and 256GB. That is at par with the iPhone 11 and the iPhone XR. There can always be the debate that at least 128GB should be the minimum, considering that is what the OnePlus phones offer, and so does Samsung with the Galaxy S10 Lite—all players in the same price band.

Camera and the heavy reliance on computational photography

The iPhone SE gets a single camera at the back for the photography requirements, but Apple says this 12-megapixel f/1.8 aperture Wide camera is completely new. It uses the image signal processor and Neural Engine of A13 Bionic for computational photography which includes Portrait mode, Portrait Lighting effects and Depth Control features. There is a lot of reliance on the A13 Bionic chip for the Smart HDR photography, which combines multiple shots into what is the final photo that you see, in an attempt to improve the lighting as well as detailing. Portrait photos will require machine learning to understand faces and detect the depth in the frame. In complex situations, it may not be as error-free as the Portrait photos taken by iPhones that have multiple cameras working together. But the rest of the time, this new camera hardware will be right up there in terms of detailing.

The charger really needs an upgrade

The iPhone SE second generation supports 18-watt fast charging. So, what would you expect? What you surely wouldn’t expect is a 5-watt charger as a default accessory in the box. To get the quick 0-50% charge in 30 minutes, you’ll need to head out and buy the bigger and faster charger. In a way, that takes away from the seamless experience of upgrading that one would have perhaps expected.

That said this supports wireless charging too, just like the iPhone 8. Which means if you have a wireless charger, you can plant the new iPhone SE on it and it’ll juice up the battery. 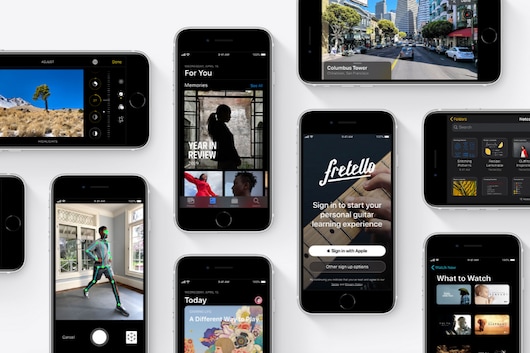 Why would you pick this iPhone?

What goes in favour of the iPhone SE second-generation is the up to date specs and the design that is one that simply works.

We have already established this—not everyone wants a big phone. Compact displays are still popular among buyers, provided someone is willing to offer them. But as things stand, most phones launched now are big. Bigger than it is comfortable for many. That is where the iPhone SE becomes very relevant, particularly considering the performance it will offer.

If screen size isn’t a big deal for you, then you need to decide whether you want an iPhone, or you aren’t adamant about it.

If you are, then there is also the iPhone 11 which starts out with an official price tag of around Rs 68,300 but can be yours for around Rs 55,000 (or at least could be till the Coronavirus came along and the lockdown happened) if you played the deals and the credit card offers right. Spending that little more would make sense if photography is important for you—that offers a dual camera. The iPhone XR is still around, with a larger 6.1-inch display that could still be a great deal with the cashbacks and credit card offers that are a part of the game now. Remember, that has a sticker price of Rs 52,500 before the deals kick in. I quite like this phone even now, to be honest.

What about the Android alternatives?

The fact that you are considering the Apple iPhone SE second-generation means you want top-notch performance. That discounts a lot of the pretend flagship killer Android phones, and we get into the business end of that debate with the OnePlus 7T (simply because we don’t know the pricing of the OnePlus 8 just yet). The prices for the 7T start at Rs 34,999 with top notch specs, a good display and performance that simply delights. Then there is the Samsung Galaxy S10 Lite, which runs the Qualcomm Snapdragon 855 processor as well, very good balance between specs and performance and is priced around Rs 40,000.

But, why is the iPhone SE more expensive in India?

Apple has not released the breakdown of exactly how it has priced the iPhone SE second-generation in India. No company does, why should they? The starting price tag of Rs 42,500 is more than the $399 price tag in some other countries. But we need to factor in the US$ pricing which is at its strongest in a long time. At the time of writing this, one US$ is equal to Rs 76.786, according to the ever reliable XE. Any company would factor in currency variations into the pricing—one cannot assume that the currency rates will only change towards the favorable. Then there is also the higher GST rates which became applicable earlier this month (18% up from 12%, something Apple has to factor in as well. There are also local state taxes that need to be paid, in certain states.

Also remember, at this time, component prices are on the up due to a global shortage as the world is still attempting to recover from a Coronavirus pandemic.