News18» News»Tech»Call of Duty Mobile Review: A Brilliant Game that Can Outrun PUBG Mobile by a Mile
6-MIN READ

Call of Duty Mobile Review: A Brilliant Game that Can Outrun PUBG Mobile by a Mile

Call of Duty: Mobile is a mighty promising game, and is now available on both Android and iOS. (Image: Activision/News18.com)

Call of Duty: Mobile is fun, refined, rich and full of gunfire, along with the added flavour of one of our all-time favourite shooter games, ever.

Anyone that has ever played a video game has at least heard of Call of Duty, and anyone to have ever played a mobile game has at least heard of Playerunknown’s Battlegrounds, ubiquitously known as PUBG Mobile. So, what happens when you combine all of these factors together? Activision, in partnership with Tencent and Timi Studios, had a similar divine intervention when they unveiled Call of Duty: Mobile in front of enthusiastic but cautiously skeptical crowds. A few months, and a fervent week of playing later, we can state with ease that Call of Duty: Mobile is one of the best shooter games made for phones. In fact, it might even be one of the best all-time games ever made for phones.

While that’s pretty much all you need to know about it before downloading, here’s why we think it’s great. Call of Duty: Mobile opens just like any new-age mobile game would, with regular rewards for logging in, added rewards for being among the early players of the game, premium pass monetisation for those who wish to play with more intent, and so on. It combines this with classic Call of Duty character classification, weapons and gear mods, and most importantly, some of the most iconic CoD maps. This, it further combines, with gameplay mechanics that focus on the realism of elements such as closeness to bullets and gun recoil, along with new age technologies such as augmented reality crosshair scope, and the added control of drone strikes at your disposal. What I basically mean is, there is a lot for you to explore, win and own in what is a seemingly straightforward shooter. 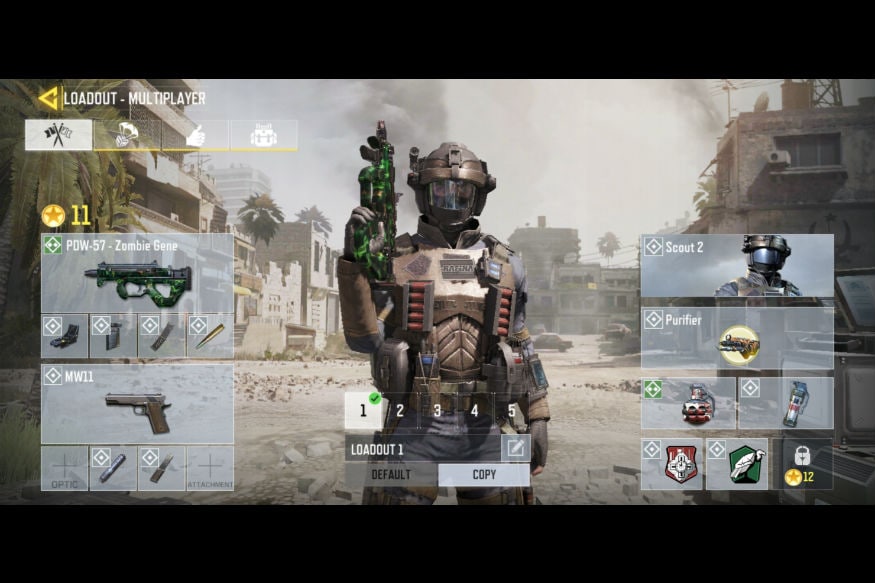 This is your makeup parl... er, suit-up zone, in the game. (Image: Activision/News18.com)

With multiplayer, 5v5 team deathmatches are at the smack dab centre of the gameplay. What makes this ridiculously fun is that everything here is fast paced — an average team match lasts for about seven minutes, so you’re not dawdling at any moment. The objective is simple — be the first to register 50 kills of your opponent team, and you win. As rewards, you get progressive weapon upgrades, ancillary abilities such as frag grenades and smoke bombs, cosmetic upgrades (the abnormality camo looks roguish cool!), and most importantly, levelling up to unlock special weapons such as the Purifier — the flame-seething slow killer from Black Ops III.

The speed of the gameplay means you respawn almost immediately after you die, jumping right back into the game. Interestingly, dying in multiplayer can also work as a strategic element, if you’re too far away from picking up ammo from your kills, and you don’t have any left. Given the ease of ammo availability, Call of Duty: Mobile pays special importance to picking a weapon that has high accuracy, which is what makes the M4 a great starter gun. In fact, it can even be sufficient until about level 8. Plug in a high accuracy scope and a mobility upgrade to maintain pace with scope view enabled, to get a great chance at winning more multiplayer matches. 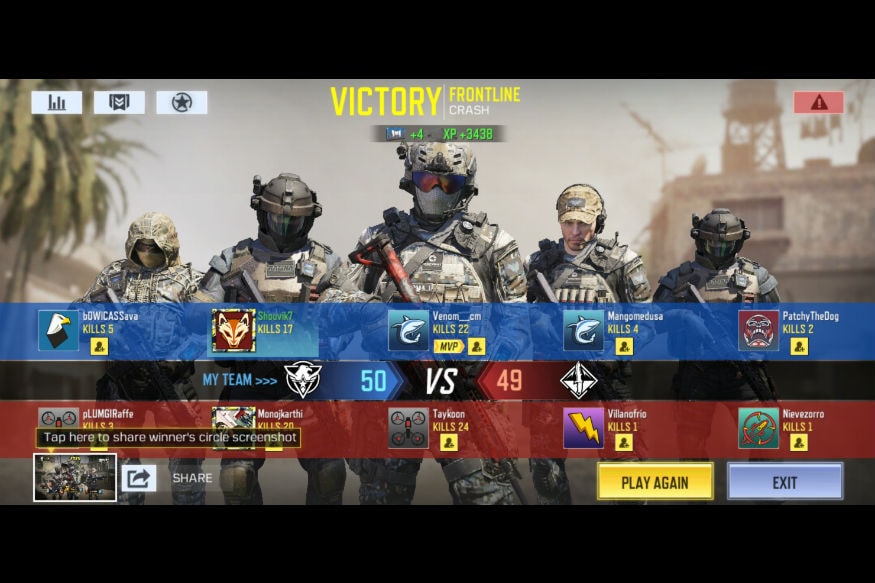 Thanks to the pace, some matches are of such intensity that nail-biting, 50-49 finishes became a regular incident, after you reach about level 9. You will get MVP finishes more frequently before that, as the game pairs you with a mix of easier opponents and amateur bots to push you into the game. Once this phase is over, we found ourselves ending second on most of the kills rosters. To accompany the gunfight, you have Scorestreaks — the UAV route. It is crazy satisfying to engage long-range killer or short-range hunter drones when your team is lagging behind on the kills count. Then, there are the arenas, which anyone that has played Call of Duty would expect to be great. If you play enough, you’ll soon discover back routes, strategic pit points and great sniping zones, which can come in handy and let you melee charge on opponents more often.

All of these factors combined make this game feel a cut above most others. The graphics are top notch, although you will need a top-end smartphone to make use of it. With easy enough controls, a direct but mature gameplay, and thankfully good server hold-up handling the initial load of players across the world, Call of Duty: Mobile feels like a game that we would play well beyond the initial days. If for nothing, we’d certainly keep coming back to our clans in multiplayer, with more new guns to muster. 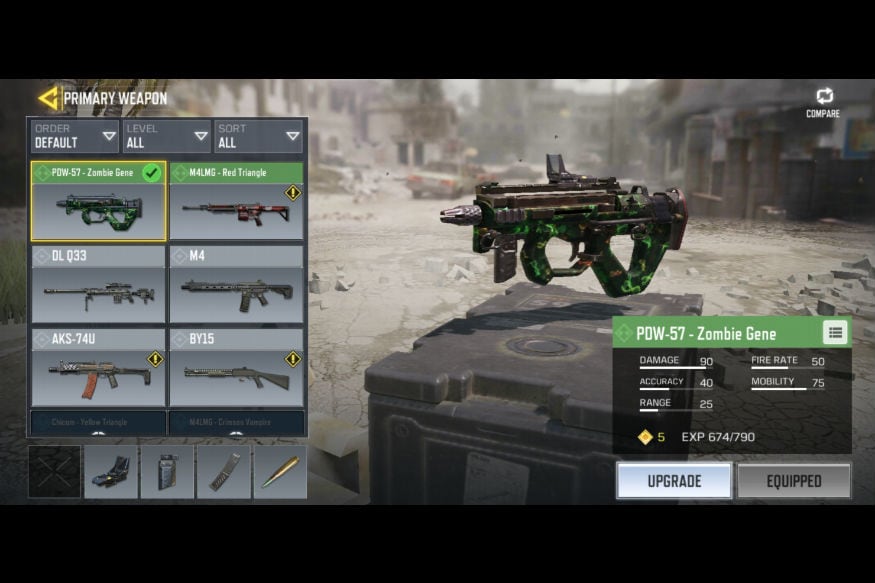 Despite lower accuracy, the PDW-57 is great fun to play with. (Image: Activision/News18.com)

While there’s no erasing PUBG Mobile, from battle royale folklore, Call of Duty: Mobile might just be ready to strike the second coming of an all new battle royale fad — one where AAA titles adapt to the mobile battle royale genre. Before we proceed here, I would admit that I’ve not been a major fan of battle royale games, and the addictive nature of it wore off after a few initial bouts of playing PUBG with my friends. 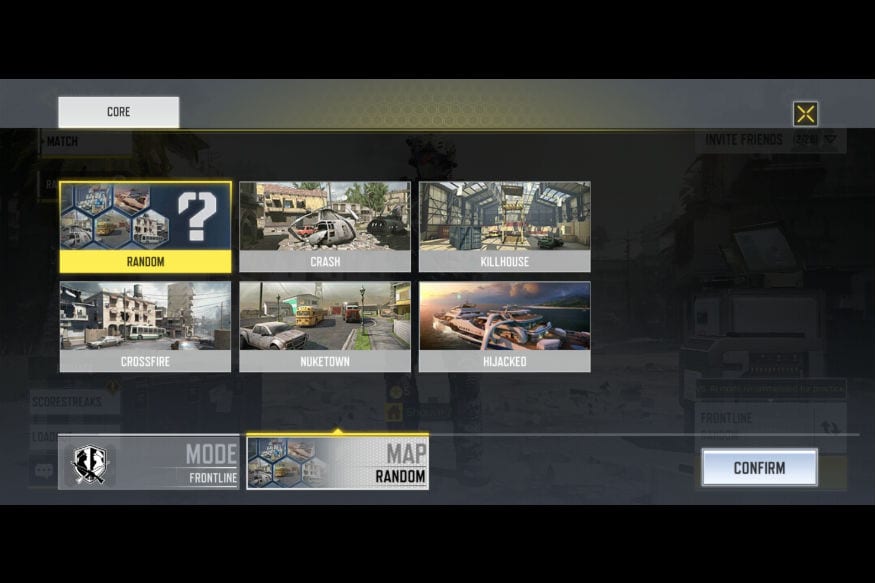 Some of the iconic CoD maps have made it to the mobile game as well. (Image: Activision/News18.com)

However, with a whole lotta CoD talk added to the otherwise survivalist chatter, I realised that even battle royale can be fun here. Sure, the principles remain the same, and just like before, coordination among the randomly grouped teammates was hilarious (everyone went their own way), but you now have the added flair of dealing with zombies, guns with eccentric paint, and cleverly designed maps that can offer you a lot of strategic standpoints such as high holding grounds. That said, it doesn’t let you dwell at a point even if you steer clear of human opponents, for the zombie hordes might just crawl up on you.

With its own characteristics, Call of Duty: Mobile makes battle royale feel more than a survival-based cover-and-shoot game mode. There are a few things that seem more like overlooks from the dev team than shortcomings — items on the map (vans, for instance) that are inexplicably non-interactive, and paths on open fields that are inaccessible. It may very well have been one of the expected opening-week glitches, but apart from these, if PUBG has been your calling, Call of Duty: Mobile’s battle royale mode will be something that you will absolutely love. 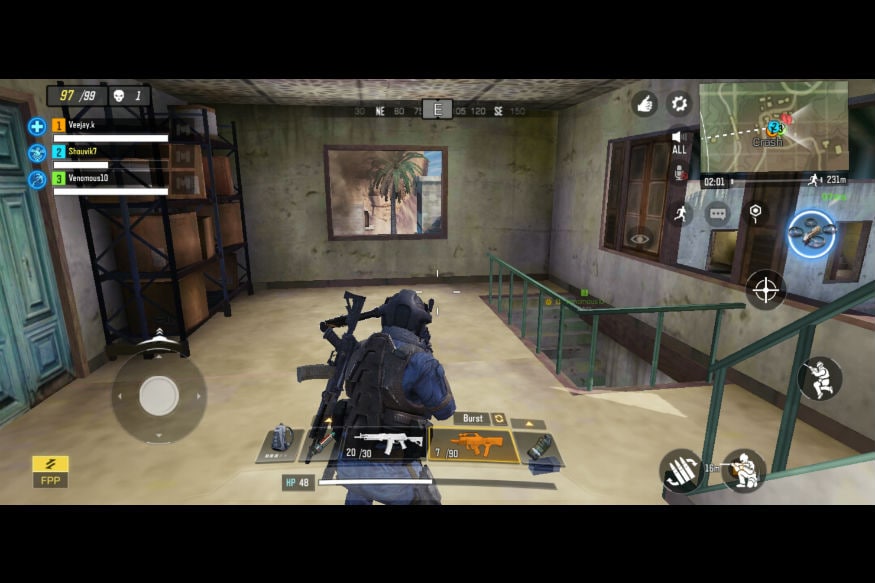 Battle royale holds its own flavour, but with an all new character now. (Image: Activision/News18.com)

There are no two ways about it — Call of Duty: Mobile is, hands down, the game to play right now. Even if you don’t have an in-game clan, the multiplayer mode has plenty of players for you to match up with. The game has so far matched me mostly with fellow players from India as both teammates and opponents, although we haven’t managed to independently verify whether this is intentional geolocking from Activision and Tencent. The makers do try to sell you the premium pass and the special crates, but the pop-ups appear only at the start, and aren’t all that intrusive. While you would get a leg up with these items, it’s not too tedious to level up without them, which makes Call of Duty: Mobile win extra points from us.

Apart from the fact that Tencent help build both, Call of Duty: Mobile might just be the sudden, unexpected headshot that PUBG would not have seen coming. It takes the best of many worlds from within the Call of Duty universe, and puts it where the money is nowadays — viral, massive open world gaming, tied together by the nostalgia of classic maps. Unless it gets rattled by some major issue at any point, Call of Duty: Mobile is a win, for players and makers alike. 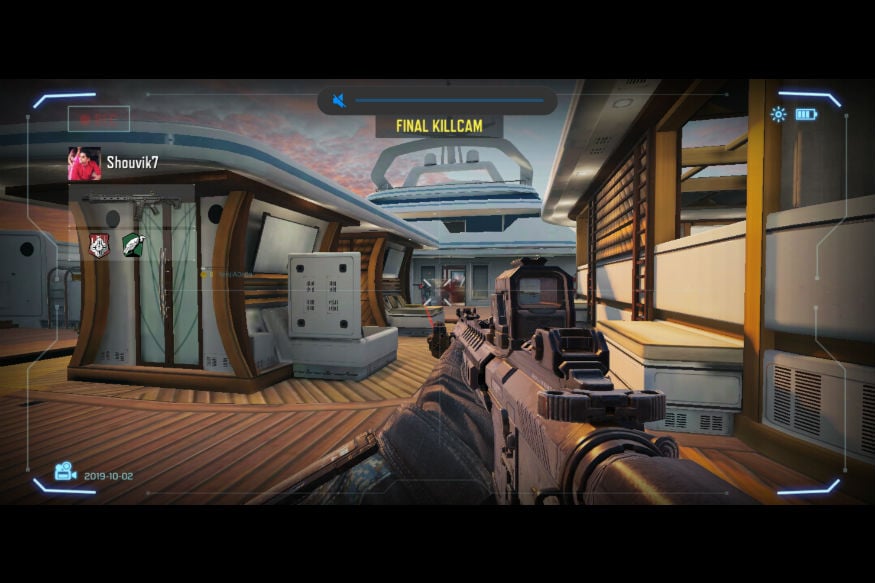