Cyberpunk 2077 First Impressions: A Haunting, Intriguing Dystopia Despite the Glitches

The world of Cyberpunk 2077 is expansive, haunting, racy and dystopian, one that entices you and keeps you hooked for long hours. Unfortunately, glitches galore can drive you up the wall all along the gameplay.

Cyberpunk 2077 had a lot riding on it for years. For one, it’s been hyped up all these years, through one delay after the other. Two, CD Projekt Red has a tall standard to live up to, after it aced the charts with the world it created in The Witcher series. Naturally, ever since its official launch on December 10, Cyberpunk 2077 has been at the top of conversations among gamers, analysts, publishers, journalists, distributors and even the general audience who like to stay in touch with the gaming world. After about three hours of playing Cyberpunk 2077, its appeal is very apparent to me — it is a world that I would want to lose myself in.

But, there are issues at hand, too. For one, Cyberpunk 2077 has been delayed so many times, that any person with intent of playing the game would have expected CD Projekt Red to come up with a game that, at least, keeps away the sort of irritable bugs and glitches that can ruin a game’s overall experience beyond limits. That’s exactly what has gone wrong with Cyberpunk 2077, and after a three-hour gaming marathon today, I have to admit that this experience would be far, far better if the developers succeeded in keeping the game clean.

Glitches and one strange decision

The bugs are so bad that instead of starting by talking about the gameplay, I’m starting with the number of bugs that I’ve encountered so far. Right from the onset, our protagonist V’s legs started disappearing and reappearing at will. We’ll talk about the camera angle later, but it is certainly a very weird experience to look down and see yourself without a body. Just a floating head with an augmented head-up display built into your eyes. Look into the mirror somewhere, and you instantly see yourself — all body parts intact. 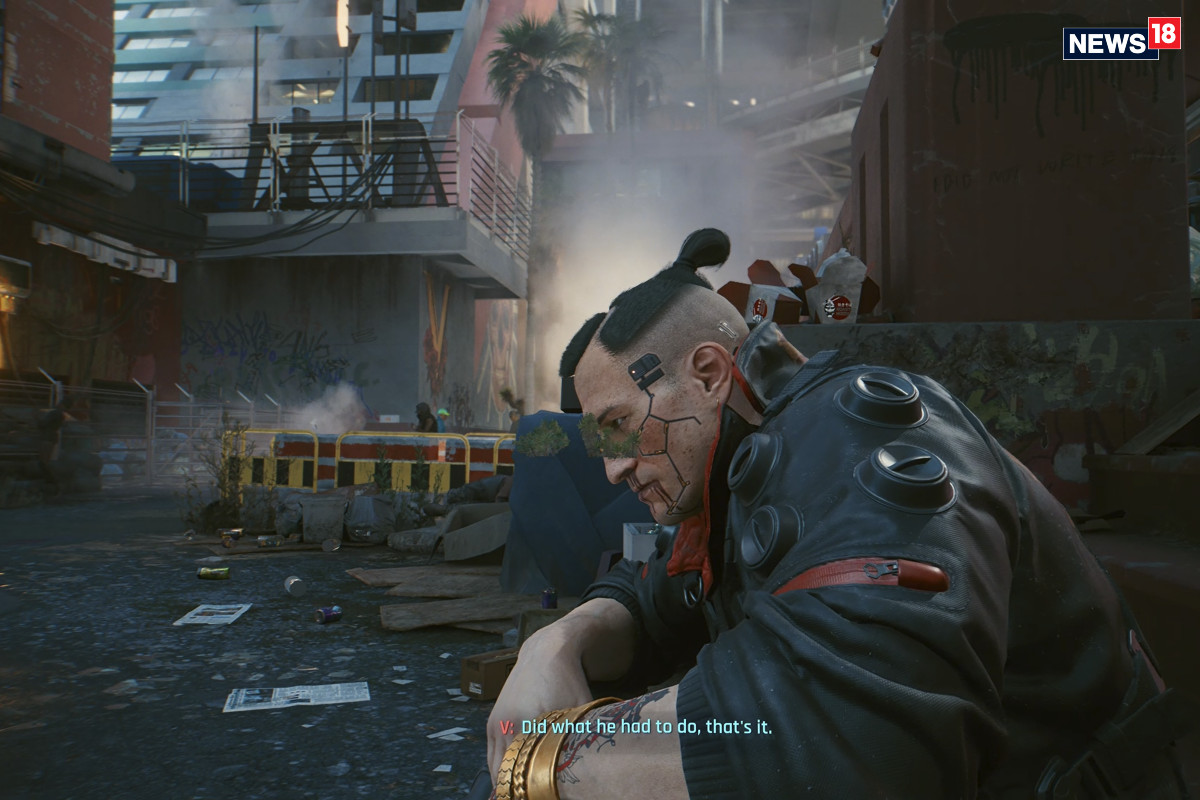 In one of the prologue levels, the game got me stuck at a point where even after making the final decision and playing out a mission, it simply reverted me back to the starting point, making me start the mission all over again. It moved on only after I cleared the same mission three times. While missing legs and floating beards (yes, that happens too) are still things that you may be willing to overlook, having to replay a mission three times just to proceed with the storyline can be a frustrating experience, indeed.

Truth be told, I would have been happy to overlook minor graphical glitches like floating beards and all, but when glitches start affecting the core gameplay, that’s when you wish the developers had really ironed these things out before publishing the game. Surely, someone at CDPR must have noticed these? Apart from when you’re driving, you can only play Cyberpunk 2077 in the first person. (Image: Shouvik Das/News18.com/CD Projekt Red)

Beyond glitches, though, I have one major complaint — Cyberpunk 2077 has a fascinating gameplay experience, and I always prefer getting the overall experience and storyline of the game without losing myself in too many nitty-gritties of combat. The best way to experience that, I feel, is in the third-person camera view, which is not to be found in Cyberpunk 2077. It is available when you’re inside a car and driving, but not when you’re on foot and in combat. You’re stuck forever with a first-person camera view — something that took me many minutes of scrolling through the game’s unnecessarily complicated camera menus and reading up on forums to confirm.

This decision seems strange — I understand that the makers of Cyberpunk 2077 visualise the game as best experience in the first person view, but why not at least give gamers the option to choose the third-person camera view, should that be what they prefer? Given the flexibility of the world of Cyberpunk 2077, I’m inclined to hope that CDPR would some day push an update that enables third party camera view. That, though, does not seem to be a priority right now. CDPR is focusing on fixing the bugs and glitches in the game, and rightfully so. But camera angles can form a major part of how you experience a particular game, and Cyberpunk 2077 is missing out by not allowing third-person view in the game.

Now, let’s talk about the game

Look beyond these glitches, though, and Cyberpunk 2077 is a game that you’d really, really want to keep playing. You start as V, a character in Night City that right from the onset gives a vibe of futuristic, dystopian anarchy. CDPR lets you literally configure your character down to the last detail, including choosing your character’s voice (male or female) and genitals irrespective of the gender that you’ve picked. The essential idea fits well with the cyberpunk genre, and the Cyberpunk game itself — Night City is largely a society of outcasts, and you can have your character fit into it exactly the way you want it. Marking the start of a key relation in the game. (Image: Shouvik Das/News18.com/CD Projekt Red)

Thankfully, though, the choice of your character’s gender or genitals will not affect the missions and the core gameplay, or from what journalists across the world have said, even the ending. Sure, there will be multiple endings to the game, but most of it will differ based on the choices that you make along the way — and not who or what your character is.

Through the game, you go about picking one mission after another, including optional side quests that are not merely ancillary. They can add to what you do in the main storyline, the path you follow and essentially set up the ending that you would find in the game. You begin by picking one of the three character lives — Nomad, Street Kid and Corpo. Each character type you choose will differ the starting setup, the key gameplay dialogues, the overall storyline and the subsequent ending. All of this is tied together in Night City — a hinterland that serves as both your place of origin and your hunting ground. You pick any of the three lifestyles in the game, which defines everything else that follows. (Image: Shouvik Das/News18.com/CD Projekt Red)

The game does superbly well in giving you the twists that you’d expect in such a world. Nobody is as straight as they sound like, and no mission goes as simply as following along a set line and saving a target, or eliminating some. Throughout the game, you’re posed with questions and choices — to some of these, you have the freedom to think and answer; to others, your responses have to be spontaneous. I particularly like this, since it keeps the pace of the game going. It is in line with the world the Cyberpunk 2077 has created — do or die, prevail or perish, succeed or succumb, whichever way you’d like to see it.

Admittedly, we are still quite far away from the ending, having only put in about three hours into the game. However, what I also like is that this does not feel like a game that feels like there’s an overwhelming lot to do, which can put casual gamers off. This is a tricky bit of achievement that CDPR has done right, for in Cyberpunk 2077, there actually is an overwhelming lot to do. The open world of Night City means that the more side quests you do, the more you get to learn and get roped into the intricate world of the game. You find more about the characters around you, as you proceed with the eventual goal.

Even in the first mission of the game, you get a clear sense of just how expansive Cyberpunk 2077 is. As you go about taking the enemies down, be it by stealth or headshots, you’ll keep finding collectibles on the way. These would include new weapons, ammo and other collectibles. In the eventual journey, you will be able to sell some of these items, too. As you close the first mission, you also win Street Cred, which is going to help you progress in the next levels. You will also tend to start enjoying the storyline as you progress with the gameplay, as you learn more about new friendships, go through experiences that include ‘jacking a car to help a friend, and so on.

Should you buy/play it? Absolutely!

After the first few hours of playing Cyberpunk 2077, I can state with certainty that Cyberpunk 2077 can very well be one of the best games around. It’s too early to state whether Cyberpunk 2077 will enjoy the same kind of fame and universal playability as The Witcher series or GTA — a gold standard of open world gameplay where belligerent characters run wild and do what it takes to thrive. But there is a very good chance that it can grow into a cult favourite. There is way too much to explore in the game. Each mission and each corner of Night City looks like they are filled with dark, unexplored stories, secret missions being played out in the underground, and like it or not, you’re a part of this world, too.

The game, then, is on you, and what you can or will do to make it your own. While our full review of Cyberpunk 2077 will be out soon, be rest assured that this is a game that’s certainly worth spending your time on. Don’t let reports of the innumerable bugs stop you from experiencing it, for bugs, I’m sure, will be eventually fixed.