Dell G5 15 SE Review: You Really Are Better Off Spending Your Money On An HP Omen 15 Gaming Laptop

For all of AMD’s good work with the Ryzen 7 under the hood, there are fundamental issues with the Dell G5 15 SE gaming laptop on the design and specifications front that somewhat restricts the experience. Just 8GB RAM, not enough cooling vents and the fact that this laptop becomes really hot after just a while really hurts usability.

The Dell G5 15 SE gaming laptop, the Dell G5 5505, that we are reviewing here has a box price of Rs 1,50,212. For some reason, Dell seems to be very shy about listing the product prices, particularly for its premium laptops, on the website—it is the same for the new Dell XPS 13 laptop, for instance. I am not exactly sure how many people would take the pains of calling a toll-free number, part with their contact details just to get the official price list. Dell does tell us the pricing of the G5 15 SE gaming laptops starts at Rs 74,990. Below is also a screen grab from the Dell website. Nevertheless, I am no marketing or consumer behavior expert, and I shall get back to the tech side of things. This Dell G5 15 SE laptop is powered by the AMD Ryzen 7 4800H processor with the Radeon RX 5600M graphics, 8GB RAM and 512GB SSD. 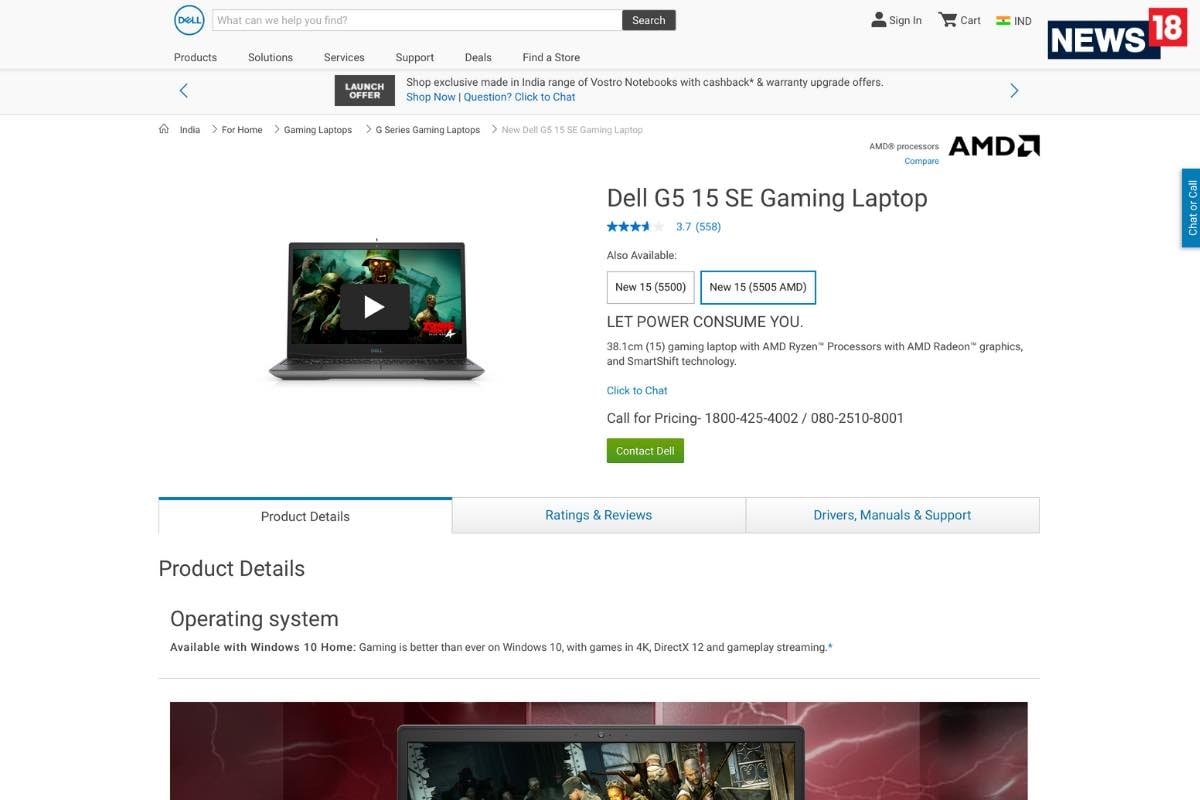 Competition Check Is More Important Than Ever

This goes into competition against the 10th generation Intel Core processor powered HP Omen 15 gaming laptops as well as the AMD Ryzen 5 powered variant, with the range pricing starting at Rs 75,999. The Intel Core i7 variants start at Rs 1,00,999 and even the Rs 1,20,999 variant has 16GB RAM instead of 8GB. If we are to look at the like for like comparison as far as the prices are concerned, the HP Omen 15-ek0022tk which is currently retailing for around Rs 1,55,999 comes with the Intel Core i7 processor, Nvidia GeForce RTX 2070 with Max-Q (8GB), 16GB RAM and a 1TB SSD. 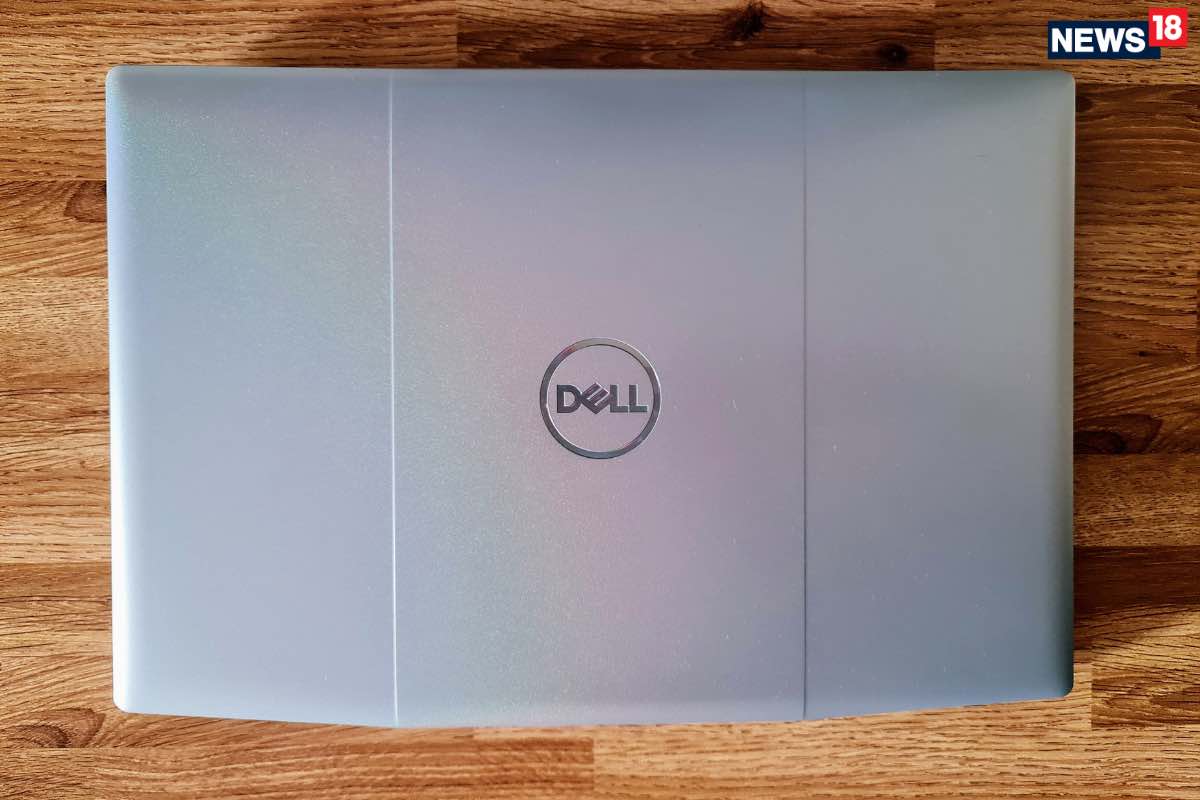 Design: This Does Not Look Like A Gaming Laptop

From the first glance till the last, the Dell G5 15 SE gaming laptop remained decisively underwhelming as far as the looks are concerned. Not just because it doesn’t have the sort of aggressive and bright personality that is part and parcel of gaming laptops, albeit it does have some colorful LED treatment along the way, this is one gaming laptop that actually doesn’t look pretty. You may see a photo on the Dell website and imagine it is quite thin, but in reality, it isn’t. This is actually 21.6mm thick, which is basically three Apple iPhone 11 Pro Max stacked one on top of the other. Dell’s own India website refuses to mention the weight of the Dell G5 15 SE gaming laptop, but I imagine it isn’t exactly the lightest of the beasts out there. Weight, however, isn’t really the most important aspect on the spec sheet for those looking to buy a gaming laptop.

The colour is called Supernova Silver, and after having just reviewed some really pretty laptops in the past few weeks, I have to say that the likes of the Lenovo Legion 7i look much better in the metal and plastic and carbon fiber and all that. The Dell G5 15 SE gaming laptop, I really don’t have any other way of saying this, looks plain boring. Open the lid and the matte black keyboard deck isn’t offensive the least bit. Yet, it is too simple for a gaming laptop that most likely wants to appeal to a younger audience. In fact, this look is very similar to how Dell Inspiron laptops looked like till a few years ago—don’t know what the latest gen is like, haven’t experienced that.

All that criticism about bland looks aside, the Dell G5 15 SE gaming laptop doesn’t really have any drawbacks as far as the ergonomics and the practicality is concerned. It is a plastic build but one that doesn’t really feel bad. It has that ever so slightly shiny enamel sort of finish, but that’s just something too minor to have an opinion on. There are ports on either side spine—and there are lot of connectivity options, mind you. The display has a nice hinge design positioned in the center with angular spines meeting the keyboard deck. 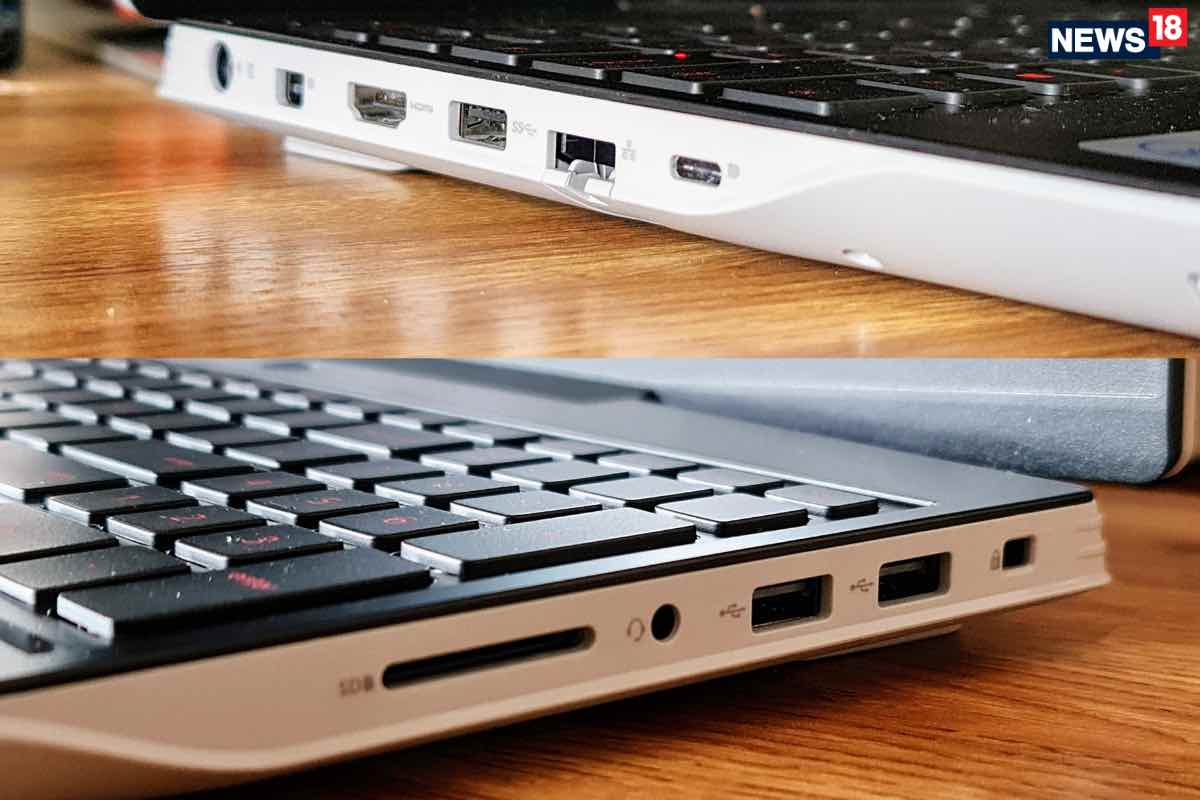 Performance: It is Hot. Rather, It Gets Hot. Potentially Skin Burning Hot

This is where things get interesting. The variant that we have tested here is powered by the AMD Ryzen 7 4800H processor with the Radeon RX 5600M (6GB) graphics. To be honest, I was quite excited about the Ryzen 7 and what sort of performance it offers compared with the 10th generation Intel chips. The results are impressive, as far as the raw processor performance and graphics are concerned. The processor keeps things moving along at pretty impressive speeds, and to be honest, this matches the sort of real-world performance that I have seen on some Intel Core i9 powered Windows 10 machines—and those cost a lot more, mind you. On the face of it, this is also effortlessly matching the Nvidia GeForce 1060Ti graphics in the HP Omen 15, and also feels at par with the Intel Core i7-10750H processor. Similar sort of gaming settings, particularly for F1 2019 and Forza Horizon 4 without having to dial down the effects—and no dropped frames or stutters. Yet, the Radeon RX 5600M will be able to push much higher, close to the Nvidia Geforce RTX 2070 (8GB RAM) range, as far as its own capabilities are concerned.

However, Dell has given this a bit of a handicap with just 8GB of RAM on board. It is a bit perplexing that Dell wants you to buy a gaming laptop that has a box price of Rs 1,50,212. The HP Omen 15, for instance, offers 16GB RAM from variants priced Rs 1,20,999 onwards. I was unable to run F1 2020 on this machine, for instance, and in general you will not have the best possible gaming experience with half the RAM in the Dell G5 15 SE gaming laptop as compared with the HP Omen 15.

Yes this has a fast 512GB SSD and it has a bunch of AMD functionality to improve performance, but the RAM section on the spec sheet is a turn off and that’s how it proves to be in the real world as well. The AMD SmartShift technology works in the background to manage the task allocation between the processor and the graphics to keep the performance stable while gaming. This, from what I understand, remains active and there is no way to turn this off. Not that you would want to either. There is more too. The new AMD Radeon Software app gives you the options for Radeon Anti-Lag which reduces input lag in case you notice there is a delay in the input from the keyboard or controller and what you see on the screen. Then there is Radeon Chill that alters the frame rates when the system detects the user isn’t giving any inputs and picks that up again when the action starts. There is also Radeon Image Sharpening that upscales lower resolution visuals in a game to match the higher resolution screens. There are more options too, and this just shows the details that AMD has gone into, to make this software easy to navigate and the settings simple enough to understand and enable or disable. Mind you, this lets you pick settings individually for the integrated graphics and the dedicated Radeon RX 5600M GPU. 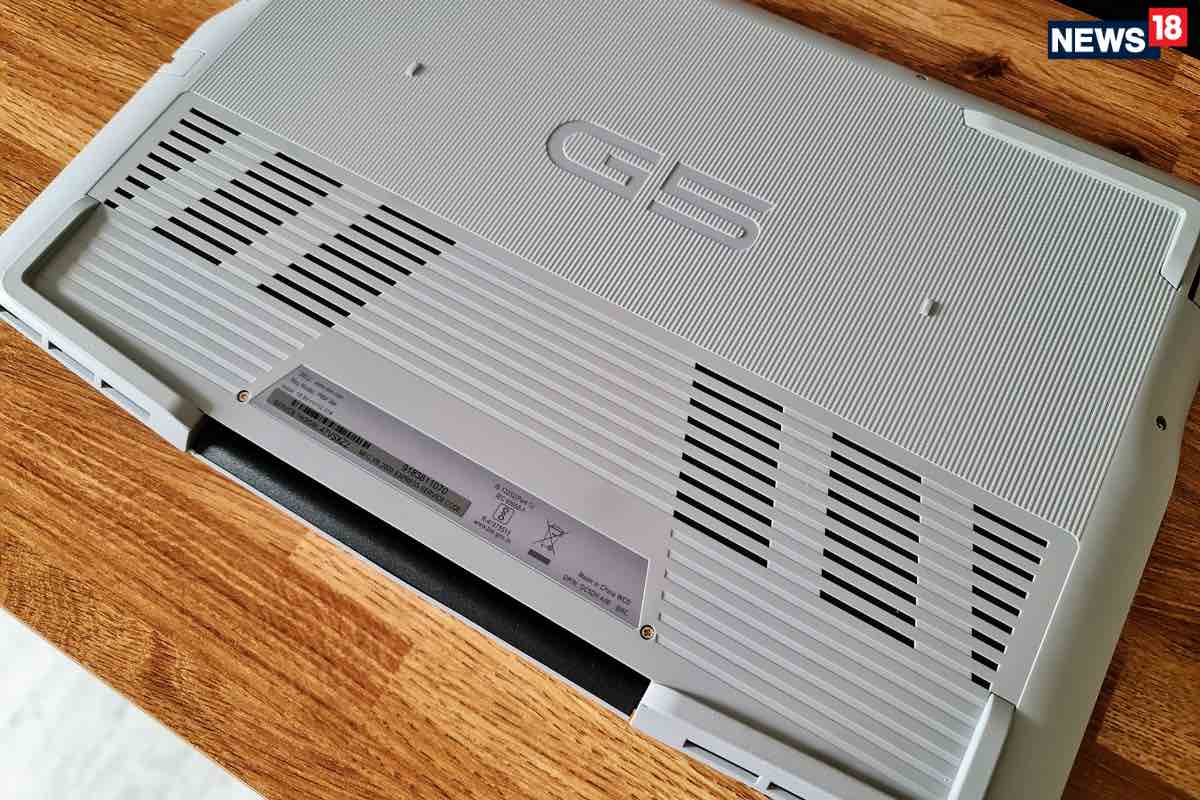 Battery: Do Not Expect Much From It
Battery life isn’t anything to write home about either. The Dell G5 15 SE gaming laptop, full charge to full discharge and used purely for web browsing, watching videos and document editing, lasted about 3.5 hours. The rising temperatures are never the best recipe for good battery life, and that surely is one of the primary reasons driving the battery drain. You will need to lug that massive brick of an adapter along, whenever you decide to travel with this.

Display: Middling Display Which Does The Job

The 15.6-inch display is Full HD as far as the resolution is concerned. Depending on which variant you pick, you can choose between a 60Hz and 144Hz refresh rate display. For gaming and also for basic computing tasks, the sharpness, colour and the overall visibility are quite acceptable. However, I do feel that this is a decidedly mid-range gaming laptop display that isn’t as bright as you’d probably want it to be with certain games. In fact, the Lenovo Legion and the HP Omen laptops, both in their latest gen avatars, do have displays which are brighter and more immersive. This does have good response times though and there was no visible tearing of visuals.

It is a bit weird that as we close in on the year 2020 (many would be happy to see the back of this year, mind you), Dell is offering a pretty expensive laptop with Wi-Fi 802.11ac as standard and the Wi-Fi 6 AX1650 is an optional add-on. The Last Word: Absolutely No Way We Can Recommend This Over The HP Omen

For all of AMD’s good work with the Ryzen 7 under the hood, there are fundamental issues with the Dell G5 15 SE gaming laptop on the design and specifications front that somewhat restricts the experience. This could have been a dream combination, with the AMD Ryzen 7 showing off its might, the Radeon RX 5600M graphics getting a chance to flex its muscles and you could have had a fantastic gaming laptop on your desk. As it turns out, that isn’t going to happen. It is not AMD’s fault that the limitations lie elsewhere. And those are significant limitations. The Dell G5 15 SE gaming laptop is a hot laptop for sure, unfortunately not in the cooler sense of the word.