A screenshot of Ovleno Business Intelligence (OBI) website when it was live.

Himanshu Sharma, Ovleno Business Intelligence director and vice president of SCL India, has updated his LinkedIn profile to omit any references of him "successfully managing election campaigns for the BJP".

New Delhi: After the website of Ovleno Business Intelligence (OBI) was suspended, its director Himanshu Sharma has updated his LinkedIn profile to omit any references of him "successfully managing election campaigns for the BJP".

This comes after the Congress, in media reports, claimed that the BJP had used the services of Cambridge Analytica (via OBI) and showed the public LinkedIn profile of Sharma. OBI is the Indian arm of Cambridge Analytica, the firm that is at the centre of the row over illegal mining of Facebook data to influence elections. 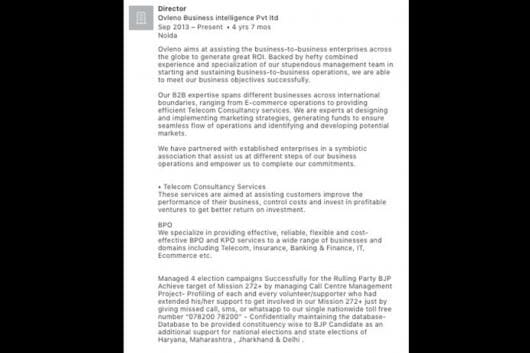 A screenshot of OBI director Himanshu Sharma's LinkedIN profile before the Facebook data breach was revealed.

Sharma had earlier mentioned in his LinkedIn page that he had managed four election campaigns successfully for the ruling party BJP. His profile earlier read, “Achieved target of Mission 272+ by managing Call Centre Management Project- profiling of each and every volunteer/ supporter who had extended his/her support to get involved in our Mission 272+ just by giving missed call, sms or whatsapp to our single nationwide toll free number “07820078200”. Confidentially maintaining the database- Database to be provided constituency wise to BJP Candidate as an additional support for national elections and state elections of Haryana, Maharashtra, Jharkhand and Delhi.”

According to a press release issued back on February 2014, this toll free number was launched as the 'NamoNumber initiative as a part of India272+, the Volunteering Portal for BJP's Campaign for the general elections of 2014.

“Shri Modi launched the initiative by SMSing his Voter ID Number (also known as EPIC number) to 7820078200. This is the key message and call to action of NamoNumber, which asks all Narendra Modi supporters to SMS their voter ID to 7820078200,” according to the press release.

The official press release explaining the functioning of NamoNumber:

"The unique tool (http://namonumber.india272.com) is a path-breaking technology that helps to map all BJP supporters based on their voter card ID number and also gives each supporter an opportunity to further mobilise supporters by asking them to do the same. The NamoNumber campaign aims to empower voters by letting them state their support and become more integrated with the larger cause of helping Shri Narendra Modi to become the Prime Minister. As the general election approaches, the NamoNumber will also help ground volunteers to ensure the true support base of BJP and Shri Modi turns up in huge numbers to cast their vote on election day."

"The NamoNumber also has an interesting gaming feature similar to that of a Multi-level Marketing exercise. It allows volunteers garner voter ID numbers of their friends and families to keep a track of their efforts. For the first time it allows them to objectively measure the support they have helped to get for the campaign, this helps to motivate volunteers and integrate them to the larger campaign goals." Read more about the NaMo Number Multi-level Marketing exercise here

So, what is the problem with BJP, Congress being clients of OBI or SCL India?

As per the current law, political parties should show the social media campaign expenses as part of part of a sworn affidavit that is required after every election. However, it is now unclear as to which parties were following this protocol.

"As far as the question of political parties' payment to data companies is concerned it should indeed be declared properly in the sworn affidavits but there is no proper authority to implement it," Jagdeep Chhokar, the head of the Association for Democratic Reforms (ADR) told BBC.