Lenovo introduced its much-awaited Vibe K5 Note along with an upgraded Vibe K5 Plus at an event today in India. The Vibe K5 Note is priced at Rs 11,999 onwards. Image: News18

The Vibe K5 Note is claimed by Lenovo as its 'best looking phone ever', but is it?

After the launch of Vibe K4 Note earlier this year, Lenovo has launched its successor - the Vibe K5 Note – at a price of Rs 11,999. Based on the little time we got to play around with the budget smartphone, here’s what we have to say.

Claimed by Lenovo as its ‘best looking phone ever’, the Vibe K5 Note does impress with the smooth metal design and curved edges. It comes with a 5.5-inch FHD display and a metal body that's slippery. However, that doesn’t downplay on the overall appearance of the phone. It sports thin side bezels giving an illusion of an edge-to-edge display.

The rear has a balanced and symmetric design with the camera and fingerprint sensor perfectly aligned that gives it a clean look. The ‘Vibe’ logo sits in the middle while the lower back has a design that is aimed at enhancing the audio experience of the Dolby Atmos enabled speakers even if one puts the device flat on a surface. In terms of camera, it features a 13 megapixel rear camera sensor with dual-tone flash along with an 8 megapixel front camera. There are customisation options available along with some filters to help you get the picture right. Results in bright lit, indoor conditions are decent.

One of the subtle tweaks that this Android Marshmallow powered phone has been given is the ability to pinch and zoom on the content displayed on screen. For example, if there is a certain detail within a text you want to zoom onto but don’t want to change the overall font size, you can do so by simply pinching it out, similar to zooming onto photos.

Another highlight of this affordable smartphone is Lenovo’s Secure Zone. The feature, as Lenovo puts it, allows one to use two accounts on the same phone, including running two instances of apps such as WhatsApp.

The phone is powered by a 64 -Bit, Octa Core 1.8 GHz Mediatek 6755 Processor and available in two RAM choices. It further draws its juice from a 3500mAh battery. However, how well does it function during a regular usage is yet to be explored. 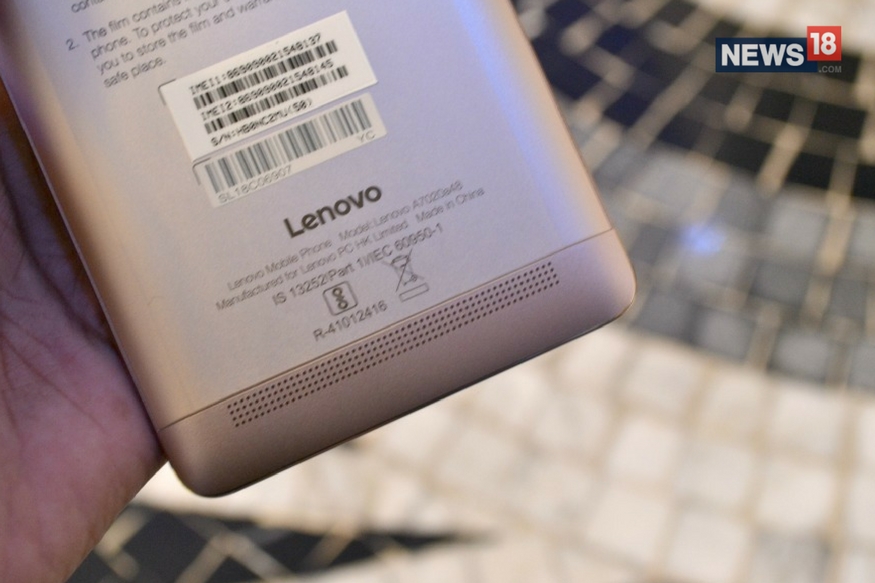 The Lenovo Vibe K5 Note comes with Dolby Atmos speakers which are further enhanced with the phone's curved design. It comes with Lenovo's TheaterMax technology and hence, it is compatible with the AntVR headset. Image: News18

The phone lets you pump up its 32 GB internal storage up to 128 GB but because it features a hybrid slot, it can either house a second SIM or the microSD card.

The Lenovo Vibe K5 Note comes with the company’s TheatreMax technology that basically makes the device VR friendly. Lenovo is offering a separate Evo Pad 2 precision controller by Amkette for a better experience for VR gamers.

At Rs 13,499 (for the 4GB RAM variant), Lenovo’s Vibe K5 Note is competing with the hottest phones around in the same category including the LeEco Le2, Xiaomi Redmi Note 3, and the Moto G4 Plus. While it scores a high in terms of design and also boasts of support for VR technology, it is yet to be seen how well it fairs during a prolonged usage.