Fujifilm X-A7 Review: Good Beginner’s Camera for Performance, But Not Easy to Use

The Fujifilm X-A7 clearly has its strengths, and is squarely aimed at beginners and vloggers; but, the end result makes it a tricky one to recommend.

Fujifilm’s X-A lineup is squarely targeted at first-time users of interchangeable lens cameras, or should we say, “serious” cameras. While this has been quite clear, Fujifilm’s previous attempt with the X-A5 was extensively criticised for being half-hearted. In September last year, we reported that the Fujifilm X-A7 would be making its way to India by the end of the year, and true to our (and Fujifilm’s) word, the X-A7 showed up in India as an APS-C sensor-equipped camera squarely targeting the millennial, the video blogger and the first-time camera user that is way too used to the smartphone interface.

I’m fairly convinced that what Fujifilm has attempted with the X-A7 is the right way to go for camera layouts and interfaces. Given how accustomed we are with smartphones today, there is clear value in reformatting a camera’s interface and button layout to make them work similar to a smartphone’s UI. It is for this reason that the Fujifilm X-A7 packs a massive touchscreen that takes up pretty much all of the rear. There are barely any buttons — four, to be precise (without counting the joystick), and almost everything is packed into the screen. That, however, does not mean that the X-A7 has nailed it.

With that in mind, would you be happy with the Fujifilm X-A7? Is this the right camera to begin your journey into the world of photography and videography, or does it make more compromises than what is warranted? If you are eyeing a camera priced within the Rs 50,000 price point, this is what you need to know.

While we typically begin our camera reviews by talking about the image quality, this one warrants a different approach. The Fujifilm X-A7 has a rather puny body, but that’s not unexpected from Fujifilm. I’d used the excellent Fujifilm X-E3 for quite a long duration back in 2017, and the general design language brought back fond, familiar memories. However, instead of eight buttons, one toggle and a five-way joystick at the rear, the X-A7 only features four buttons towards the rear. The rest of the space is taken up by a very responsive and generally brilliant, 3.5-inch touchscreen display.

In terms of ergonomics, this more or less works well. The two buttons to the side give you access to the Menu, and help toggle picture information on the live view display. The two buttons to the top open the photo gallery, and give you access to the shooting modes, from which you can choose HDR, continuous shooting, single shots, or videos. Also to the side of the viewfinder is an eight-way joystick that offers a steady, assured click feedback, making things easy to operate should you not like the touchscreen for some reason. 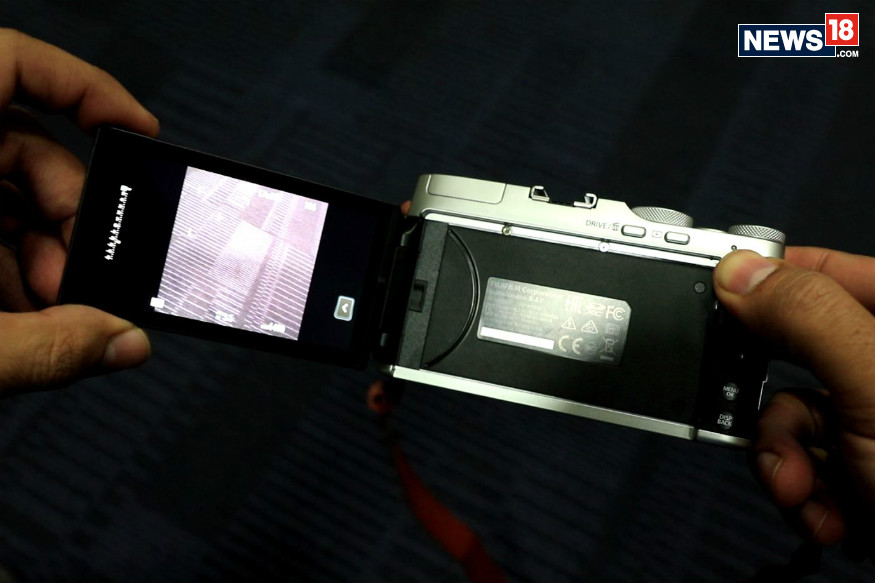 To the top, you get a pop-out flash (which I really wish was an EVF instead), a hot-shoe (thank the lord of senses for that), two toggles for shutter speed and aperture, two corresponding shutter buttons at the centre of these toggles for photo and video respectively, and a single mode toggle that lets you switch between various shooting modes — priorities, full manual, full auto and preset-based auto included.

Then, there’s the touchscreen itself. While touch response is superb, I’m not convinced about the interface just yet. For starters, accessing the quick menu, or Q, takes you between three screens. This is simply too long if all you want is a quick jab on the ISO scale, or a swift shift from Velvia to Astia simulation filters. To access this screen, you first tap on the tiny arrow icon to the bottom-right of the screen, which takes you to an intermediate settings screen. This screen lets you choose whether you want tap to shoot, tap to set focus, tap to set and lock focus, or no tap inputs while shooting. Other things you can do from here include a colour tone-based white balance adjustment (this seems a bit complicated for amateurs), the film simulation filters that Fujifilm evidently wants you to use more, focus modes (single-click autofocus, continuous autofocus and manual focus), quick adjust of photograph aspect ratio, and an exposure adjustment button masqueraded as what we know as ‘bokeh/portrait’ modes on smartphones. The rather confusing intermediate settings screen of the Fujifilm X-A7. (Photo: Prashant Rai/News18.com)

What would have been ideal here, and for first-time shooters, was if Fujifilm replaced the aspect ratio icon with ISO, the colour tone-based WB adjuster with a simpler, preset-based WB setting, and replace the exposure button with exposure compensation, or even dynamic range compensation. Not only would this have retained the typical camera interface, it would have also helped lay out more of the essentials within one tap from the touchscreen — thereby not making the user miss the physical buttons. The bad news here is that for now, you will be stuck with this layout, which can get rather annoying in the long run. The good news, on the other hand, is that this is a touchscreen interface, so if enough users lend feedback to Fujifilm, a firmware update should easily improve things in the future.

In terms of features, the electronic viewfinder is sorely missed. So is in-body stabilisation, a more sizeable handgrip, a larger buffer and a direct, 3.5mm audio port for earphones and microphone. The decision to use a balanced 2.5mm port seems thoughtful, but that would only suit pro shooters — a user group the X-A7 is not aimed at. As a result, this seems rather puzzling. Otherwise, the Fujifilm X-A7 aces the features list, with a new 24-megapixel APS-C camera, updated processor over its predecessor, 4K video recording at 30fps, and support for Fujifilm’s more extensive XF range of lenses as well. Add this with the excellent touch response of the camera’s touchscreen, and the X-A7 offers a strange mixed bags of pros and cons.

The only real issue here is that the overall layout of the camera is a bit… awkward. The design of the interface takes more time to get used to, than making things easier. Add a rather sub-par kit lens (the XC-mount 15-45mm f/3.5-5.6 with OIS) and its strange rings of servo ring and non-servo ring, and the biggest issue with the X-A7 is that in its quest to make the camera easier to use for the smartphone generation, it feels exactly the opposite. This is one of the most handsome entry-level cameras right now. (Photo: Prashant Rai/News18.com)

Get down to brass tacks, and you realise that the Fujifilm X-A7 is a reliable camera to move around with. Its diminutive stature is an added bonus for those who travel with overloaded backpacks, and the updated sensor, processor and autofocus module do seem to do the required job in terms of colour, dynamic range, white balance, details, saturation and noise.

In terms of overall performance, the Fujifilm X-A7 produces good, accurate colours in out of camera JPEGs. The standard picture setting is geared towards more neutral tones, which in turn produces a muted saturation level in most photographs. This is particularly evident in photographs with vivid colours. This, though, has its advantage too — since we are almost always used to adding filters and applying some levels of edit, it allows users to spike up the saturation to their preference, without disrupting the colour balance of a photograph. This is more useful in RAW, and gives users decent room to fiddle with photos. In addition, the colour tones are true to source, which retains the overall accuracy of the photographs. Dynamic range may not be among the best you’ve seen, but then, you would quickly realise that for an entry level APS-C mirrorless camera, the X-A7’s dynamic range performance is actually quite good. It either matches or outperforms most other cameras in this segment in terms of dynamic range, and this gives you decent room to adjust shadows against bright backgrounds, in order to salvage detail and colour shades from photos with varied lighting conditions.

This is further aided by reliable white balance performance in almost every condition, and pleasant colour temperatures prove how satisfyingly accurate white balance is. The level of details remain largely good in most JPEGs, and even RAW files processed show nice details in frames with very intricate subjects. The only point of compromise in terms of details come at higher ISO levels, although the coarse noise levels do retain more precise sharpness, and do not unnecessarily smoothen edges. The X-A7 does compromise on high ISO noise performance, but what’s impressive is the range that the camera offers — ISO performance goes all the way from 100 to 51,200 in JPEGs, and 200 to 12,800 in RAW. What’s more important to talk about, however, is the stand-out autofocus performance. In comparison to its predecessor, Fujifilm has stated that it has 8.5x more on-sensor autofocus pixels, translating to 425 overall autofocus points. This shows in the way the camera performs, and it truly excels in AF speed, accuracy and even AF tracking. It covers the entire frame, and locks focus and exposure in as easy a manoeuver as a single tap. The AF performance works great in almost all conditions, including very bright light and equally low light. The AF illuminator takes lesser time to operate and find the desired focus point than many other cameras I have used before, and this is what makes the Fujifilm X-A7 quite good to shoot with.

Unfortunately, the same cannot be said about its buffer size. The Fujifilm X-A7 really struggles with its limited buffer. As a result, continuous shooting at 6fps becomes a pain as the camera takes forever to shoot at the said 6fps. You can barely take consecutive burst shots as a result. In fact, even taking consecutive single shots become a pain, and in my experience, makes for the single biggest downside of the X-A7. Surprisingly, the buffer bothers you less when you are working with videos — even while shooting 4K videos at 30fps. Videography with the X-A7 actually quite impressive. The camera is a non-fussy shooter, and works fairly well in terms of high ISO, high exposure and high dynamic range videography. Saturation and level of detail is quite good, and for a vlogger-centric camera, makes for a good camera to shoot with. I preferred shooting at 1080p at 60fps instead of the oversampled 4K videos, by virtue of frame rate difference. This is actually a clear jump forward from the 4K videography at 15fps that the X-A7 was capable of, and is one that you can easily and happily use. The fully articulating live view display is an added bonus here.

All things considered, I’m inclined to really like the Fujifilm X-A7. It performs well, and that is the key strength of a camera. However, I find it difficult to recommend because of its peculiar ergonomics, which feels like a skewered attempt at a sharp concept. It also comes with a new generation USB-C port, hence making it easy to charge. We could shoot an average of 400 stills in one full charge cycle, which again is quite good. Add the Fujifilm film simulation modes to it, and you have a good camera in your hands.

But, its limited buffer size makes it a pain to shoot swiftly with. It also shows heating when used for long spans (even on a cool day outside), and while it does have Bluetooth and Wi-Fi, the interface makes it a very unusual and un-familiar experience. In the end, what happens is that even though I want to recommend it, the Fujifilm X-A7 has one too many eccentricities, that make it difficult to recommend over more straightforward ones from the houses of Sony and Canon.