Google Pixel Buds A-Series Review: Forget ANC For A Moment, This Makes You Appreciate The Sound Of Music

The Google Pixel Buds A Series are priced at Rs 9,999 in India

The Google Pixel Buds A Series joins the solid shortlist of wireless earbuds, that features the OnePlus Buds Pro, Nothing ear (1) and the Samsung Galaxy Buds2.

Google has been quite calm about the Google Pixel Buds A-Series wireless earbuds. Surprising? Yes, because this is a hotly contested space, in many ways right up there with smartphones in terms of the sheer number of launches and competition. Confidence? That is the most likely explanation. Google’s confident they have a winner on their hands. It is tough competition mind you, with the OnePlus Buds Pro very recently joining in on the fun. The price? Rs 9,999 and against the OnePlus Buds Pro at Rs 9,990 and Samsung Galaxy Buds2 at Rs 11,999. And not to forget the incumbents already there in the market. As a customer, choice is great. But you’ll be surprised how different things are on the features list, with the Google Pixel Buds A-Series seemingly not willing to get in on a spec sheet war. Over to you, and your credit card!

There is a certainty that the Google Pixel Buds A-Series wireless earbuds stand on surer ground compared to their predecessor. And that is absolutely understandable too, since this is the second generation and improvements all round were to be expected and likely. On the spec sheet, you’ll find that the Google Pixel Buds A-Series have 12mm audio drivers in each ear, a tweaked design for better fit and noise isolation, Adaptive Sound which understands your surroundings and adjusts the volume accordingly as well as real-time translation in your ears but only if you are using these with a Google Pixel phone. What hasn’t changed is the larger design, consistent battery life but there is now that added “Bass Boost” setting which a lot of you would most likely appreciate. We talked about the OnePlus Buds Pro and the incoming Samsung Galaxy Buds2, but do not forget that the absolutely brilliant Nothing Ear (1) wireless earbuds offer similar audio driver driven sound experience with a design that really stands out—for Rs 5,999 and therefore saving you a pretty penny as well. On the spec sheet, you’ll find that the Google Pixel Buds A-Series have 12mm audio drivers in each ear, a tweaked design for better fit and noise isolation, Adaptive Sound which understands your surroundings and adjusts the volume accordingly as well as real-time translation in your ears but only if you are using these with a Google Pixel phone

But here is the big takeaway. Google hasn’t gone the whole way with active noise cancellation in the Google Pixel Buds A-Series, something that the OnePlus Buds Pro and the Samsung Galaxy Buds2 have thought of, delivered on and talked about extensively. For some users, the lack of active noise cancellation and these earbuds putting too much trust on the updated design and Adaptive Sound to isolate them from the ambient noise, may just be a deal breaker. For others, it may not make much difference. Depends on how often you intend to use the wireless earbuds in noisy environments, such as commutes. In my experience and mind you this was mostly in environments with moderately noisy ambience, the Google Pixel Buds A-Series does a more than fair job of blocking out the din. Yet, there is absolutely no way you’ll be able to completely block out loud noises, such as if you are in traffic and impatient fellow commuters are honking in the vicinity. The Adaptive Sound making volume changes is subtle, and to be fair, I was not expecting them to be this sensitive and responsive yet measured. The advantage of the more old-school ways of the Google Pixel Buds A Series is there’s no ear strain from the pressure that active noise cancellation creates.

As far as the design stakes are concerned, the Google Pixel Buds A-Series are firmly walking down the path of understated looks. It is an attractive design, perhaps accentuating more the different approach to wireless earbuds. A more conventional approach, very similar to the USB-C buds that the company had a while ago. Each bud is a compact circle and, in most ears, it’ll pretty much peep out fairly minimally. No shouty, thick design and no long stems to contend with. The flush design will certainly appeal to those who don’t like large earbuds or find them ungainly to wear. Though in terms of weight, not very different from pretty much all the alternatives you may be considering. It is a matte dual-tone finish, with white on the outside and a darker shade of grey on the portion that sits inside the ear. What’s missing are some exciting colour options from the menu. In terms of wearability and comfort, the addition of the stabilizer arc which allows you to twist the earbuds after you slide them inside the ear and lock the fit, should help if you intend to go out for runs wearing the Google Pixel Buds A-Series. Google Pixel Buds A-Series have that welcoming sound. It is neutral out of the box and absolutely flat on the EQ. And if that’s a complaint, you can enable the Bass Boost mode and these earbuds simply transform into a personality that is a lot less serious and a lot more fun

The earbud design and the compactness of it all makes the case of the Google Pixel Buds A-Series a bit of an outlier. You’d have expected something a bit smaller than this, to be fair. These earbuds don’t have a stem, yet the case is vertically aligned and quite tall. In fact, this is very similar in looks and dimensions to the older OnePlus Buds, which have a long stem to contend with. Nevertheless, once that thought is come to terms with, you’ll appreciate the matte finish on the charging case as well. It doesn’t catch snudges or fingerprints, but somehow attracts dust off surfaces and cloth fibers very easily. Yet, if kept in the same pocket as a pen or keys, chances of this getting dinged or scratched are quite minimal. The case supports wireless charging, so that’s ticking off the modern checklist right away.

In each ear are large 12mm audio drivers, among the largest in the price bracket if not the largest. That is a solid foundation to build on from, before handing over the responsibilities to the sound processing algorithms to deliver on the promise. The result is the Google Pixel Buds A-Series sound really nice. Almost have that welcoming sound of a Bose headphone. Sounds neutral out of the box and absolutely flat on the EQ. And if that’s a complaint, you can enable the Bass Boost mode—and as soon as you toggle that on in the Pixel Buds app (free for Android phones on the Google Play Store) and the Google Pixel Buds A-Series simply transform into a personality that is a lot less serious and a lot more fun. There is definitely that added excitement to the sound, something a bunch of music genres demand for the best experience.

Pretty much the rest of the time, the Google Pixel Buds A-Series wireless earbuds deliver the sort of detailed layering of sound which isn’t easy to match and surpass. Wireless earbuds are getting better and better with detailing and I already feel there is more detailing to be heard than earphones could reproduce a couple of years ago—but the Google Pixel Buds A-Series seems to be playing a notch above what its price tag would suggest, and that’s a significant advantage if the sound is all that matters to you. These wireless earbuds are more vibrant and dynamic with the sound of music than you’d expect at first glance.

The battery life claims for the Google Pixel Buds A-Series is around 5 hours of listening time from the buds themselves and a total of 24 hours when you top up with the charging case. This isn’t at all bad, when you look at it in isolation. But remember, this is matching the run time that rival wireless earbuds offer with active noise cancellation in use most of the time. To be fair, would have expected more, but as it stands, this really shouldn’t be a deal-breaker. 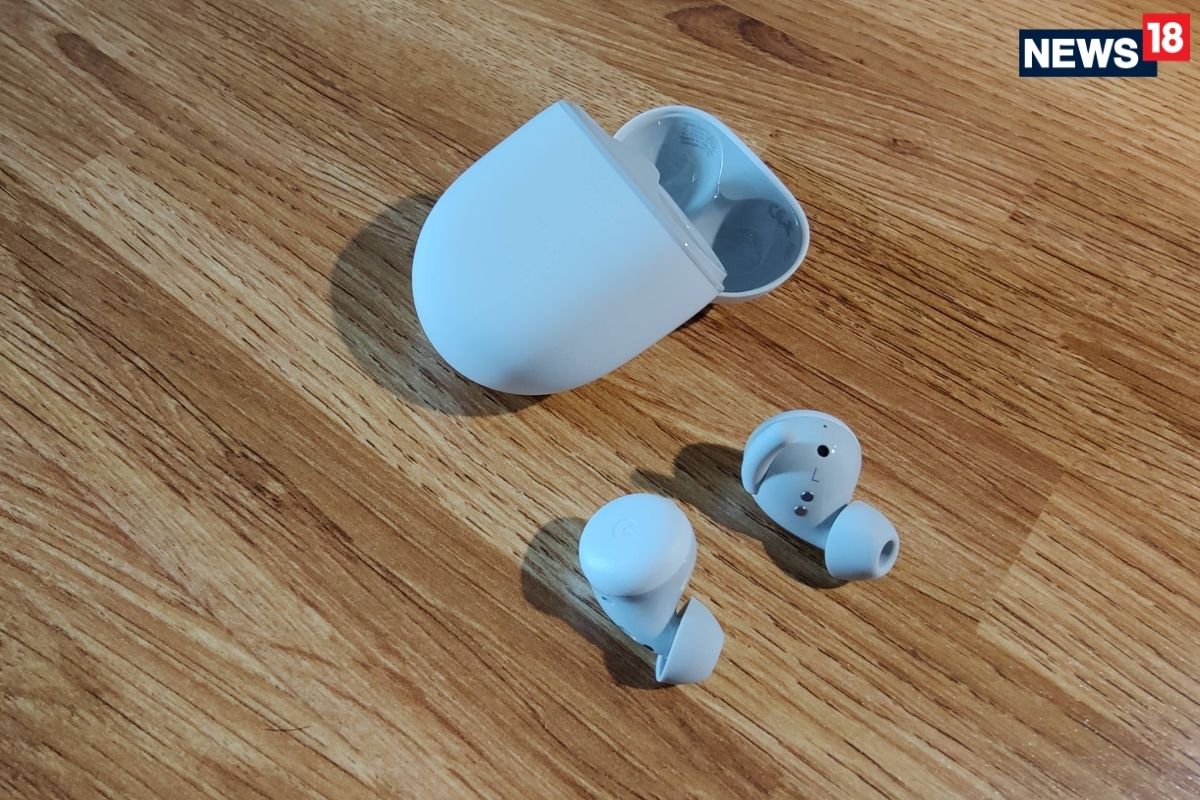 For some users, the lack of active noise cancellation and these earbuds putting too much trust on the updated design and Adaptive Sound to isolate them from the ambient noise, may just be a deal breaker. For others, it may not make much difference

The Last Word: If ANC Isn’t A Must-Have For You, Google Pixel Buds A-Series Must Be Considered

I didn’t use the first-generation Pixel Buds and therefore it is impossible to know exactly how big a jump the Google Pixel Buds A-Series are, generation over generation. Yet, what is absolutely clear is the fact that even without noise cancellation as an option, the Google Pixel Buds A-Series are more than capable of standing up to the likes of the OnePlus Buds Pro and the Samsung Galaxy Buds2. Remember, the Pixel Buds companion app is only for Android phones, which means iPhone users will not get access to some goodies such as the Bass Boost mode. That is something to consider. Yet, there is no doubt that the hardware has been given really good sound processing algorithms to work with, and the combination absolutely shines all the way through.