A leaked alleged box package of the Mi Band 4 seems to have given away the pricing of the upcoming fitness tracker.

Xiaomi is hosting a big event tomorrow (September 17) in India where it is expected to launch a variety of products. One of the most highly anticipated devices is the Mi Band 4, the company's latest affordable fitness tracking band. The company has confirmed that it will be launched during the Smarter Living 2020 event, which will also witness the launch of a new 65-inch Mi TV, Mi water purifier, arrival of Netflix on the Mi TV range and more.

The Mi Band has been one of the most popular and the highest selling smart wearable. The new variant was launched in China earlier this year and while we were expecting a similar price as the previous variant, a new leaked image suggests that it will be Rs 2,499. The pricing is seen on an alleged leaked box package of the device. 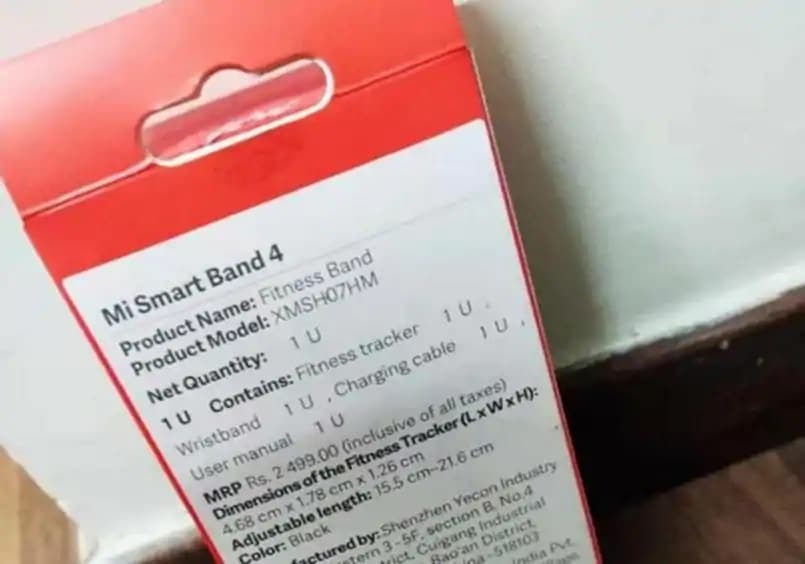 The Mi Band 4 features a coloured display and is expected to be offered in several colour options for the silicon band. There is a 0.95-inch AMOLED touch display this time which offers a 240x120p resolution and is protected with a layer of 2.5D curved glass on top. The fitness tracker will be able to show notifications from various apps like SMS, WhatsApp as well as your fitness stats.

It does look a bit similar to the Mi Band 3 but the charging pins have been moved to the bottom. It also comes with 5ATM water-resistant rating, along with several fitness tracking features, like running, jogging, cycling, apart from the step counter, heart rate monitoring and sleep monitoring features. There is an updated six-axis sensor which helps in detecting swimming activities such as Freestyle, Backstroke, Butterfly stroke, and Medley. There is also a special NFC version of the band.

As for the battery life, the company says that the Mi Band 4 can hold a charge of up to 20 days. The fitness band was launched in China for CNY 169, which roughly translates to Rs 1700. The leaked pricing is definitely higher, but in our opinion seems justified, especially since you are getting a coloured OLED display.