Balakot is one of the Jaish-e-Mohammed’s oldest training camps, which has found mention in many past instances of terrorism in India and abroad.

In the very early hours of this morning, Mirage-2000 fighter jets of the Indian Air Force launched air strikes at camps of terrorist group Jaish-e-Mohammed inside Pakistan occupied Kashmir (PoK). The government of India has confirmed the military action against the terrorists. "In an intelligence lead operation in the early hours today, India struck the biggest training camp of Jaish-e-Mohammed in Balakot. In this operation, a very large number of JeM terrorists, trainers, senior commander & Jihadis were eliminated," said Foreign Secretary Vijay Gokhale in a media briefing. The confirmation from the government is that the Indian Air Force attacked a terrorist training camp in Balakot. This is around 50 miles inside the Pakistani territory of the PoK.

You can easily search these locations on the Google Maps app, they all are in Pakistan Occupied Kashmir. Fire up Google Maps on your phone

(free app for Android and iPhones) or the web browser on your PC or mobile, and search for Balakot. You will be shown multiple Balakot locations, including one in Madhya Pradesh and one in Uttarakhand. There is also a Bala Kote in Poonch in Jammu and Kashmir. Do not confuse the Balakot in PoK with the ones which are located in these Indian states. However, when we try to calculate the distance between Balakot in PoK and Srinagar, Google Maps tends to stumble. 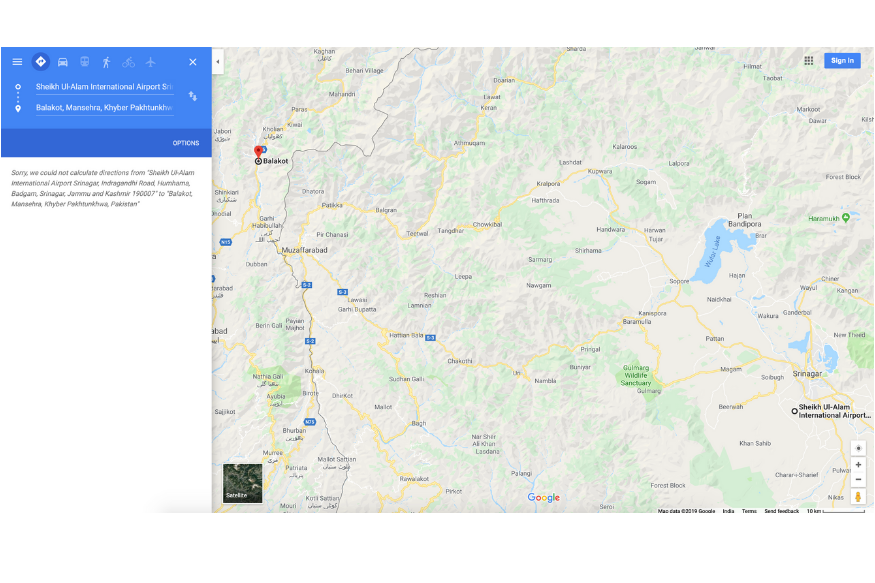 Balakot is a town in Mansehra District in the Khyber-Pakhtunkhwa province of Pakistan. Balakot is one of the Jaish-e-Mohammed’s oldest training camps, which has found mention in many past instances of terrorism in India and abroad. There was limited physical infrastructure at the base—witnesses have spoken of a main tin-roof shed, a small mosque and several bunker-style houses.

Earlier reports suggested that the Indian Air Force also hit another terrorist camp in Muzaffarabad, and also in Chakoti. Muzaffarabad is about 40 kilometers from Balakot, according to Google Maps. Chakoti is 57 kilometers from Muzaffarabad. Earlier this week, the bus service between Srinagar, the capital of the Indian state of Jammu and Kashmir and Muzaffarabad had restarted, after it was stopped after the February 14 terrorist attack on the CRPF convoy by a Jaish terrorist.