Honor 10 First Impressions Review: An AI Camera Phone to be Reckoned With in 2018

The Honor 10 redefines dual-camera setup on Android smartphones this year. Shutterbugs will love it but is camera your only requirement out of a phone?

Honor, a sub-brand of one of the biggest technology company in the world, Huawei, unveiled the new Honor 10 globally in London recently. The smartphone is going to be available in India starting May 2018 and will compete with the most anticipated affordable flagship smartphone of the year, the OnePlus 6. We have been using the new Honor 10 for a week now and are left quite surprised by the camera capabilities of this Android phone. While it would be unfair to the OnePlus 6 to compare this device to, it has a capability of carving out a niche for its own. Honor has been in India for a few years now and has produced some amazing smartphones in the past. The Honor 10 is a continuation of their commitment to crack the Indian smartphone market with better devices every year, but does the Honor 10 make that cut? Let’s find out in our first impressions of this device.

The Honor 10 has a Aurora Glass design and an aluminium frame to it. It weighs just 153 grams and that’s one of the reasons why it feels more plastic than a glass finished device. It’s extremely lightweight to hold and slippery too. The device comes in two colours and the one we have with us is the Midnight black colour of the Honor 10. It’s shiny too and attracts a lot of fingerprint smudges, and with the Indian summer at its peak, make sure that if you buy this smartphone, you’ll have to keep a cleaning cloth handy or put the Honor 10 in a cover. Though if we talk about the reflective back panel, it does offer some beautiful hues under varying lighting that makes it stand apart from other glass back smartphones that are available in the market.

Upfront the device comes with a FullView display that’s measured at 5.84-inches and offers a screen to body ratio of 86.2%. That gives it a nearly bezel-less design and makes it look beautiful. Another thing that’s become common in 2018 Android devices is the iPhone X like notch. The Honor 10 also comes with one that houses the earpiece and the front camera module. At the back of the device, one can see a dual-camera setup with an LED flash on the top left that looks strikingly similar to the iPhone 8 Plus and even the OnePlus 5T.

The camera module protrudes out of the body shell of the device as well that makes it go a little off balance when you place it on a table. Interestingly, Honor wants to highlight the AI (Artificial Intelligence) capabilities of the camera and just overdid the AI Camera branding on the back (Top Left) of the device. This was like an overkill for the device and could have been avoided. On the left of the device you find the SIM tray and on the right, you get the volume rockers and the power button. The bottom of the Honor 10 retains the 3.5mm headphone jack for you to listen to music, a speaker module and a USB Type-C port for charging and data transfer.

Overall the Honor 10 sports a very tried and tested design language that’s also very similar to the iPhone and the OnePlus 5T. We loved the flatback designs that Honor offered on the Honor 8 Pro last year, but the Honor 10 does not appear to be any different than many other Android smartphones in the market currently. Also read: One Day to OnePlus 6 Launch: Images, Price, Specifications And All You Need to Know

The Honor 10 offers a 19:9 aspect ratio FullView display with 86.2% screen to body ratio. Also, the device comes with an Ultra Sonic Glass design that offers it a sheen unlike any other smartphone in this price range. The 5.84-inch display has a resolution of 2280X1080 and offers a FHD+ experience which is as good as any other smartphone that offers a FHD+ display. Also the Honor 10’s 432 ppi of pixel density is one of the best in the segment. The Honor 10’s display is fairly bright and less reflective under direct sunlight as well. The display also offers a smooth touch experience and great viewing angles. Though the colours on the display do tend to be a little oversaturated while using a few applications and playing some games. In terms of sensors, the Honor 10 offers quite a lot. It comes with a fingerprint sensors a digital compass, an ambient light sensor, a gravity sensor, a status indicator, a gyroscope and a hall-sensor.

Honor 10 is a device that like many Honor devices runs on Huawei’s in-house HiSilicon 970 octa-core processor. There are four cores that are clocked at 2.36 GHz and offer a Cortex A73 architecture, the other four cores are clocked at 1.8GHz and are built on a Cortex A53 architecture. Honor has also offered an I7 co-processor on the Honor 10 for more firepower. Backing all this processing is 6GB of RAM and a storage of 128GB is also offered on this device.

The Honor 10 runs on Android 8.1 Oreo operating system and on top of it you get Huawei’s own EMUI 8.1. This is a bloatware that’s also light and functions without any hiccups on top of the Android OS. What we like on this is a smooth performance when it comes to multitasking and gaming along with an incredible battery management system that comes with the convenience of the EMUI 8.1. Also, the 3,400 mAh battery has lasted us a good day and a half with phone calls, a couple of hours of Netflix streaming, light gaming, clicking some images and using a few social media apps. Overall the Honor 10 till now has been a stable device for us with no hang-ups or crashes.

Another big plus, is that the smartphone uses an in-display fingerprint sensor for security, a feature that has only recently emerged in the smartphone industry with a Vivo smartphone. In addition to this, it also offers facial recognition support. Honor 10 is not a subtle device when it comes to flaunting it’s AI capable camera’s. Honor View 10 was a device that in January gave us a glimpse of AI capabilities on a camera of a smartphone. The Honor 10 takes it a level up with 22 real-time scene and object recognition on offer. The camera also offers various modes that the social media photo bugs will love along with a pro-mode for the users who like to tinker with the settings like ISO, Shutter speed etc while getting that perfect click. For Instagram lovers and Snapchat users, the device also comes with pre-loaded AR stickers and backgrounds that are also hilarious and cute.

At the back, the Honor 10 comes with a 24-megapixel plus a 16-megapixel sensor with f/1.8 wide aperture. This is a lot of firepower for a dual camera smartphone and also the combination of AF+PDAF makes it focus faster and sharper as well. There are also modes like 3D panorama, Monochrome, HDR, Time-Lapse, Slow Motion capture as well as AI Photography with a lot fo AR stickers and backgrounds. The image quality is better than the Honor View 10 that came out earlier this year, but somehow in low light, the noise in images under a few circumstances is overpowering at times. The images usually come out crisp and sharp and a little saturated in daylight conditions. 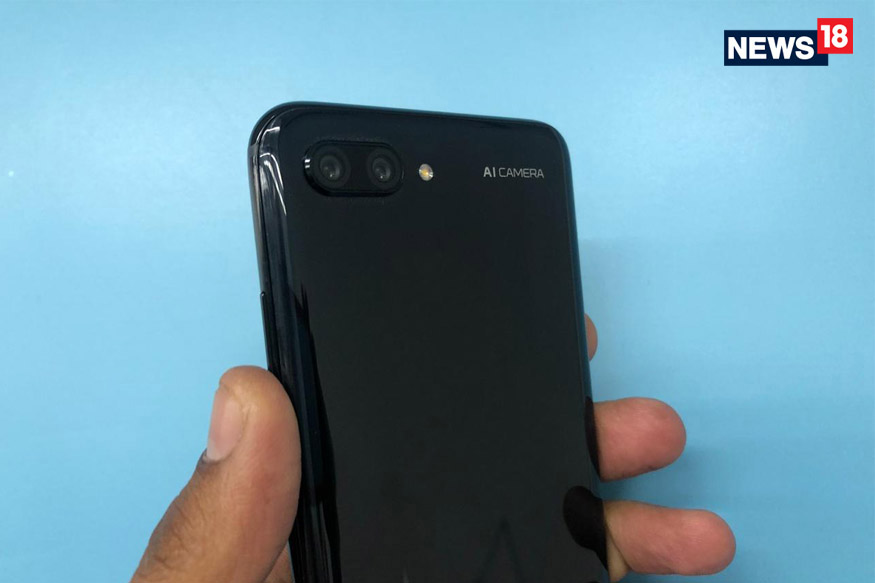 There is also a bokeh effect on offer with the Honor 10, that basically makes you click DSLR like portrait images. The software magic with dual cameras working in tandem in smartphones have come a long way since it was introduced a couple of years ago. The Honor 10 does deliver on some exceptional bokeh portrait images. Also, something that was odd and similar was the option of lighting modes while clicking bokeh photos on the Honor 10 was strikingly similar to the one seen on the iPhone 8 Plus and iPhone X. You can say it’s inspired but not a bad thing at all for users who swear by Android smartphones.

The front camera on the Honor 10 also comes with a 24-megapixel AI camera that has a sensor that offers a large 1.8 um pixels on your selfies. There is of-course portrait mode on offer on the front camera as well, and similar AI and AR capabilities that you get on the camera at the back of the Honor 10. The selfies come out really nice as well and even low-light selfies come out well. What bothered us is a question that how much of a beauty mode can make you change and not recognise yourself at all. That's what the beauty mode on the Honor 10 does if you max out the beauty settings. This can be good as well as bad depending on what side of the spectrum you are on Instagram/Snapchat.

Overall, the camera capabilities of Honor 10 is something to be reckoned with in the affordable flagship smartphone space. We believe that even the OnePlus 6 will have a tough time competing with the camera on the Honor 10. Having said that, its not like the OnePlus 6 will turn out to be a bad phone in the camera department, but Honor 10 just packs in too much firepower. What Do We Think?

The Honor 10 is a smartphone that certainly has impressed us with its camera, and it is a phone that will take to the liking of people who primarily just use their smartphone to click photos. It does have its shortcomings in terms of a look-alike design language even if the materials are exotic and a general sense of not having a Qualcomm Processor. The Kirin processor is not a bad chipset at all, but it just might not enhance the confidence of buyers who are accustomed to the brand value and perception of a Qualcomm Chipset on a smartphone.

Overall the Honor 10 is a device that should be in your must-have list if you just want a good camera on your phone, and only on your consideration list if you don’t have that extra 2-grand for a Qualcomm powered device.