The Honor 20 series of smartphones has been launched globally, with the Huawei-owned subsidiary introducing the Honor 20, Honor 20 Pro and Honor 20 Lite into the fray. The lineup follows the trend of three-variant lineups, with the Pro variant presenting overkill specifications at a higher price, and the Lite variant presenting a slightly compromised experience but offering superior value for money. The highlight of the Honor 20 series is its quad-rear camera setup, spearheaded by the Sony IMX586 48-megapixel image sensor. The new Honor 20 series fits into the premium segment of smartphones, sitting beneath the flagship ranges of the Huawei P and Mate lineups. Here's looking at the three new smartphones in closer details, in terms of the specifications they offer.

Honor 20 Pro
The Honor 20 Pro is the de facto highlight of the lineup, and is powered by the HiSilicon Kirin 980 SoC, which is one of the four 7nm mobile SoCs in the market right now. It is paired with 8GB RAM and 256GB native storage, along with a proprietary graphene sheet cooling technology to control the device from overheating during gaming sessions. On the front, it features a 6.26-inch Full HD+ display with 19.5:9 aspect ratio, and a claimed 91.7 percent screen to body ratio. The display gets dual-curved edges, which Honor refers to as 3D curved glass. 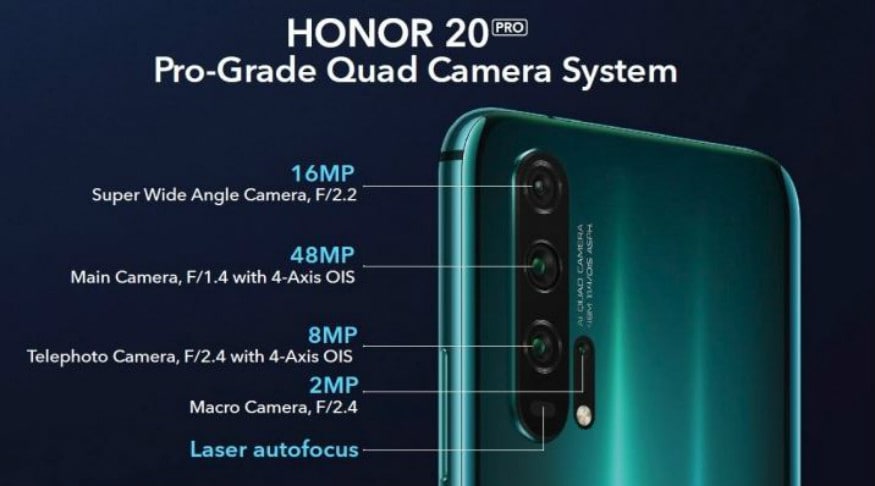 Instead of an in-display fingerprint sensor, the Honor 20 Pro has a side-mounted one. The highlight is the quad-camera setup at the rear, which is stacked vertically in two modules. The primary sensor is a 48-megapixel Sony IMX586 unit paired with f/1.4 aperture lens and four-axis optical image stabilisation. This is complemented by a 16-megapixel ultra wide angle camera with f/2.2 lens, an 8-megapixel telephoto camera with f/2.4 lens and four-axis optical stabilisation, and a 2-megapixel sensor to add macro details to photos, paired with an f/2.4 lens. It also gets an individual laser autofocus unit, along with an LED flash. The telephoto setup is capable of producing 3x optical, 5x hybrid and 30x digital zoom. There is also a 32-megapixel in-display front camera onboard.

The Honor 20 Pro is powered by a 4,000mAh battery pack, which is combined with a 22.5W charging adapter that Honor claims can juice up the smartphone by 50 percent from nil within 30 minutes. The Honor 20 Pro misses out on a 3.5mm audio port, and uses a USB-C port for charging and other purposes. The smartphone is based on Android 9.0 Pie, and is priced at €599 (~Rs 46,500). The smartphone can be purchased in Phantom Blue and Black colour variants.

Honor 20
The Honor 20 shares much of the bearings with the Pro variant. While it uses the same SoC, it gets lesser RAM with 6GB onboard, and only 128GB of native storage. While it does feature a quad-rear camera, the 8-megapixel telephoto unit has been swapped for a 2-megapixel depth assisting unit. It features the same display and front camera, but the battery capacity is slightly lesser, at 3,750mAh -- albeit with the same charger. Instead of the Blue, the Honor 20 can be purchased in an 'Icelandic White' finish. The Honor 20 is priced at €499 (~Rs 39,000).

While no word regarding its India launch was made today, the Honor 20 series is expected to come to India soon, and rival the recently launched OnePlus 7 and 7 Pro in the premium segment.
Tags