Honor's budget smartphone is an appealing offer at its price but is it the best? We find out in this review.

Huawei sub-brand Honor has been looking to dominate the budget smartphone market in India with a slew of launches this year. Two such smartphones unveiled by the company back in May, are the Honor 7C and the Honor 7A. The former one comes as the more premium offering of the two and triumphs a FullView display, along with a dual camera setup at the back. Priced at Rs 9,999 for the starting variant, does the Honor 7C have what it takes to dominate the budget smartphone division which already houses offerings like the Xiaomi Redmi Note 5, Oppo Realme 1 and others? We find out in this review.

Honor has mostly been on point with the design of its smartphones and the legacy continues with the Honor 7C. The smartphone does not have a look and feel of a budget device and instead imitates quite a premium appeal. While the front has been kept simplistic with very less bezel area housing a selfie camera at the top and Honor branding at the bottom, it is the back that has an elegant finish to it. Two antennae lines run along the top and the bottom at the back, which comprises of a completely straight metallic back plate. Along the top antennae line, the horizontal dual camera setup has been placed which protrudes slightly. The fingerprint sensor is in the middle within an easy reach and another Honor logo can be seen around the bottom of the back. The right edge houses the volume rockers and the power button, while the dual-SIM slots have been placed on the left edge. Similarly, Honor has accommodated the USB type-2.0, speakers and a headphone jack at the chin of the smartphone, keeping the top edge empty.

Alongside the premium design, the handling of the phone also comes easy, thanks to its very less weight and optimum dimensions. A one-handed usage is still very restricted on this one though.

Honor has used its own EMUI 8.0 on top of the Android 8.0 Oreo. This means that the Honor 7C does have all the latest Android features to offer. On top of this, the EMUI 8.0 has its own set of features including motion controls, one-handed UI and swipe support on the fingerprint sensor for several functions. Along with this, the EMUI 8.0 also comes with its own bunch of apps, the important ones of which include an intelligent messaging and calling app that automatically blocks calls as well as messages based upon the user’s pre-specified conditions.

The security features on the Honor 7C include a fingerprint sensor at the back as well as facial recognition support, both of which are quick to react. The fingerprint sensor also doubles up as a shortcut access for apps or actions through swipe motions and double taps. 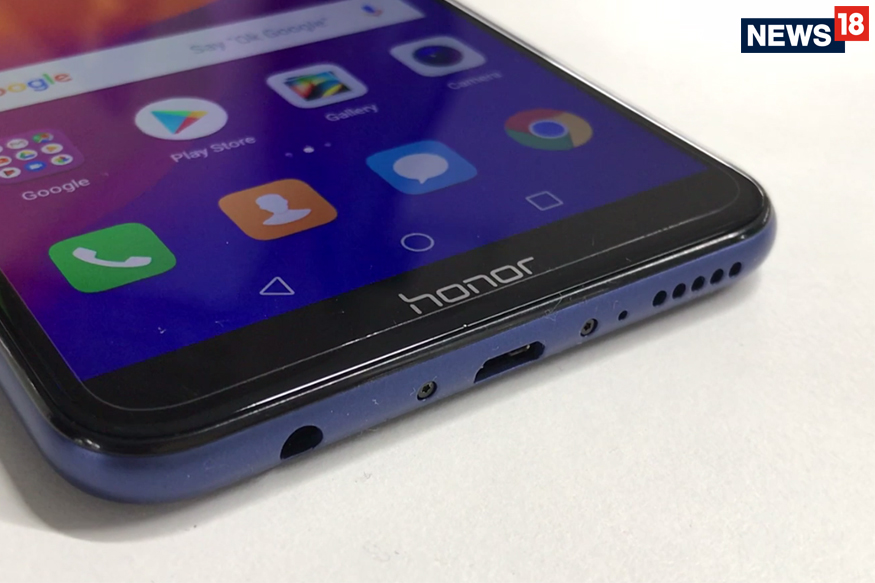 Honor 7C USB port, headphone jack and speakers are placed at the chin of the smartphone. (Image: Sarthak Dogra/ News18.com)

Honor has switched from its own Kirin processor and has opted for a Qualcomm Snapdragon 450 SoC on the Honor 7C instead. While the move should’ve worked for the greater good, the positives are limited to an extent. In practical terms, the Honor 7C works well for simple operations like calling, messaging, social media usage and even playing simple games on the device. However, as soon as the operations are stepped up in any form, there are noticeable lags on the device. This can be in the form of multi-tasking or playing graphics intensive games.

Honor had introduced another budget smartphone recently as the Honor 9 Lite. The Full HD+ display on the smartphone was arguably one of the best at the time in its segment. The Honor 7C, however, surprisingly misses out on that. Due to this, the display on the Honor 7C, though has ample colours and apt sharpness and brightness, is not the best for a user’s binge-watching pleasures. The 3000 mAh battery on the Honor 7C is just good enough to last you a day and that too, under a restrictive usage. If you extend that to a demanding use out of the smartphone, it is recommended that you carry the charger or a power bank along with the Honor 7C.

The cameras on the Honor 7C are a bitter-sweet experience. On papers, the device comes with a 13-megapixel + 2-megapixel dual camera setup along with an LED flash at the back and an 8-megapixel selfie camera at the front. While the colours and brightness captured by the smartphone’s cameras are appreciable, there is a lack of detailing in the pictures under ample light. Under low-lighting, the noise in the images is too much to ignore. Most of the times, the Honor 7C is only able to produce grainy images out of the front as well as the back camera, something that is a bit surprising for an Honor smartphone. Honor 7C comes with a dual-lens camera setup and a fingerprint sensor at the back. (Image: Sarthak Dogra/ News18.com)

As mentioned earlier, another offering from the house of Honor, the Honor 9 Lite, had been among the top contenders in its segment upon its arrival. Now with the Honor 7C, Honor seems to have limited its budget attempt. There is no Full HD+ display, a limited battery and a below average camera quality.

To make up for these, Honor 7C has been embedded with all the latest features like the latest Android Oreo OS, facial recognition, FullView display as well as a dual camera setup. But if we were to compare this smartphone with other options in the market, Honor 7C can be skipped for its alternatives like the Asus Zenfone Max Pro (M1) and the Xiaomi Redmi Y2. Honor 7C has an appealing design with a flat back panel. (Image: Sarthak Dogra/ News18.com)
Tags