The price of Rs 17,880 makes the Honor 8 a lucrative deal for buyers looking for a stylish flagship smartphone with dual-lens camera. (Image: News18.com)

The Honor 8 at 153 grams packs in more than what the consumer will want from a sub-30K device.

Dual-camera is been one of the main highlighting feature on many smartphones this year. Huawei started the trend with the P9 earlier this year and even Apple introduced one on the iPhone 7 Plus. But now Honor which is also a sub-brand of Huawei has come out with their dual-camera flagship smartphone for the year 2016 – Honor 8. Priced at Rs 29,999 the Honor 8 has spoiled the user for choice in the sub-Rs 30K segment with the OnePlus 3 ruling the charts. But, does the Honor 8 deliver that punch to be the ultimate smartphone to buy under Rs 30,000? We at News18 Tech get you a review. The Honor 8 has many things going for it. For starters, the flagship Sapphire Blue colour is something of a novelty factor with this device. For people who are style conscious the glass and metal finish on the Sapphire Blue colour is bound to steal their hearts. The use of dual-2.5D curved glass both at the back and the front of the device make it really appealing. The device is shiny and scratch resistant. There is no denying that it’s the best-looking device under Rs 30k in India right now and purely in terms of looks beats the likes of Asus Zenfone 3, OnePlus 3 and even the recently launched Moto Z Play. There is also a 3D fingerprint sensor on the Honor 8 that can be used to unlock the phone or launch an app. The 5.2 inch HD display on the Honor 8 is just about the right size. The display is bright enough and offers good outdoor visibility. The device runs on Android 6.0 Marshmallow operating system and on top of that Honor has put their own Emotion UI 4.1. The bloatware on the device is non-interfering with its performance. It is also easy to operate and navigate on the device.

The Honor 8 is powered by an Octa-Core 16 nanometer Kirin 950 SoC with i5 co-processor and is backed by 4GB RAM. This is one of those phones that proves that you really don’t need that extra RAM just to get thing right. The device offers ample firepower, does not heat up violently and can handle anything that you throw at it. Be it multitasking or gaming the Honor 8 does not disappoint.

The i5 intelligent co-processor manages the sensors, working with the Kirin 950 SoC chipset to provides an increased response times and battery life. Coming on to the major USP of this dual-SIM 4G LTE smartphone – the dual-camera. Honor 8 just like the Huawei P9 and the iPhone 7 Plus packs in a dual-camera system. There are two 12-megapixel sensors each on the device along with laser auto focus and a 1.76-micron pixel size. One is a RGB sensor and the other one is a monochrome sensor. Many might think that the camera is similar to the Huawei P9, and they are quite similar too, but the missing ingredient on the Honor 8 is the Leica lens. 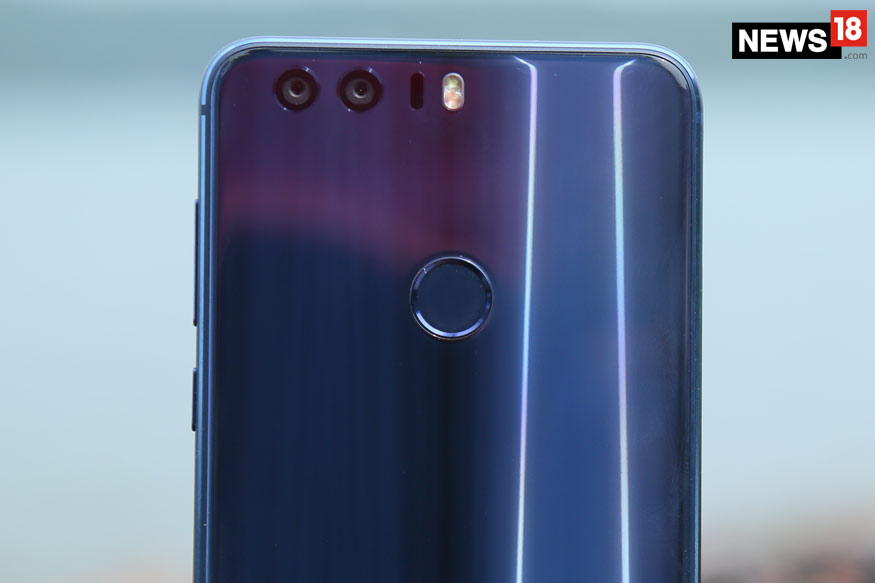 Still it does not make much of a difference as the image results are just exceptional on the Honor 8. It is easily one the best camera on an Android smartphone under Rs 30,000. The wide aperture mode makes photography really interesting, especially if you like clicking portraits or macro shots. And if you need greater control with the camera there is the pro-mode that helps you tinker with things like ISO, aperture and shutter speed. The dual lenses capture more light, increasing picture quality to produce move vivid colors and crisper details.

And for people who are in love with Instagram and social network posting of selfies the 8-megapixel front camera will not disappoint you. The device is also very potent in capturing videos.

The Honor 8 is a bling device and the glass finish at the back attracts a lot of fingerprint smudges. Having said that the easiest solution is to put a cover on the phone. But all beauty of the Honor 8 is lost once you do that. So, if you buy this phone make sure you carry a cloth to keep it clean. The Honor 8 at 153 grams packs in more than what the consumer will want from a sub-30K device. There are many companies out there who say that a flagship phone is bound to pinch a consumers pocket. But Honor 8 beats all those notions by offering everything from a brilliant camera to a stable ecosystem. Its major competition right now is just the OnePlus 3, but the Honor 8 beats it black and (Sapphire) blue purely on its camera capability.