HP Chromebook 11a will work best if you use Google services. Yet, when you do need to use other apps, Chrome OS doesn’t stand in the way. Great battery life too.

There is just that undeniable simplicity about the Google Chrome OS that should have made the Chromebooks a really viable computing device for many. Educational and e-learning as well as basic work laptops are two scenarios that come to mind. Yet, as things stand, it seems to be that only HP is pushing the case for Chromebooks in India with most other laptop makers pretty much ignoring the potential that Chromebook offer. For most others, the focus continues to be on Windows 10 laptops, which at these really price points, don’t really deliver a slick computing experience at all. It didn’t take long for HP to continue down that path of consistency in 2021, with the new Chromebook 11a. This is priced at Rs 21,999 and joins the HP Chromebook 14a. The biggest difference between the two, is with the processing power—the Chromebook 11a is powered by the MediaTek MT8183 chip while the Chromebook 14a has the Intel Celeron N4020 processor. Yet, while the Chromebook 14a and indeed Chrome OS don’t exactly have to fight off a direct competition, there is the big perception battle on the shop floor. Chrome OS isn’t exactly common knowledge, at least on our shores. And then there is the competition from the convertibles—the tablets that get keyboard attachments too.

The HP Chromebook 11a is a pretty laptop to look at. The design language as a whole is very similar to most other HP laptops. In fact, the blue colour looks really pretty. You’ll know it is not a Windows 10 machine but is instead an HP Chromebook because there is the Chromebook branding on the lid. Plastic build, but nicely put together and the materials feel good to touch. It’s a slim laptop too, measuring just 1.68cm in thickness. Much like the Apple MacBook series, the HP Chromebook 11a also powers on the moment you take this out of the bag, place it on a table or on your lap, and open the lid. There is a USB 2.0 port, a USB C port to which the charger also connects for power delivery, a headphone jack and a microSD card slot. HP calls this Indigo Blue, and it is this blue colour that really makes the Chromebook 11a stand out in the sea of otherwise grey and black boring laptops. You’ll probably love it when you can step out and take this to a meeting. This tips the scales just over 1kg and is really genuinely light. What HP could have done is given it a more compact power adapter, something that Asus has done with its laptops recently. Instead, you still get the massive brick with two long cables emerging either side of it, and that means really cool looking laptop sleeves are out of the equation if you also need a pocket for this bulky power brick. 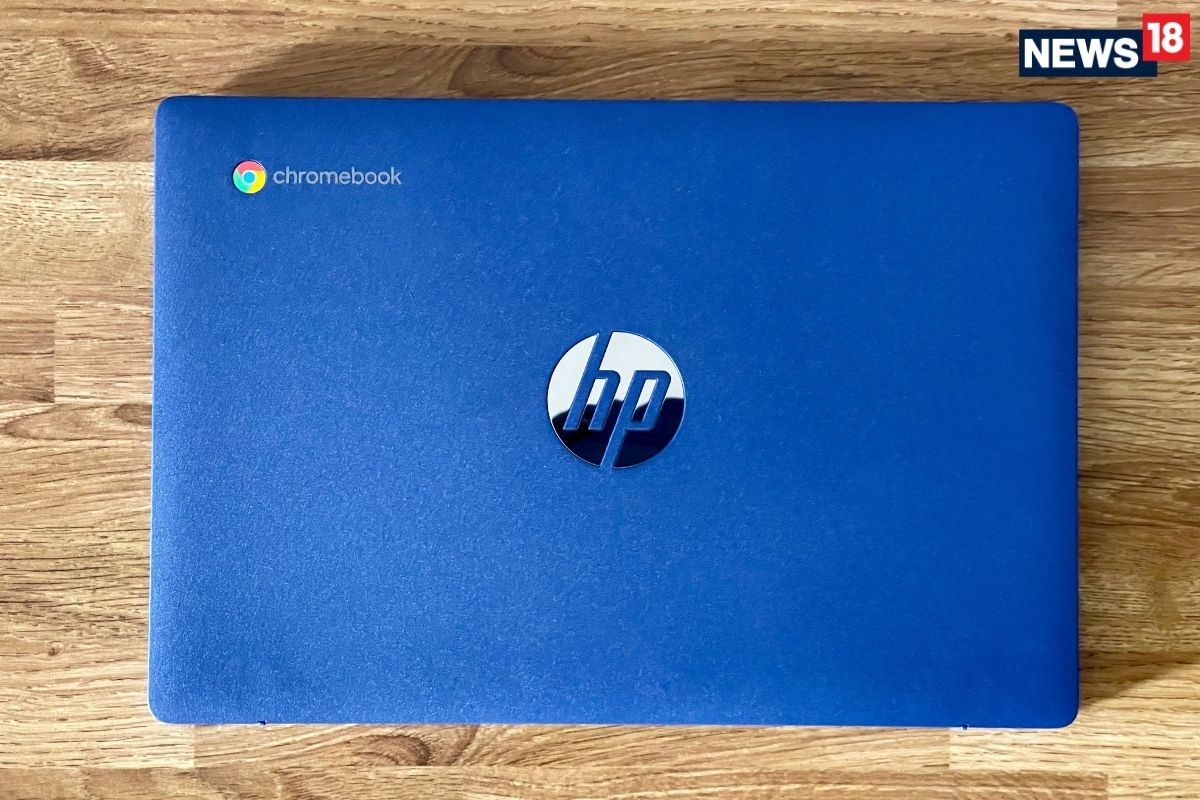 I really don’t know about you, but this is the first time I’m using a complete computing device running a MediaTek processor. The MediaTek MT8183 octa core chip to be precise. Alongside is 4GB RAM. Considering how light and frugal Chrome OS is, this combination really piqued my interest. My takeaways from the experience are firm on the belief that the HP Chromebook 11a will not deliver anything but a consistently smooth Chromebook usage experience. The way the platform is developed and the way the apps are designed and written, it doesn’t have the sort of demands from the processor and the memory, as perhaps the Microsoft Windows 10 machines. Apps on Chrome OS simply fly along and the Chromebook itself takes hardly a handful of seconds to boot up and be ready for work. Think about it—4GB RAM in a Windows 10 machine would be an absolute no-go. You get 64GB storage plus the memory card slot to add more. Then there is also the bundle of 100GB of Google Drive space for one year, post which you’ll probably get used to it and have to subscribe to a Google One storage plan. The experience is significantly enhanced with the really good keyboard that is a part of the HP Chromebook 11a experience. Its neatly laid out, very similar to what other HP laptops have had over time and is well placed if you need to type quickly and accurately. The trackpad isn’t the biggest in terms of the space that’s available for your fingers to manage the swipe gestures but should get the job done nevertheless once you get a bit used to it. The battery life stats that you should expect for most usage scenarios, is around the 14-hour mark, which easily means a day at work without having to carry that old-style brick charger too. Neat.

But what really is the big deal with the Google Chrome OS? It is the consistent sheer simplicity of the Chrome OS which continues to make it more than a compelling alternate to Windows 10 based laptops. Which to be honest, around the Rs 25,000 price point, will more often than not offer an absolutely hateful experience. Simplicity was the very foundation of Chrome OS many years ago, and that continues even now. I remember my first tryst with Chrome OS when it was launched, and there was the distinct feeling that anyone who was using Google’s services extensively would love it, but it was a pretty sparse beyond that. Times have changed though, for the better, and for the sake of versatility. The Chrome OS platform is no longer what you may allege as a glorified Chrome web browser, with some additional smarts. It has everything, and everything has been improved too over time—a desktop, a proper file explorer, a download manager, and full-fledged apps—and lots of them too. Perhaps as you would expect from any computing device worth your time and money. This no longer feels basic and to the point, and there is that definite aura of a complete computing device that you can use at work, while traveling and even for lighter work at home. Continuing on the point of apps, the biggest evolution that the Chrome OS has gotten over the years is the ability to run apps meant for your Android phone as well. That is, more than 1 million apps readily available for this new computing device that you may be eyeing. That is why the full-fledged Play Store is also available on the Chromebooks. Microsoft’s Word, Excel and PowerPoint apps? The Spotify app? Video streaming apps. You name it, and the whole wide world of productivity, utility and entertainment apps are available. For any Android phone user, the switch could prove to be close to seamless—and that is a genuine value addition. 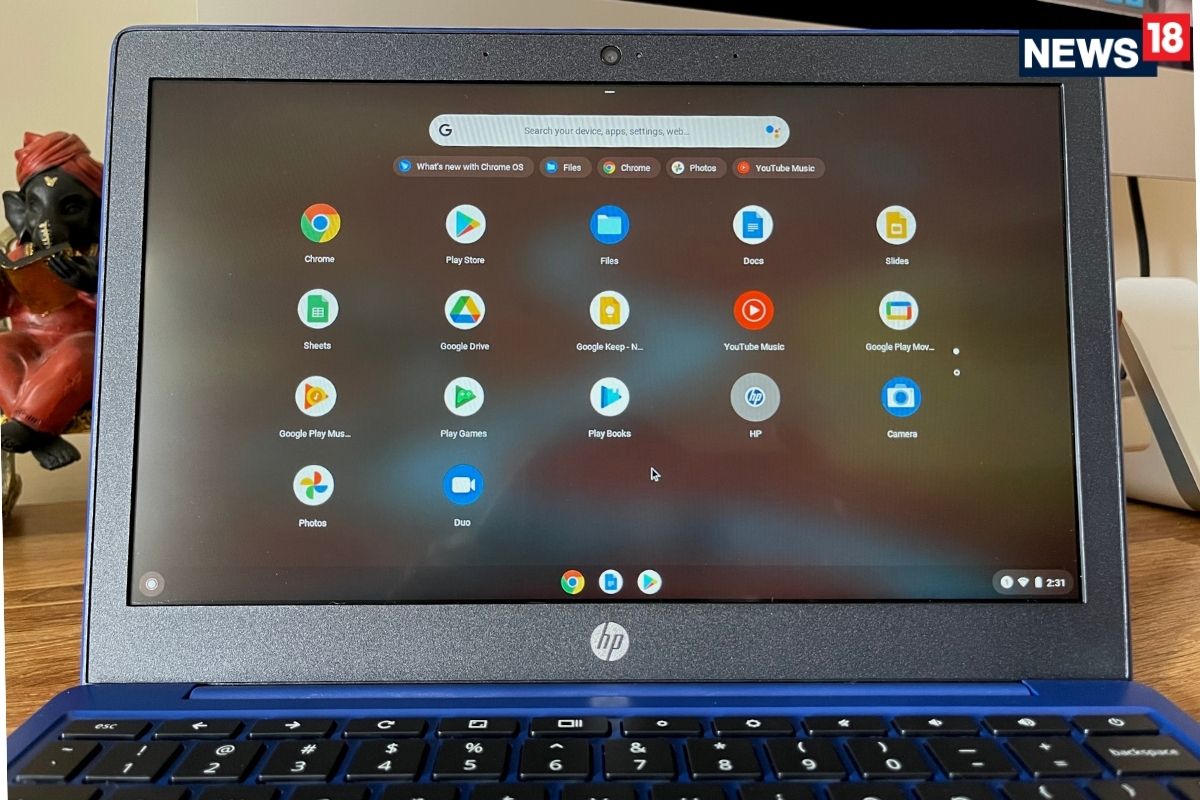 The Chrome OS in its updated yet current iteration very effectively counters the perception, that buying a Chromebook means you are locked into Google’s ecosystem. You are in no way restricted to using Gmail, Google Drive, Chrome web browser and Google Docs—or even if not restricted, offering a hampered experience elsewhere. That is absolutely not the case. Don’t like Google Chrome? You can switch to Firefox. Want to use Dropbox instead Google Drive? Sure, you can. Amazon Prime Video, Hotstar, PUBG, Adobe Photoshop Lightroom, you name an Android app and chances are it will run smoothly on Chrome OS. The Google Smart Lock feature would be fantastic for anyone who uses an Android phone. There are extensive security measures working away in the background as well. For instance, the sandboxing feature isolates every open app from core operating system processes, which makes Chrome OS secure from malware that may attempt to cripple the OS itself. All said and done, Google’s own apps and services will be available up front, and that’s to be expected. The Chromebook preinstalls the G Suite apps, Gmail, Google Assistant, Google Chrome, Google Drive, YouTube, Google Docs, Google Keep, Google Calendar, Google Hangouts and more.

You might be a bit concerned about the screen size though. Not everyone can make do with a compact screen, on a primary computing device. If you have to work on spreadsheets, for instance, a wider screen real estate comes in handy. What the HP Chromebook 11a offers is a 11.6-inch screen. It is bright, it is quite crisp and colours pop out just about right. No fancy modern day features such as a high resolution or HDR capabilities. I have this sneaky suspicion that you may after a point feel limited with the space that is available, in case you have to work on apps side by side or need more horizontal space for apps. Something I often need to, from time to time. Yet, for most users who may simply need a compact laptop to carry around for thrashing out emails, working on documents and more, this helps tick off the portability aspect too. A smaller screen size such as this may not work well in some usage scenarios, but that’s countered by the requirements of a larger demographic, who demand ease portability and compact footprint. The Last Word: Chrome OS Is Much More Than Meets The Eye

The more things have changed with Chrome OS over the past few years in terms of upgrades and added versatility, the more things have actually not changed much. Which is a good thing, because the core principles of simplicity and frugality remain the foundations very much as before. My first tryst with a MediaTek chip in a laptop has turned out to be a pretty interesting experience, also helped by Chrome OS itself. Yes, the HP Chromebook 11a will work best if you are deeply entrenched in the Google app and services ecosystem. It really makes sense for you to use Google’s services to be able to make the best use of a Chrome OS platform. Yet, if and when you do need to use other apps and services, Chrome OS doesn’t stand in the way. Plus, you get a laptop that doesn’t need a 2.6GHz processor and 16GB of RAM to work smoothly, and battery life is robust too. Unlike Windows 10 laptops on a budget, this doesn’t have any glaring compromises. That itself is very welcome.