The HTC 10 is one of the most worthy smartphones to own in 2016, if you want to stand out from the generic crowd.

The device has signature HTC design lines with a metal body that looks premium. At its thickest point, the HTC 10 is 9 mm thick. That might be more than its competition but that's what gives the HTC 10 its character. It's a handsome looking device that comes with all the firepower that a user will need in 2016. Gone are the dual front speakers that were one of the USP's of HTC phones, but the best part is that the HTC 10 still has BoomSound on it. So you get one front speaker and a subwoofer at the bottom of the phone. The HTC 10 is also equipped with the latest USB Type-C for charging and has support for CDLA headphones. And yes it's compatible with a 3.5mm headphone as well. The phone supports Quick Charge 3.0 and the 3000 mAh battery easily lasts a day for heavy users. For connectivity you also get things like a DisplayPort, DNLA, Miracast, Google Cast, AirPlay and HTC Connect. The HTC 10 features a 5.2-inch Super LCD5 display with a Quad HD resolution. It has a pixel density of 565 ppi and the Super LCD5 display performs really well. It's bright and is easy to view even under bright sunlight. Like any flagship device in 2016, the HTC 10 is powered by the quad-core Qualcomm Snapdragon 820 processor, clocked at 2.15 GHz that's backed by Adreno 530 GPU and 4GB RAM. The phone runs on Android 6.0 Marshmallow with HTC Sense UI and it's very intuitive and easy to use. The performance is simply amazing on the HTC 10 and gaming experience is exceptional. The phone also does not heat up like many flagship phones in India. The user experience on the HTC 10 is completely hassle-free. There is also a fingerprint scanner on the HTC 10 that's super-fast and the accuracy rate is almost as good as what you get on touch ID on an Apple iPhone. The best thing about the camera on the HTC 10 is the 5 megapixel front-facing shooter. This comes with OIS (Optical Image Stabalisation) and none of the phones in India have that on the front camera module. 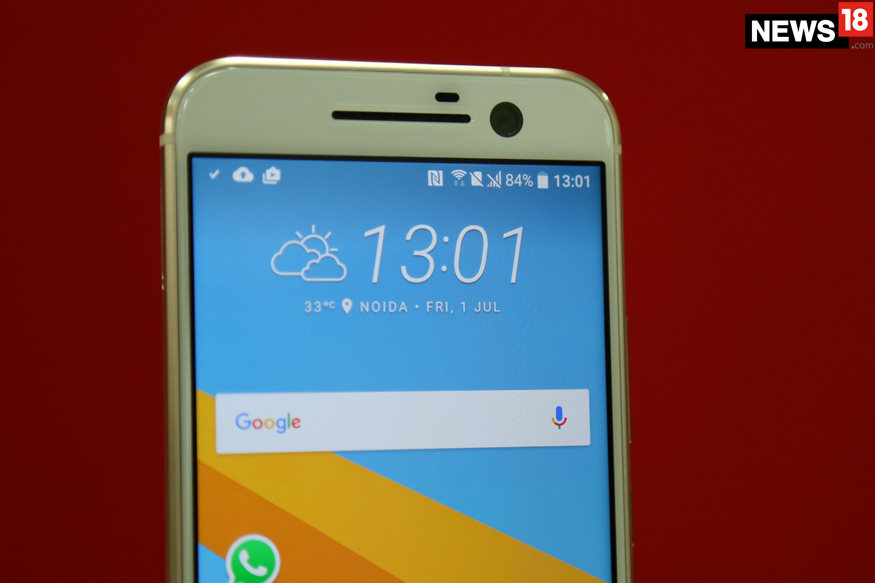 The OIS helps with taking selfies in low light conditions and even while walking. The focus speed is fast and it captures selfies with precision. The front camera is also exceptional for taking videos. The camera app is easy to use and comes with a manual mode as well if you like to experiment with phone photography.

What's Not So Cool An f/1.8 aperture further bolsters low-light performance, and the camera also comes with optical image stabilisation. The image quality is way better than what we got on earlier HTC devices but not as good as a Samsung Galaxy S7. Having said that the images taken from the primary camera are acceptable but they lack detailing.