Huami Amazfit Stratos Review: Foundations in Place, But Justifying One is Tough

The strong competition from the Apple Watch and the Fitbit Versa means that despite the slight price advantage, the small foibles of the Amazfit Stratos get highlighted even more.

The sports watch ecosystem battles are heating up. Established names such as Garmin and TomTom are facing competition from new brands such as Xiaomi’s Huami. The Amazfit Stratos watch is a proper fitness watch as well, and can track a wide range of activities including running, cycling, swimming, mountaineering, trail running, triathlon, tennis, football and more. As a proper smartwatch, it can do more too. With a price tag of Rs15,999, you’ll be surprised at how this smartwatch is sitting on a solid foundation to build on.

One look at the Amazfit Stratos, and you’ll probably either find the size too big or just perfect. Personal preferences will dictate how well you like this 46mm watch, but safe to say that it has an imposing personality. It weighs 70 grams, and unless you have really thin wrists, the footprint shouldn’t bother you. As you would expect from a watch that is meant for tracking a variety of fitness activities including swimming, this is water resistant as well up to a depth of 50 meters. The ceramic bezel looks great and feels premium when you wear the Amazfit Stratos. Above the screen is a Gorilla Glass layer to protect it from scratches. There are three physical buttons on the right-side spine, which are stainless steel. Full marks for the great design and build quality, and we really didn’t see any rough edges. The 1.34-inch display is fairly large and depending on the app or feature you are using at the time, can display a lot of information for you to glance at in one go. However, it is the quality of the display itself which is disappointing. Yes, we understand Huami have gone for a restrained display for the sake of battery life, but this is plainly leaning too much in the direction of dull. If the ambient lighting is any less than perfect, visibility of the screen is immediately impacted. The fact that colours look faded most of the time, and text readability isn’t always optimal, does spoil the experience somewhat. Altering the brightness level doesn’t really make much difference.

For some reason, the Huami Amazfit Stratos doesn’t pair with the Mi Fit app. You need to download a separate Amazfit Watch app (free for Android and iOS) to get this ready for action. Pairing the watch with the phone is a simple task, but we did notice that automatic software updates sometimes don’t install smoothly. We noticed that soon after pairing the watch, there was a firmware update which didn’t install properly in the first three attempts. A lot of fitness wearables tend to have strong software to rely on. Garmin has impeccable algorithms to rely on, Fitbit has a very detailed app that makes it easy for users. However, Huami still has a lot of work to do on the app, the simplicity of navigating the interface and the slickness of it all. The same goes with the software running on the Amazfit Stratos itself, which while ticking off all the requirements boxes, doesn’t look very slick. For instance, post the workout, the options to save the data are not as well laid out.

Huami has integrated the GPS and GLONASS features in the Amazfit Stratos, and that is a strong base to build on for fitness tracking. You name an activity or exercise, and it’ll be primed to track that for you. The buttons on the side allow quicker and finer control of an activity session, without having to trundle through realms of options on the watch. We found that the activity logs, such as step counters, steps climbed, distance run and the mapping via GPS are well in the range of the Apple Watch’s logs—which is a massive positive for the Amazfit Stratos. The build-in heart rate sensor tends to be very slightly conservative with numbers—the Apple Watch would log 82bpm and the Amazfit Stratos would tell us its 79bpm, but that is well within the accepted variation range. 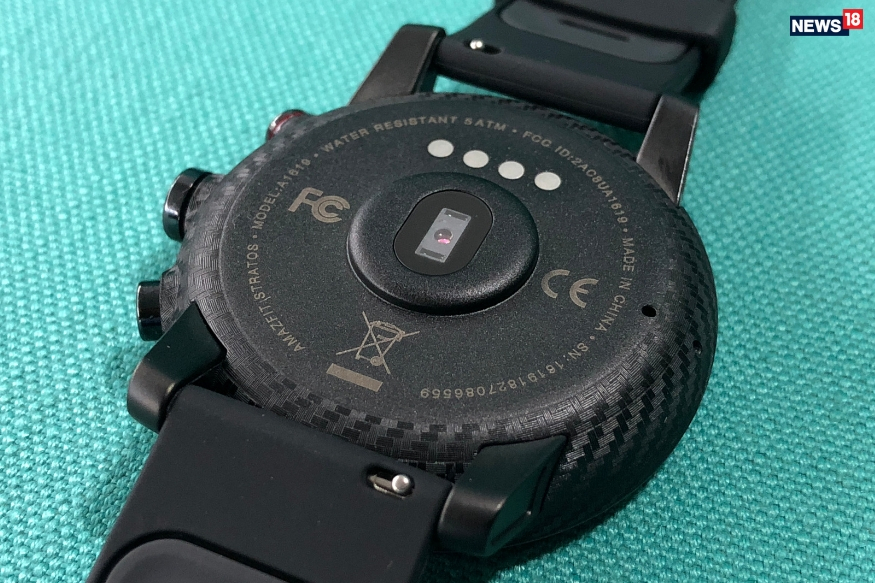 Battery life is a strong point too. This can easily last between 5-7 days on a single charge of battery when used daily for a mix of fitness tracking and regular usage, which means you get through a week without having to bother about charging it. Very very few smartwatches come close, and the Fitbit Versa is one of those that do.

Yes, it is a smartwatch, and it does what a smartwatch is expected to do. The phone calls and message notifications are sent to your wrist as well. However, the watch is simply routing the notifications to you, and you cannot reply to messages from the watch either. That is okay, because we surely would not be too chuffed to tap away on a less than perfect touch display anyway.

It is a complicated thing, this Huami Amazfit Stratos. It is instantly likeable, but you don’t really feel the urge to want one immediately. It looks great, but that isn’t a powerful enough sentiment. The fitness tracking is detailed and accurate, but then you feel that even a first-generation Apple Watch (which is the highest selling Apple Watch even now; priced around Rs19,000) does that and more. You get the idea. The Amazfit Stratos tracks a wide range of activities, has great battery life and looks good. However, we feel that the significantly more utilitarian Apple Watch’s watchOS could serve you better during fitness for tracking data, and beyond. Nevertheless, if you don’t want that extra stuff such as the ability to receive phone calls and replying to messages from the watch itself, the Fitbit Versa smartwatch (around Rs19,000) could be worth considering too. Simply for the excellent app, very consistent design and accurate tracking numbers.