News18» News»Tech»I Used The Samsung Galaxy Z Flip For A While And It Is Equally Beautiful, Folded Or Unfolded
5-MIN READ

I Used The Samsung Galaxy Z Flip For A While And It Is Equally Beautiful, Folded Or Unfolded

The Samsung Galaxy Z Flip’s foldable screen isn’t made of the same materials as your standard smartphone displays. Instead of the hard and scratch resistant glass, it has multiple layers of plastic fused together with an ultra-thin glass added. Hence, it feels softer to touch.

It was back in February that Samsung had added the second foldable phone to its line-up in India, the Galaxy Z Flip. Unlike the Galaxy Fold, this was more in line with convention as far as the unfolded form factor was concerned. We had experienced it then in detail, and absolutely loved what the future was trying to show. In the midst of the Coronavirus lockdown and work from home routines, the good folks over at Samsung made all the efforts to get me the new variant of the Galaxy Z Flip to experience for a few days. This is the Mirror Gold variant, which now joins Mirror Purple and Mirror Black colour options. And a new lower price tag as well, which now reads Rs 1,08,999.

The thing with the Galaxy Z Flip is, it will get attention when it is folded. Into that rather pocketable square-ish form factor. It will get attention when it is unfolded. It is very tall, and it is incredibly slim (its 7.2mm but feels much thinner). And it’ll get attention because of the colour. Mirror Gold shines the brightest. I didn’t use the phone in a case or didn’t mollycoddle it or keep it on a cotton bed and it doesn’t demand any special treatment either. What I didn’t get was a brand-new unit, which means there were some scuff marks present already, but I didn’t notice any additions to it while I used it as just about any other phone. The screen shows no signs of wear, and that is a good thing. I somehow preferred to keep this unfolded on a table while I was working, because the really slim form factor just looks very attractive

Speaking of which, it is always difficult to assess how good a foldable screen might be and how well it’ll hold up over a prolonged period of usage in an initial review. But now that we had some serious mileage on this Galaxy Z Flip unit, it is safe to say that the foldable screen and the hinge are holding up very well indeed. No ripples, no swollen areas and no smudges or creases at all. In fact, it is quite easy to get used to the central crease where the display folds as you swipe vertically and horizontally on the screen. If there was ever a doubt about the longevity of a foldable screen, Samsung has given an emphatic response, at least for the phones that it makes.

Swiping on this display surely feels different. That is because the Samsung Galaxy Z Flip’s foldable screen isn’t made of the same materials as your standard smartphone displays. Instead of the hard and scratch resistant glass, it has multiple layers of plastic fused together with an ultra-thin glass added. Hence, it feels softer to touch as well.

Unfolded, this is a glorious 6.7-inch display. Samsung calls this Infinity Flex, and this most definitely a very immersive display. Since its Dynamic AMOLED, it has what you would expect in terms of rich colours, brightness levels and the overall dynamism. It is HDR10+ capable as well. Settle down with something on Netflix, and you really don’t want the binge-watching session to end. This is great for reading stuff, particularly on web pages. Instagram looks refreshingly different on this phone. There is more than enough display real estate for two apps to open side by side. As for the crease down the center of the display from one side to the other, you will stop noticing it eventually. Just as you probably started to not notice the notch on your phone’s screen. It just becomes a part of the routine, and you no longer get bothered by it. In fact, if you have a bright enough wallpaper and aren’t looking at something with a dark background, the crease isn’t even visible. For a foldable phone, that is a great achievement. 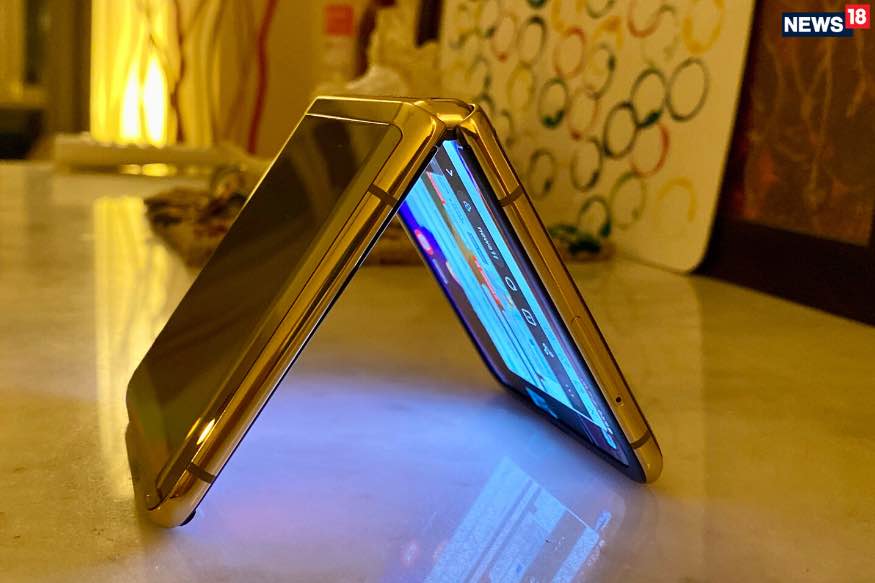 Now that some serious mileage has been clocked on this Galaxy Z Flip unit, it is safe to say that the foldable screen and the hinge are holding up very well indeed

Not to forget that tiny display on the outside, which helpfully brings your attention to any new notifications on the phone if you have kept it folded. Apart from telling you the time. That being said, I somehow preferred to keep this unfolded on a table while I was working, because the really slim form factor just looks very attractive.

Performance remains top notch, as you would expect from a phone powered by the Qualcomm Snapdragon 855+ chipset with 8GB RAM. Its slick all around, no heating of the back panel when you really stress it with multiple apps and battery life (it’s a 3,300mAh battery pack doing the duty) is good enough for a day and a half if you have the adaptive battery optimizations enabled. There is 256GB storage, and at present, this is the only variant available in India.

At the back are dual 12-megapixel cameras which do a good job with photos and videos in good light scenarios. They can do 4K video recording, and the camera app can add a bunch of effects to your photos and videos. What this dual camera setup returns are very good photos as long as the ambient lighting is adequate—be it indoors or outdoors. Good colours, though a bit restrained, lots of detailing and contrast make all the difference. However, when the lighting goes a little dim, there is a significant loss in quality of photos that emerge—there is some amount of noise that is quite visible, and the details get softened out as the image processing goes about trying to compensate.

Back in February, this was hinting at the future. A few months later, the future is ever so much closer to becoming the present. All the trepidation that someone might have had, and rightfully so about the longevity and robustness of a foldable phone, has effectively evaporated. These things hold up well, at least the ones that Samsung makes, and they aren’t shy about showing it off. And why would they. The Samsung Galaxy Z Flip surely made a very solid second impression as well.
Tags