Chairman and Managing Director of Reliance Industries Ltd (RIL), Mukesh Ambani expressed confidence in India’s data-led growth along with ensuring that India will have 100 percent 4G enabled phones by 2020. Ambani speaking at the second edition of the India Mobile Congress on Thursday in New Delhi spoke at length on the positive aspects of the Indian telecom sector strengthened by strong support from artificial intelligence. “India is among the fastest growing large economies in the world. This has happened due to a combination of force-multiplying factors. Most notable among these is the visionary leadership of our Prime Minister Shri Narendra Modiji. During the past five years… he has galvanized India. He has launched a number of transformative initiatives… then in a comparable period anywhere in the world,” said Ambani while referring to Central schemes. The RIL chairman also cited a World Bank report stating that India will have fewer than 3% of its population living under extreme poverty by 2021. “As per a United Nations report as many as 271 million people have been liberated from the prison of poverty in the last decade alone. This is a truly historic achievement and the credit rightly belongs to all our citizens,” he added. Taking a cue from the Startup India scheme, he also has credit for India’s growth to new entrepreneurs. “Those in the telecom, IT and digital space. Never before has India witnessed such an explosion of entrepreneurial spirit. India has moved from the 155th rank in mobile broadband penetration to being the number 1 nation in mobile data consumption in the world… in less than two years. This is the fastest transition anywhere in the world from 2G/3G to 4G,” said Ambani. the past several quarters.
12:48 pm (IST)

"Today we are living in an India of unprecented hope and promise. We are no longer a poor country. By 2021 only 3 percent will live under the poverty line." ~ Mr. Mukesh Ambani, Chairman and Managing Director, Reliance Industries Limited speaking at #IMC2018 pic.twitter.com/11yERt8h5t

"We have to be mindful that data is most important resource in this Digital world" ~ Mr. Mukesh Ambani at #IMC2018

India is ranked 135th rank in terms of broadband connectivity. Jio Fibre will look to change this. Jio Fibre will be offered as widely as possible and at the most affordable rates to take India into the top three in terms of broadband usage. 5G will be the biggest focus for Jio in the Indian market and as such a 5G experience center has been set up to realise the true potential of India's telecom might.

India has an immensely exciting future in terms of telecom due to the prime massive working force the country has. India's entrepreneurs are contributing to India's explosive growth in the mobile sector. Jio is the prime reason for why India is now the country with the highest amount of mobile data usage in the world. Soon India will be having a 100 percent 4G population, Mukesh Ambani says.

With JioGigaFibre I plan to give a push to providing seamless connectivity to everybody. We plan to increase internet connectivity to the last village in tehy country. Jio is aiming to take the digital drive to the villages of India with its JioPhone. The combination of connectivity and affordability is Jio's main USP as it tries to make headway into 4G connectivity for all. The reason behind India's growth in technology has been because of development-oriented policies by Prime Minister Narendra Modi. India is growing at the fastest rate in terms of the digital consumer base. A huge number of new entrepreneurs have come up who are adding to India's growth story. 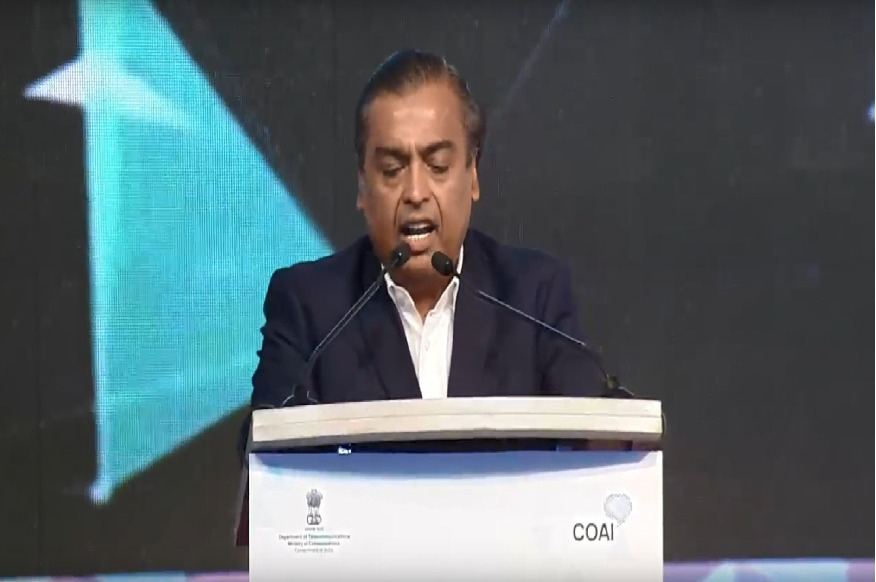 India's data capacity is increasing day by day. The merger of Vodafone and Idea is the first step to join the resources of both the telecom giants to reach a higher audience.

Airtel founder Sunil Mittal has taken the stage-  India has the highest growth of mobile phone users in the world and Airtel has 230 million of them. India's fast emerging eco-system of digital technology needs proper guidance.

"I have seen the power of technology and was part of some of the transformations tech has brought about. Biggest asset of India's transformation is smartphone and the internet." ~ Dr.Youngky Kim, President and Head of #Samsung Networks at #IMC2018#SamsungAtIMC@Samsung_IN pic.twitter.com/pW4LjDT2Ag

Kim is confident about the capabilities of 5G technology. "5G will enable seamless machine to machine to human communication, Facilitate smart Agriculture, and make technologies such as robotics and AI possible," he says.

Ravi Shankar says that mobile phones are integral to realizing the dreams of a digital India. IT Minister Ravi Shankar Prasad takes the stage, explains the vast amount of mobile phone users, and massive penetration of Internet in the country. India also has a massive social media presence along with one of the highest user growth in terms of Internet users. Aruna Sundararajan says that 5G development in the country will be handled by three government departments. India is also the fastest growing telecom market in the world making 5G a very viable option in the country along with AI, smart cities, IoT and more.

NDCP aims to add to the growth of the nation by encompassing latest tech, says Aruna Sundarajan, Secretary Department of Telecom.