Internet, and personal computers in general, were obscure luxuries back in 1995, with 128kbps lease lines costing as much as Rs 2.5 lakh per month.

When the very first commercially available internet plan was introduced to the public, it was by state-operated telecom body, Videsh Sanchar Nigam Limited (VSNL). Back then, not only was the internet a hitherto unheard quality, even personal computers had not taken over households in India. Our PCs, back then, were limited to a select few urban households with solid financial footing, and mostly came with kilobytes of RAM and storage. In such a time, when VSNL brought the internet to India, the primitive mode of connecting to the World Wide Web was not just slow – it was also very, very expensive.

VSNL's internet services came in five tiers – professional, non-commercial, commercial, exporter and service provider. For each tier of users, the connectivity was provided via either dial-up broadband by using the existing telephone optics, or through dedicated internet lease lines. The internet speeds varied among three tiers – the 9.6kbps dial-up, or 64kbps and 128kbps internet lines. At its most affordable, the 9.6kbps dial-up internet line from VSNL was priced at a flat annual rate of Rs 15,000, which you were supposed to pay in one instalment. Adding to this are inflation rates – publicly available inflation tools suggest over 5x inflation of the value of the Indian rupee between 1995 and 2020. At this rate, VSNL's 9.6kbps dial-up internet connection (in today's rupee value) would cost over Rs 75,000 – all for 240 hours of internet access each day, or an average of 40 minutes per day. 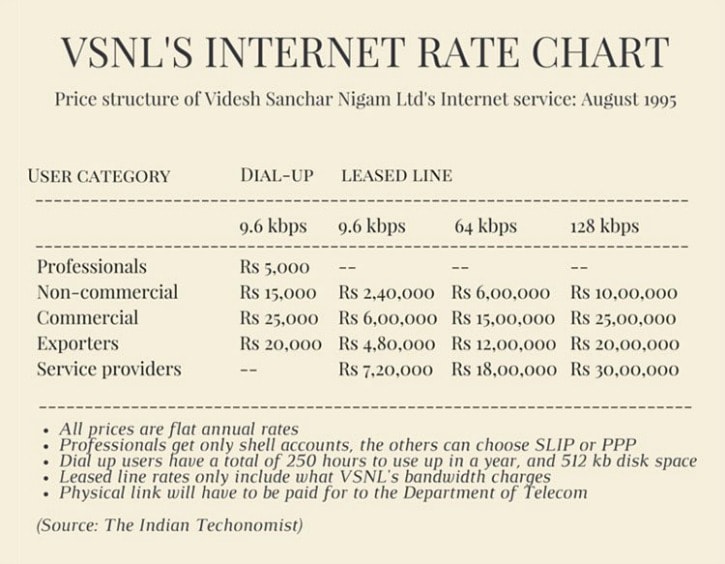 Today, India is privy to some of best internet connectivities at some of the most affordable rates in the world. For mobile internet, the likes of Reliance Jio offers internet data at 4G speeds (theoretically up to 100Mbps) at around Rs 4.15 per GB. For home broadband, the likes of Bharti Airtel offers connections at above 100Mbps speeds with unlimited data at around Rs 1,000. While the price disparity is stark, it is incredible to think how far have we come along in the past 25 years. Today, it is 5G that is waiting to enter India, taking internet speeds up to Gigabit class, even for mobile devices.

Editor’s note: This article is part of News18’s 25 Years of Internet in India series, where we capture how the state of mobile services, home broadband, internet services and content have evolved, particularly in the past few years. We try to understand what the internet means for us, be it for the new reality of work from home, for entertainment of the habit of ‘binge watching’, music streaming, online gaming and more.
Tags: