The Counterpoint report shows that Chinese smartphone brands collectively held 75 percent of the Indian market in 2020, despite rising anti-China sentiment throughout the year.

Smartphone shipments in India fell marginally by 4 percent to reach over 150 million units in 2020, the latest Counterpoint Research data shows. The demand for smartphones during the COVID-19 pandemic-hit year was mostly driven by a boost in work-from-home and e-learning cases. Notably, the Indian smartphone market grew 19 percent YoY in the fourth quarter of 2020 (October to December) as the festive season offers got extended across several online and offline channels. In terms of shipments, Xiaomi emerged as the leading smartphone brand in both 2020 and Q4, followed by Samsung, Vivo, Realme, and Oppo. The Counterpoint report shows that Chinese smartphone brands held 75 percent of the Indian market in 2020, despite rising anti-China sentiment throughout the year.

Realme’s smartphone shipments grew 22 percent in 2020 and crossed the 20 million units mark for the first time. Counterpoint notes that high demand for its budget C-series and Narzo phones were the prime reasons for its growth in Q4 (11 percent share). Oppo’s shipments grew 11 percent YoY in 2020 while remaining flat in the fourth quarter. Other Chinese smartphone makers such as Poco and Transsion Group (Itel, Infinix and Tecno) also posted growth in Q4 YoY. 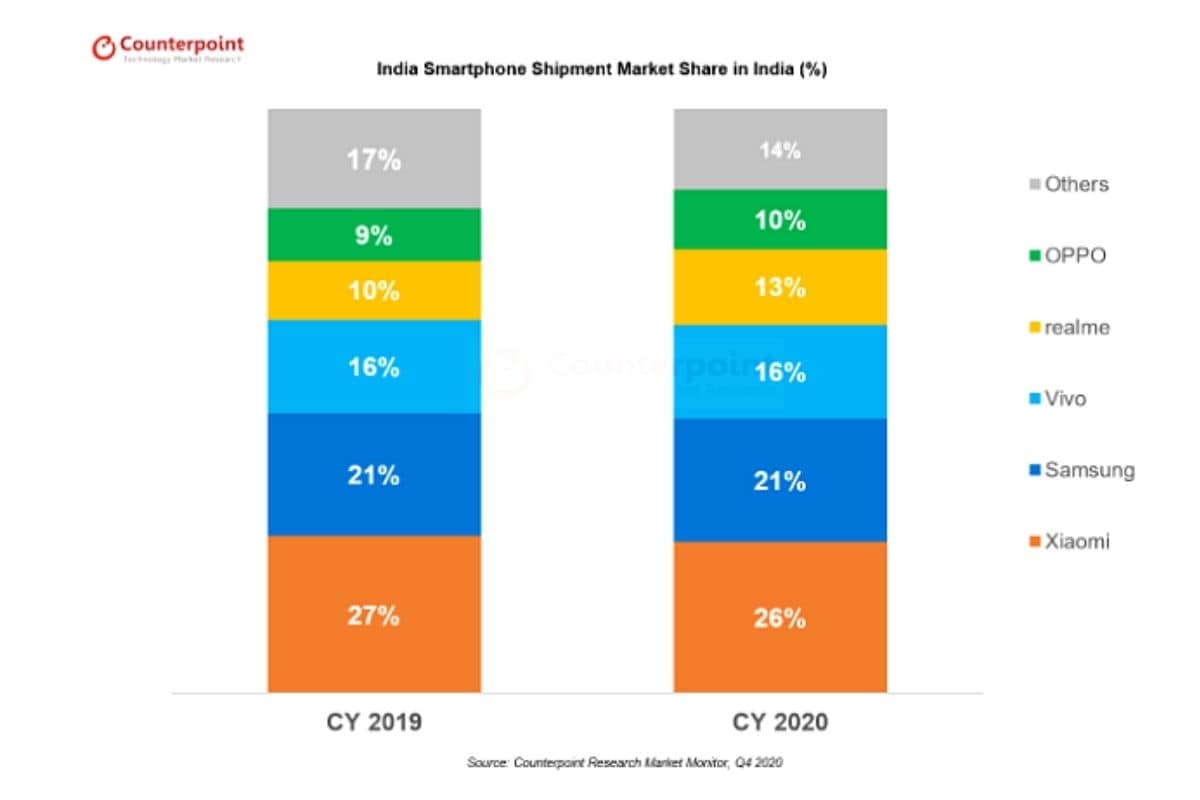 Apple captured the sixth spot in Q4 2020 with 171 percent YoY growth in Q4 and 93 percent YoY growth in 2020. The demand for its devices was driven by the new iPhone 12 series as well as a price drop in erstwhile flagship iPhone 11. Additionally, Apple also launched its e-store in India towards the end of 2020, giving customers the benefit to enjoy its exclusive service and offers. Counterpoint notes that for the first time, Apple crossed 1.5 million shipments in India in a single quarter. On the other hand, OnePlus experienced 200 percent YoY growth in Q4 2020 – driven by its mid-range Nord series and the newly launched 8T series. It re-entered the mid-segment with the Nord series, that made it possible to cross 3 million shipments in a year for the first time.