The Intel 10th gen laptop processor SKUs include all variants from i3, i5 and i7 ranges, along with significant improvements in AI computing and integrated graphics.

Announced at Computex 2019 as a sort-of reply to AMD's massively impressive showing, the 10th gen Ice Lake processors have been launched in two lineups — the U-series processors for standard laptops and ultrabooks, and the Y-series SKUs for super thin, fanless ultrabook designs. As with every generation the Y-series SKUs have lower base clock speed in order to manage heat and processor power. The new processors offer 18 percent higher computing power than their predecessors, along with larger cache memories for lesser buffer and load times for programmes. 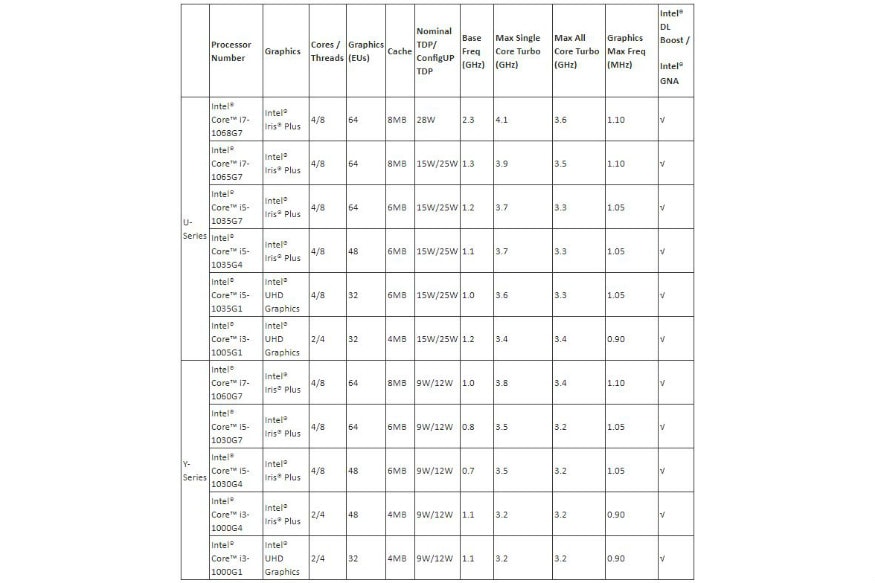 The peak offering of the lineup is the Core i7-1068G7 in the U-series SKUs, offering a quad-core, octa-threaded layout. This is combined with Intel's newly introduced ResNet-50 deep learning interface, added in what is Intel's first generation of processors designed for artificial intelligence tasks from the ground-up. The graphics offering includes Intel Iris Plus, with 64 execution units (EUs) peaking at 1.1GHz core clock speed. In end-user terms, the Iris Plus GPU produces 1TFLOPs of graphics performance, which Intel quoted at Computex to be enough to play Counterstrike: Global Offensive at up to 70fps (over 55 percent higher than Intel UHD 620). Base single core clocks are configured at 2.3GHz, with single-core Turbo boost of 4.1GHz at peak. However, this peak variant also consumes the most amount of power at 28W rated TDP, and we do not expect to see this variant in any machine except the very high-end laptops.

Barring the top-end SKU, all the remaining 5 U-series SKUs are rated at 15W TDP, while the Y-series SKUs are rated at 9W TDP. The base Core i3 configurations offer dual-core, quad-thread layouts, and are powered by the previous generation Intel UHD GPUs for the low-end devices. All the variants offer Wi-Fi 6 (802.11ax) next generation connectivity with multi-gigabit speeds, as well as Thunderbolt 3 support. Given previous trends, expect laptops based on the new processors to be announced soon, although commercial availability of such products by various OEMs may not come around until end-2019, or early 2020.