The Neural Compute Stick platform has already been used for AI based apps that revolve around healthcare and social causes, and the new hardware could be useful for developers looking to train their products with artificial intelligence algorithms.

On the sidelines of the Intel AI DevCon conference in Beijing, the tech giant has unveiled the Neural Compute Stick 2, also known as NCS 2. This device has been developed to help design smarter artificial intelligence (AI) algorithms and would be most useful for developers working on smart home gadgets and what Intel classifies as other network edge devices. The Intel NCS 2 is powered by the latest generation Intel VPU, the Intel Movidius Myriad X. This is the first to feature a neural computing engine, which is a dedicated hardware neural network inference accelerator delivering additional performance.

The Intel NCS 2 runs on a standard USB 3.0 port and requires no additional hardware, enabling users to seamlessly convert and then deploy PC-trained models to a wide range of devices natively and without internet or cloud connectivity, Intel suggests while pitching the simplicity of the NCS 2 stick.

The edge devices are generally any specific pieces of hardware that enable the control of the flow of data between two different networks. Some examples of these include wireless routers, switches and network gateways, as well as a variety of Internet of Things (IoT) gadgets such as smart cameras, smart doorbells, drones with guidance cameras and more. Intel's NCS2 is essentially a fully-capable neural network, inside a form factor no larger than a regular USB drive. This would be useful in the development of smart gadgets and devices by offloading a lot of the required processing power for training the artificial intelligence algorithms for these devices, to its onboard Movidius Myriad X vision processing unit (VPU). 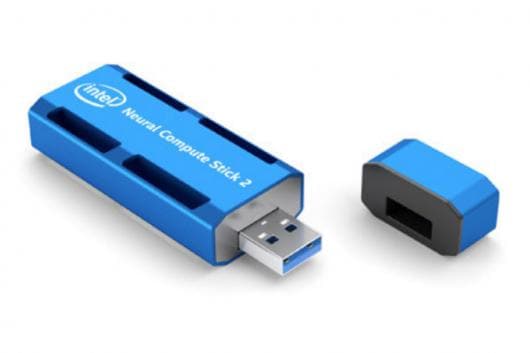 “The first-generation Intel Neural Compute Stick sparked an entire community of AI developers into action with a form factor and price that didn’t exist before. We’re excited to see what the community creates next with the strong enhancement to compute power enabled with the new Intel Neural Compute Stick 2,” said Naveen Rao, Intel corporate vice president and general manager of the AI Products Group, at the launch.

Before the launch, Intel had shared the pre-release versions of the NCS 2 with some developers. One of the apps developed is called ASL Classification, which uses Computer Vision and the Internet of Things to provide a way to train a neural network with labelled American Sign Language images to translate hand gestures in near real-time. Earlier this year, developers used the compute stick platform to develop Clean Water AI which combines machine vision with a microscope to detect any harmful bacteria in water. The other example is called BlueScan AI, which can scan the human skin for signs of melanoma.