The iQoo Z3 5G is a good phone, offering decent performance, acceptable cameras and good battery life, but lacks a telling feature that will really attract you to it.

The iQoo Z3 is here, and with it, so is more competition among smartphones vying for your attention at around the Rs 20,000 range. The mid-range segment has been excitingly active since the past year, particularly since the launch of the OnePlus Nord. Even at the low-Rs 20,000 end, the iQoo Z3 will rival devices such as the Samsung Galaxy F62 and the Galaxy M42 5G, the year-old Vivo V20, the Oppo F19 Pro Plus, the Poco X3 Pro and the Xiaomi Mi 10i – six highly able smartphones. To rival them, the iQoo Z3 comes with an interesting set of specifications.

Despite the very obviously-plastic build, iQoo has done well to smoothen the side edges and joining creases on the Z3. The waterdrop notch could well have been a drill-hole one, but personally, this does not bother me. What does, though, are the considerably thick bezels around the display. At a time when more phone makers have made conscious design decisions to reduce the thickness of bezels, the iQoo Z3 has embarrassingly fat bezels that actually make it look cheaper than it is. 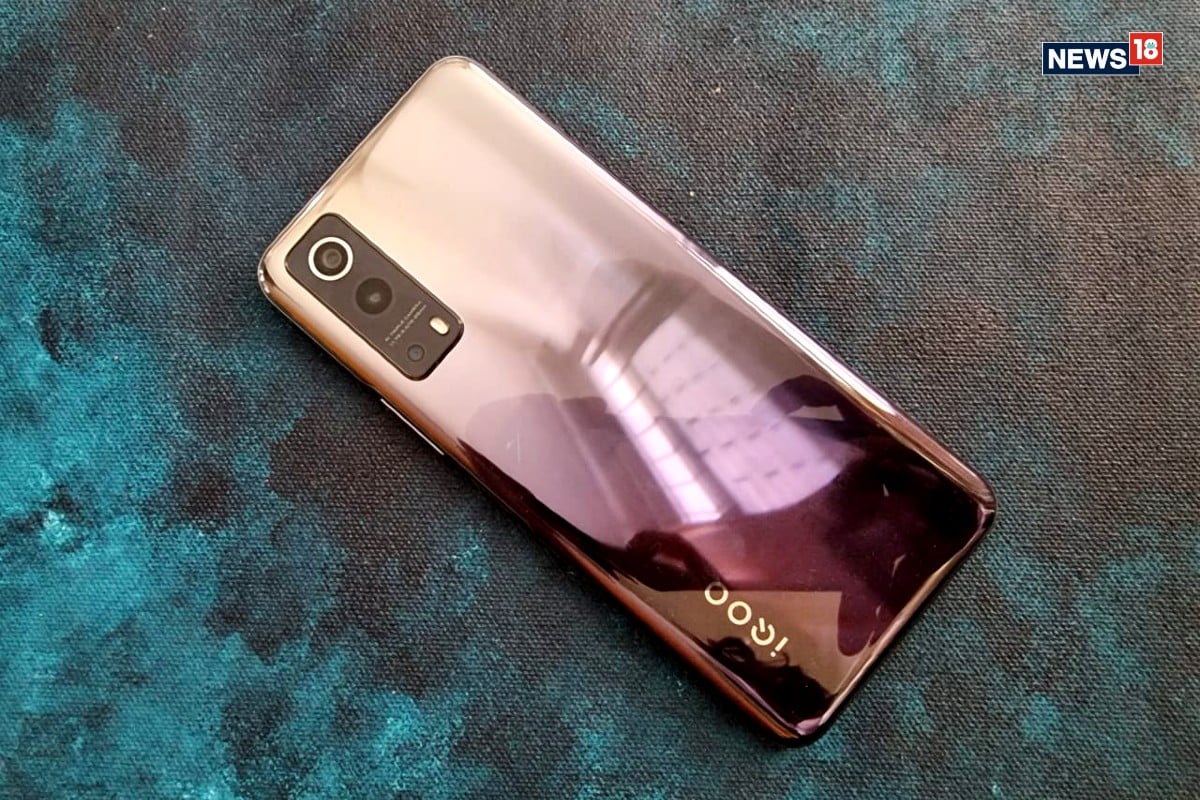 The Ace Black colour variant, meanwhile, makes the phone look even more dull. While it does look better from the back, the finish is a bit too obviously plastic, and here too, the in-hand feel of the phone is mostly in line with budget devices. Ergonomics wise, the iQoo Z3 works well enough – I’m not a big fan of the narrow fingerprint scanner embedded into the power button, but it is accurate enough and does the job. The phone is easy enough to grip and is not slippery. Surprisingly, the shiny plastic back isn’t as bad a fingerprint and smudge magnet as I’d expected it to be, which salvages things slightly for the iQoo Z3.

What also helps salvage matters a bit is the use of a USB-C port (thankfully) and the presence of a 3.5mm audio port as well. On overall terms, the iQoo Z3 is not a looker, and actually looks cheaper than it is. It’s built fine enough, but is lacklustre otherwise.

Display and interface: Good enough screen, but a few questions on software

Once you get beyond the thick bezels around the display, you’d realise that the screen is actually good enough. iQoo’s made a few choices here – cutting back on design costs and likely putting that into the performance department. The 6.58-inch display size is large enough, and supports up to 120Hz refresh rate. You can even set it to adaptive mode to let the display adjust its smoothness automatically, and in our experience, this works just fine. Most scrolls load and operate smoothly enough, and the 180Hz touch sampling rate is good enough for all casual gamers.

The display produces fairly neutral colours by default, and is bright enough for direct sunlight legibility. While the automatic brightness adjustment increases the brightness sharply enough, it isn’t as responsive at dimming, so in darkness, you’d find yourself pulling down the brightness of the screen manually, more often than not. There are no issues with viewing angles, and as far as just the display goes, it’s a win for iQoo. The software, though, isn’t as exciting – you don’t get an Always-on Display, and thanks to the use of FunTouch OS, there is an innate sense of lag that’s annoying over time.

Even searching for specific settings takes up more time than you’d expect, and given its consistency, we are inclined to believe that this is an interface issue rather than a performance one. iQoo also serves the phone with plenty of pre-installed bloatware, which does affect user experience. Thankfully, the pre-installed apps are largely uninstallable (apart from Vivo’s own). This, in real life, is more than capable enough. The iQoo Z3 runs perceptively lag-free when switching between most regular-use apps. These include the likes of Gmail, Instagram, Apple Music, Google Maps, Evernote and Netflix, all of which work smoothly enough. The iQoo Z3 does not aggressively kill its background apps at random, which thankfully means that even with about eight apps open, you can simply get back to your browser page without it reloading. This makes the iQoo Z3 great for most regular users. There is a noticeable sluggishness which arises due to the over-animated transitions of FunTouch OS, and switching them off makes far more sense.

In gaming, the iQoo Z3 works acceptably well. On intense loads in intensive games such as F1 and Call of Duty: Mobile, the iQoo Z3 does show spluttering screen tears, but most stutters came in at hours-long continuous gaming sessions. The overall heat management of the iQoo Z3 is also rather good, making it usable for a long-duration GPS navigation stretch under the Delhi heat. The phone does not get alarmingly hot for the most part, which is good. However, it seldom ever goes below consuming at least 4GB of RAM, which also makes it easy for power users to max out the performance available on the iQoo Z3.

In terms of battery life, the iQoo Z3 offers a work day’s battery life after fairly intense usage. It can last the entire 12-hour stretch even with a heavy number of calls, messages and emails, with a fitness band paired and constant music streaming in the background – and with an hour of gaming and an hour of streaming full HD, 60fps videos on YouTube. Lighter users can get up to 18 hours, but a per-day charge cycle is unavoidable. Thankfully, the 55W fast charger can provide 58 percent power in 30 minutes, and full charge comes up in less than an hour. That makes it easy to juice up if you forget to charge the phone at night.

The iQoo Z3 packs a surprisingly strong rear camera setup. While the levels of details are not range-topping, the iQoo Z3 offers decent image compression to ensure reasonably sharp edges in intricate textures. The 64MP primary rear camera clearly does its job, and photographs in both dim light and excessively bright, broad daylight do well to retain colour accuracy, and acceptable dynamic range. The tonal accuracy is also fairly good, without any major tendency for photos to morph colours. A slight hint of oversaturation persists, though. On the videography front, too, the iQoo Z3 works quite well. As with every FunTouch OS 11 phone, the movie aspect ratio and super anti-shake modes give cinematic overalls to videos, and the stabilisation feature works well to reduce the finer shakes. The ultra-wide unit isn’t a thrilling one per se, but on overall terms, the iQoo Z3 is certainly good enough. It misses out on some of Vivo’s camera apps goodies, such as the motion photos feature, and the overall levels of details do look soft on close-up view, which makes it average in the overall sense. But, for its segment and use case, the iQoo Z3 camera is good enough.

Verdict: Decent enough to be shortlisted

The iQoo Z3 is not exciting enough to be immediately recommendable, but is good enough to be shortlisted. The Samsung Galaxy M42 5G has more premium bearings to make it more palatable for most, but on the performance front, the iQoo Z3 is definitely one of the best. It also has a good enough camera to boot, but lacklustre build quality and a mixed software experience complicate the matter for the Z3. At Rs 22,990, though, the iQoo Z3 should definitely not be overlooked.