The 'space robot' has been developed by scientists at IISc in collaboration with ISRO, and is programmed to behave or react to situations the way humans would.

Exciting times lie ahead for India and its space quest, as the Indian Space Research Organisation (ISRO) firms up plans and timelines for the human space flight, Gaganyaan. ISRO chairman Dr K Sivan announced that two unmanned missions will be sent up and recovered before it — thus testing and proving India's technologies to do the same — before the actual manned mission is taken up. These two unmanned missions will carry with them a half-humanoid, along with a few other experiments on micro-gravity and its effects on humans, said Dr Sivan.

The three-day international symposium of ISRO is a brain-storming session, bringing in space scientists and astronauts from across the world to hold consultations on technologies and challenges for human spaceflights. "The first unmanned mission will be in December, and it may spill over into next year. The second unmanned mission will be six months later, by June 2021. The aim is to conduct a manned mission before August 2022," said Dr Sivan.

Earlier, at the symposium, Sivan said that the deadline of August 2022 was to meet the 75th anniversary of independent India, as desired by Prime Minister Narendra Modi. "It is ambitious to do this, in this time period. But it (the decision) was taken knowing that ISRO has already developed the re-entry systems, recovery systems and crew escape systems. Only missing elements are human life support systems, which we are developing now," he said. Asked to elaborate on the human life support systems that need to be developed, Sivan said there are varied factors. "In space, everything is vaccum. What is there on the ground, we have to create that. There are many things, like pressure shold be maintained at a particular value," he said. There are four short-listed potential astronauts who will be sent to Russia for training by the end of January 2020. They are test pilots from the Indian Air Force. A full-fledged astronaut training centre will also be set up in Benglauru. They would have to be put through a simulated environment of outer space, including being in the prototype of the crew capsule.

The premier space agency of India is collaborating with laboratories from a large number of research and academic institutions, including the Indian Institute of Science (IISc), the Defence Research and Development Organisation (DRDO). Many private organisations and industry players would be involved as well in designing the crew capsule and other things needed for the manned mission.

To create an initial impression at the symposium, the Vyommitra robot was programmed to introduce itself by saying, "I am the prototype of the a half-humanoid being made for the Gaganyaan mission — I can monitor biological parameters, alert you and perform life support operations. I can make all activities like switch panel operation, functions, and more. I can also be your companion, converse with the astronauts, recognise them and can also respond to their queries." 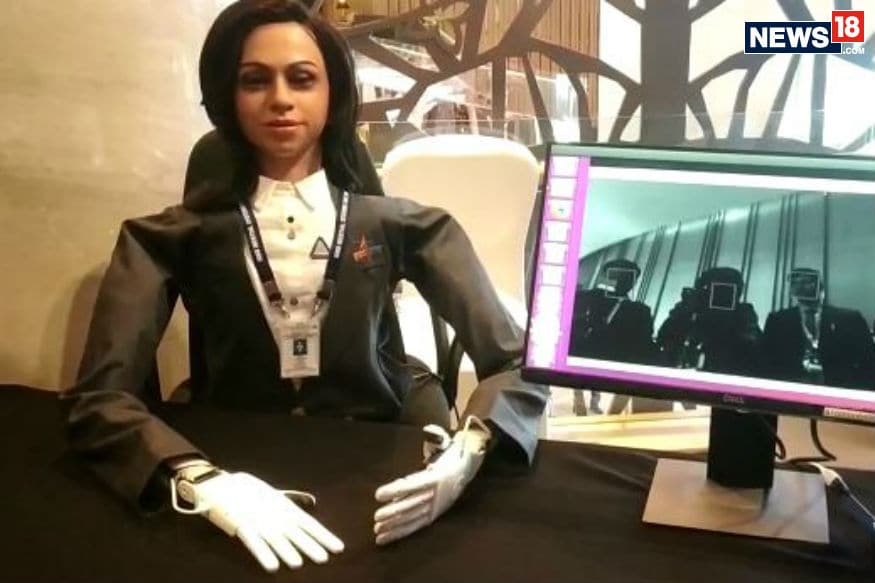 The 'space robot' has been developed by scientists at IISc in collaboration with ISRO, and is programmed to behave or react to situations the way humans would. This is why the space robot is all set to get itself 'beamed up' onto the unmanned mission planned in end-2020, as a precursor to the actual manned mission.

"It is trying to simulate the environment, how a human will feel (in outer space)," says Sam Dayala Dev, Director of the Inertial Systems Unit at Isro, "So it will react to the situation. For example, if there is increase of carbon dioxide or depletion of oxygen (in the crew capsule), the sensor should be able to sense it and report back. It should respond to people's commands, and recognise people and respond in an intelligent way. We are trying to build some artificial intelligence in it too."

Vyommitra would give ISRO scientists cues on what is wrong with the capsule that it is sent up in, and it would stay in outer space for more monitoring. The initial plan is to send it up for about seven days to gauge how it reacts to the stresses of space travel. It will also check if the capsule would be able to bring it back unharmed, and how it reacts to changes in the atmosphere during re-entry from outer space to the earth's atmosphere.

'VyomMitra,' the 'space robot' is the prototype of a half-humanoid being made for #Gaganyaan mission. A humanoid can monitor biological parameters & perform life support operations. It can also converse with the astronauts, recognise them & can also respond to their queries. pic.twitter.com/Vvvzd6LBEq — News18 (@CNNnews18) January 22, 2020

"Making a terrestrial robot is different from a space robot, in the the type of environment it has to undergo. For example, based on how we make implants, similar technologies are being adopted to make the real body (of the humanoid) so that it can withstand the vibration and extreme environment," said Dev.

Medical technology, then, is being used to send up these specimens to space and experiemnt on whether they can withdraw a harsh or adverse environment that human organs are not used to.

Vyommitra is a 'half-humanoid', because it has no legs. The crew capsule is only so big as to accommodate an astronaut in a particular position. "In zero-gravity conditions, legs are not relevant. Mobility is not envisaged. But launch posture it can have, and after that it can come to a normal posture," said Dr Sivan. The robot would also respond to commands from the command centre or the master control facility in Bengaluru, and give feedback on its own to scientists who will be monitoring from Earth.