Lava Probuds Review: Has Stepping Out Of Its Comfort Zone Helped The Homegrown Brand?

Probuds by Lava are the homegrown brand’s first attempt at a set of truly wireless earphones. The company, known for its affordable offerings and feature phones, has most definitely punched above its weight to expand its portfolio. But is it any good?

True wireless earphones have a pretty vast market now, for a category that didn’t even exist a few years back. They became a thing back in 2016, when Apple launched its first-generation AirPods alongside the iPhone 7 series. Today, we have so many truly wireless earbuds in the market that it is almost impossible to count all the products. More so, new brands venture into the TWS earbuds category every now and then, in order to get their piece of the wireless pie. The manufacturer to enter the truly wireless earbuds segment is homegrown smartphone brand Lava. Lava has recently launched its first true-wireless earphones named ‘Probuds by Lava.’ The earphones were launched as an entry-level offering, priced at Rs 2,199. So, does the new-entrant in the market have what it takes to rival popular products from brands such as Realme, Noise, Boat, Xiaomi, and the likes?

Lava claims that audio is the strong point of the Lava Probuds. They come with 5.8mm drivers on each earbud that do a great job in delivering the bass. The sound quality is bass-biased with punchy bass that mostly overshadows other elements of sound. While listening to music, the most prominent aspect is the bass. However, the earbuds do try to deliver good vocals, but lack the solid quality that some of the competitors provide. The sound is more towards the warmer end, and the overall quality is just enough for an average listening experience. The volume is ample for all kinds of environments, but there is no noise cancellation or noise isolation on the Lava Probuds. The Lava Probuds try to isolate outside voices with the fit, but that did not work in my case as it wasn’t the most snug fit in my ears. We also don’t get the ability to adjust the bass or other factors like balance, treble, or other equaliser settings as there is no app to adjust different settings. 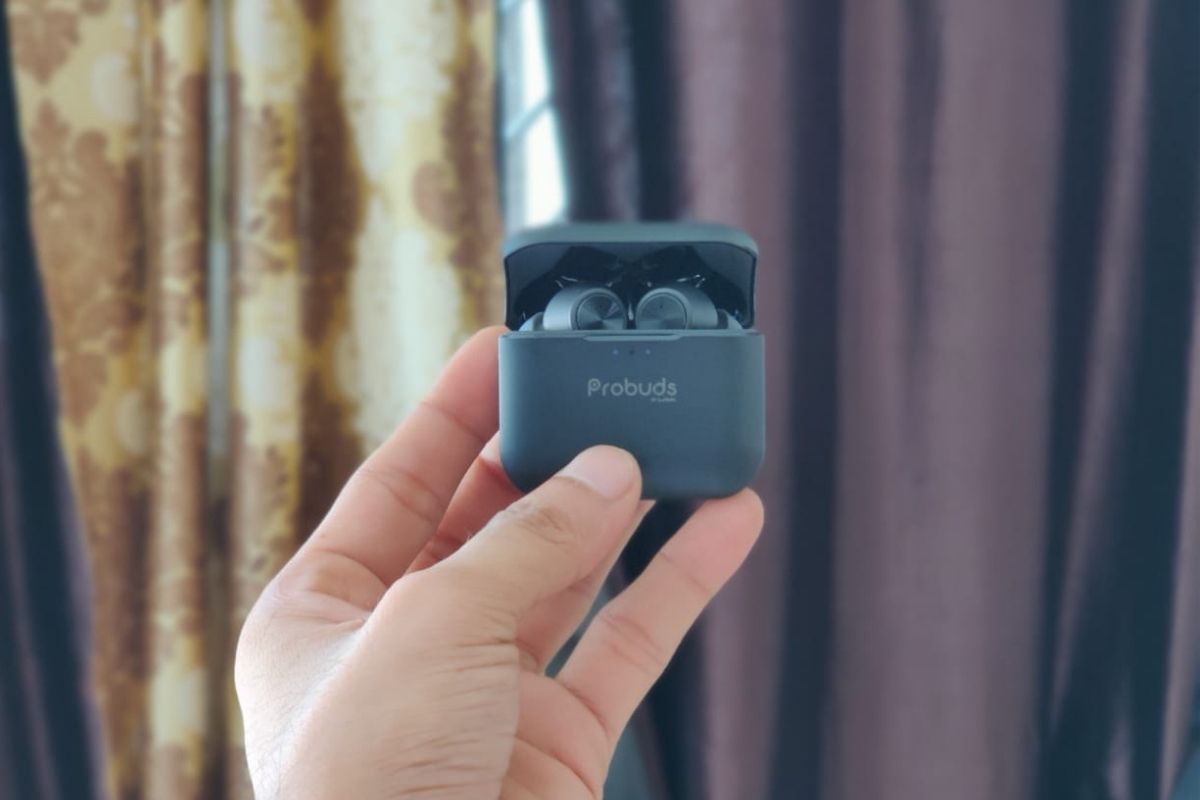 Lava has stuck to the basics in terms of design and it has worked for the company. (Image Credit: News18/ Darab Mansoor Ali)

In terms of design, the Lava Probuds are your conventional affordable truly wireless earphones. They have a matte black rectangular case and earbuds, which have a stem-design that is also matte finish with a glossy disc-like circle up top, adjacent to the silicon eartip. This circle acts as the touch panel for controls. You get two different sizes of detachable silicone eartips with the Lava Probuds. Lava has stuck to the basics with the design, and it has worked well in terms of how it looks. In terms of size also, the Lava Probuds are perfectly compact to fit in any pocket, along with other stuff. However, the quality of material is not nice and the Lava Probuds do not feel well built. Further, the disc-like circular touch panel on the earbud is the only design element that is not matte-finish and may go against the whole aesthetic for some users. I personally had no issues with the way the Lava Probuds look. The micro-USB charging port is located on the right side of the charging case. The lid is magnetic and the earbuds also attach to the case magnetically. The case does feel slightly tacky to hold and feel due to the quality of material used (not by the looks), and the earbuds snap into place perfectly and do not require any effort, thanks to the magnetic slots. In terms of comfort and fit, Probuds from Lava are very lightweight and are quite comfortable. I was able to wear them for more than a couple of hours and my ears did not show any signs of hurting. However, the fit is a little unstable as the eartip did not quite fit into my ear and kept popping out, but that is a very subjective issue since every ear has a different shape. The Lava Probuds are IPX 5 rated for water resistance so using the earphones during workouts is not a problem (except that they kept popping out of my tiny ears every now and then!).

Just like the audio quality on the Lava Probuds, the mic also isn’t the best in segment. The microphone doesn’t always catch your voice and doesn’t isolate ambient noise at all. During video calls and gaming alike, I faced problems with getting my audio through clearly to the other side quite a lot of times. Apart from the audio and mic, the touch controls on the Lava Probuds are also something that require a little bit of getting used to and are not perfect. A lot of times it takes more than one attempt to get the command right and accidental touches are very common. he Lava Probuds are IPX 5 rated for water resistance so using the earphones during workouts is not a problem. (Image Credit: News18/ Darab Mansoor Ali)

Coming to the battery, the Lava Probuds have a 500mAh battery in the charging case and 55mAh battery on each of the earphones. The company claimed that the Probuds put out a total of 25 hours of combined battery life. This, while not tested to the second, is quite close to our own testing of the Lava Probuds. I used these for gaming, video calling, meetings, and calls, everything for at least a couple of hours each day for about two weeks, and the Lava Probuds ran out of battery only once! Great battery life. Probuds by Lava are the homegrown brand’s first attempt at a set of truly wireless earphones. The company, known for its affordable offerings and feature phones, has most definitely punched above its weight to expand its portfolio, and that is appreciated. However, it is very clearly a first-generation product, meaning there are a lot of things to be figured out with the product like the mic, the build quality, the software integration, and even better features like noise isolation. The Probuds are priced at Rs 2,199 and in that segment, there are better products available in the market like the recently launched Realme Buds Q2, the OnePlus Buds Z, Boats Airdopes 441, and more. However, given that this is Lava’s first audio-based product, there is a lot of scope for improvement.